In yesterday's post, I looked at some new photographs from the Hubble Space Telescope of one of the oddest objects in the universe -- the luminous blue variable Eta Carinae.  But that's not the only stunning new research coming from the astrophysicists.  No less than three studies in the last month have given us a new lens into something that has stirred our imaginations for years -- the characteristics of exoplanets.

The number of exoplanets -- planets around other stars -- has grown steadily since the first one was confirmed in 1995.  Today there are over four thousand exoplanets that have been discovered, and they include every possible twist on size and temperature, from "hot Jupiters" (gas giants that orbit so near their parent star that they complete one revolution in only a few days, and are so hot that they could liquify iron) to cool, rocky worlds like our own, to frozen blobs of methane and ammonia like Uranus and Neptune.  In fact, every time we find new worlds, it seems to open up new possibilities about what could be out there.

Let's start with a study that appeared in Nature Astronomy last week, led by Björn Benneke of the University of Montreal, which found a planet in that mid-range mass that doesn't exist in our Solar System -- a "sub-Neptune" or "super-Earth" that's somewhere between the mass of the Earth and the mass of Neptune (seventeen times Earth's mass).

What is extraordinary about this study is that the astronomers who studied this planet were able to determine the nature of its atmosphere from a hundred light years away.  The planet goes by the euphonious name GJ3470b, and its composition was unexpected.  Instead of being enriched in (relatively) heavy gases like methane and ammonia, like the gas giants in our own system, it was made almost entirely of the lightweight gases hydrogen and helium.  It also is so close to its parent star that it completes one revolution in only three days, so it's surprising that its proximity didn't result in the radiation and heat blowing away all of the lighter gases (which is apparently what happened to the inner planets in the Solar System), even considering that the star is a relatively dim red dwarf.

"We expected an atmosphere strongly enriched in heavier elements like oxygen and carbon which are forming abundant water vapor and methane gas, similar to what we see on Neptune," Benneke said in a press release.  "Instead, we found an atmosphere that is so poor in heavy elements that its composition resembles the hydrogen- and helium-rich composition of the Sun."

This brings up lots of questions about why planets have the atmospheres they have -- a relatively new field from which we are only beginning to have enough data to form some tentative hypotheses.

This brings us to the second study, also in Nature Astronomy, published last month and authored by a team led by Sebastiaan Haffert of the Leiden Observatory.  This team studied PDS70, a relatively young star that's 370 light years away, which is currently in the process of forming planets.  What's the coolest about this one is that we're able to observe the planets developing an atmosphere by siphoning off material from the outer layers of the star.


Newly forming protoplanets are expected to create cavities and substructures in young, gas-rich protoplanetary disks, but they are difficult to detect as they could be confused with disk features affected by advanced image analysis techniques.  Recently, a planet was discovered inside the gap of the transitional disk of the T Tauri star PDS 70.  Here, we report on the detection of strong Hα emission from two distinct locations in the PDS 70 system, one corresponding to the previously discovered planet PDS 70 b, which confirms the earlier Hα detection, and another located close to the outer edge of the gap, coinciding with a previously identified bright dust spot in the disk and with a small opening in a ring of molecular emission.  We identify this second Hα peak as a second protoplanet in the PDS 70 system. The Hα emission spectra of both protoplanets indicate ongoing accretion onto the protoplanets, which appear to be near a 2:1 mean motion resonance...  Finding more young planetary systems in mean motion resonance would give credibility to the Grand Tack hypothesis in which Jupiter and Saturn migrated in a resonance orbit during the early formation period of our Solar System.

Taking a step even further back into planet development, the third study, which appeared in Astrophysical Journal Letters in June, a team led by Takashi Tsukagoshi of the National Astronomical Observatory of Japan found a star that is in the early stages of planetary condensation from the "accretion disc" of dust and gas surrounding a young star.  The star, TW Hydrae, is two hundred light years from Earth, and the forming planet is currently a huge blob of luminescent gas whose diameter is about the distance from the Sun to Jupiter.  (The blob is located at a distance from TW Hydrae about equal to the orbit of Neptune.)

Cooler still is they have photographs: 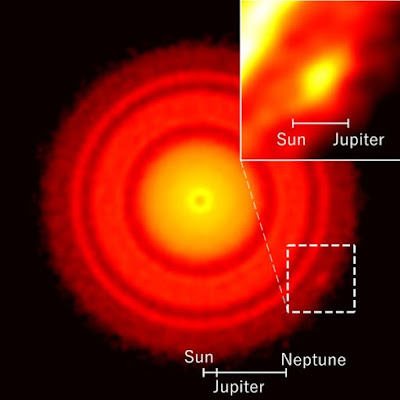 The current supposition is that the blob will eventually condense into a gas giant about the size of Neptune.

The speed with which we're finding out new information about the formation of stars and planets further reinforces my general impression that exoplanet systems like our own are so common out there as to be nearly ubiquitous.  This, of course, further improves the likelihood that at least some of those planets host life.  Some of it, perhaps, intelligent.  Scientists are currently trying to figure out how to detect "biosignatures" on other planets, and it's harder than you'd think; consider that until a hundred years ago, our Earth would have been "radio silent" and therefore nearly invisible to alien astronomers except by the curious abundance of elemental oxygen in our atmosphere.  (Oxygen is so reactive that if there weren't processes continually pumping it into the atmosphere -- photosynthesis, in our case -- it would all eventually get locked up in stable molecules like carbon dioxide and silicon dioxide.)

So keep your eye on the skies.  When you look at the stars at night, consider that many -- probably most -- of the stars you're looking at have their own planetary systems.  And maybe, just maybe, there is an extraterrestrial out there contemplating the skies over its own home world who is looking back at you.