If I had to pick the most paradigm-changing discovery of the twentieth century, a strong contender would be the discovery of red shift by astronomer Edwin Hubble.

What Hubble found was that when he analyzed the spectral lines from stars in distant galaxies, the lines -- representing wavelengths of light emitted by elements in the stars' atmospheres -- had slid toward the red (longer-wavelength) end of the spectrum.  Hubble realized that this meant that the galaxies were receding from us at fantastic speeds, resulting in a Doppler shift of the light coming from them.

What was most startling, though, is that the further away a galaxy was, the faster it was moving.  This observation led directly to the theory of the Big Bang, that originally all matter in the universe was coalesced into a single point, then -- for reasons still unclear -- began to expand outward at a rate that defies comprehension.

There's a simple quantity (well, simple to define, anyhow) that describes the relationship that Hubble discovered.  It's called the Hubble constant, and is defined at the ratio between the velocity of a galaxy and its distance from us.  The relationship seems to be linear (meaning the constant isn't itself dependent upon distance), but the exact value has proven extremely difficult to determine.  Measurements have varied between 50 and 500 kilometers per second per megaparsec, which is a hell of a range for something that's supposed to be a constant.

And the problem is, the value has varied depending on how it's calculated.  Measurements based upon the cosmic microwave background radiation give one range of values; measurements using Type 1A supernovae (a commonly-used "standard candle" for calculating the distances to galaxies) give a different range.

Enter Kenta Hotokezaka of Princeton University, who has decided to tackle this problem head-on.  “The Hubble constant is one of the most fundamental pieces of information that describes the state of the universe in the past, present and future," Hotokezaka said in a press release.  "So we’d like to know what its value is...  either one of [the accepted calculations of the constant] is incorrect, or the models of the physics which underpin them are wrong.  We’d like to know what is really happening in the universe, so we need a third, independent check."

Hotokezaka and his team have found the check they were looking for in the collision of two neutron stars in a distant galaxy.  The measurements made of the gravitational waves emitted by this collision were so precise it kind of boggles the mind.  Adam Deller, of Swinburne University of Technology in Australia, who co-authored the paper, said, "The resolution of the radio images we made was so high, if it was an optical camera, it could see individual hairs on someone’s head 3 miles away." 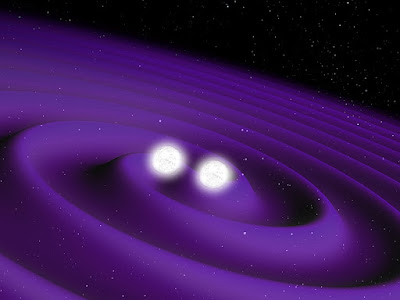 Using this information, the researchers were able to narrow in on the Hubble constant -- reducing the uncertainty to between 65.3 and 75.6 kilometers per second per megaparsec.

"This is the first time that astronomers have been able to measure the Hubble constant by using a joint analysis of a gravitational-wave signals and radio images,"  Hotokezaka said about the accomplishment of his team.  "It is remarkable that only a single merger event allows us to measure the Hubble constant with a high precision — and this approach relies neither on the cosmological model (Planck) nor the cosmic-distance ladder (Type Ia)."

I'm constantly astonished by what we can learn of our universe as we sit here, stuck on this little ball of spinning rock around an average star in one arm of an average galaxy.  It's a considerable credit to our ingenuity, persistence, and creativity, isn't it?  From our vantage point, we're able to gain an understanding of the behavior of the most distant objects in the universe -- and from that, deduce how everything began.

Posted by Gordon Bonnet at 5:14 AM