Rising from the waters

Keeping with an archaeological bent after yesterday's post on Stonehenge, today we're going to take a look at a newly-discovered site in Iraq that was only uncovered -- literally -- because of a terrible drought that made the level of a reservoir drop.  The result was the reappearance of a 3,400-year-old Bronze Age city that was part of a little-known culture that (in fact) I had never heard of -- the Mittani Empire.

The Mittani ruled over a large part of northern Mesopotamia and what is now Lebanon, Syria, and the eastern parts of Turkey, for about two hundred years (1,500 to 1,300 B.C.E.).  They were overthrown by attacks from the much-better-known Hittite and Assyrian Empires, and were broken up into small disjoint settlements that were subsumed into the conquering people.

For a linguistics geek like myself, the coolest thing is that the language they spoke -- Hurrian -- is a linguistic isolate, unrelated to all the surrounding languages as far as we can tell.  In that way, it's rather like Basque -- surrounded by widely-spoken Indo-European languages to which they have no affinity whatsoever.  (There has been speculation that Hurrian is related to the Caucasian languages such as Armenian, but that is controversial and, honestly, has little support amongst the linguists who have studied the languages.)

The Mittani did leave a scattering of place names of Hurrian origin, a bit like the Picts did in Scotland, virtually all of which were eventually superseded by Assyrian, Persian, Hittite, and Arabic names, and their original names mostly forgotten.  Even the capital city -- Washukanni -- was more or less erased from history, and in fact its location is still uncertain.

But now archaeologists have some new information to work with.  Due to a drought, the water behind the Mosul Dam in Iraq has fallen drastically, and much to everyone's amazement the receding waters revealed a city that was part of the mysterious Mittani Empire.  The site is called Kemune, and preliminary work has dated it to about 1,600 B.C.E., although this is tentative at best. 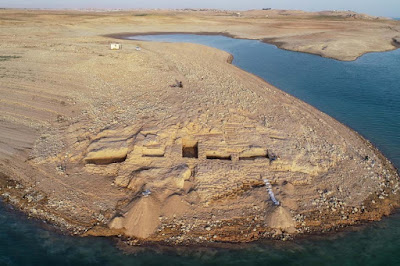 What's most stunning about this discovery is the degree of preservation, considering that not only did it have to deal with the ordinary ravages of time, it's been under water for forty years.  The archaeologists studying the site have found (relatively) intact wall paintings on plaster, not to mention ten clay tablets using a cuneiform script but in the extinct Hurrian language. 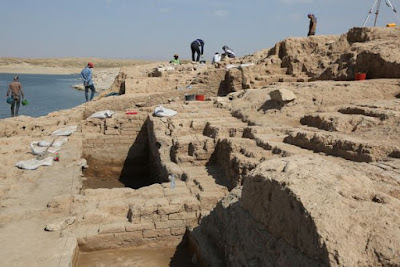 In a press release from the University of Tübingen, which led the research, we read:


The palace ruins are preserved to a height of some seven meters.  Two phases of usage are clearly visible, [team leader Dr. Ivana] Puljiz says, indicating that the building was in use for a very long time. Inside the palace, the team identified several rooms and partially excavated eight of them.  In some areas, they found large fired bricks which were used as floor slabs.  Ten Mittani cuneiform clay tablets were discovered and are currently being translated and studied by the philologist Dr. Betina Faist (University of Heidelberg).  One of the tablets indicates that Kemune was most probably the ancient city of Zakhiku, which is mentioned in one Ancient Near Eastern source as early as the Middle Bronze Age (ca. 1800 BC).  This indicates the city must have existed for at least 400 years.  Future text finds will hopefully show whether this identification is correct.

What the whole thing highlights for me is how little we honestly know about our own ancestors, how much has been erased by conquest and suppression -- or simply forgotten over the centuries.  That we could find something about a culture from 3,400 years ago, whose language is extinct and whose ethnic affiliations are completely unknown, is nothing short of spectacular.  You have to wonder how many more sites are out there, drowned or buried, and are waiting for archaeologists to discover, and what they might tell us about the people who lived so long ago.