Lately there's been a surge of Bigfoot sightings in North Carolina.

These sorts of things are fuel to the cryptozoologists' fire.  Why else, they argue, would you see clusters of sightings, if it wasn't because the animals themselves were present in an area?  I'm inclined to suspect some sort of tame version of group hysteria -- when one person in your neighborhood claims that a large, hairy proto-hominid has been hanging around in their back yard, you're more likely to attribute anything weird -- noises at night, a dumped-over trash can, the silhouette of a black bear -- as falling into the "I saw it too!" department.

Be that as it may, I'm all about evidence, so let's see what we've got.

First, we have Vicky Cook of Shelby, North Carolina, near the city of Charlotte, who claims to have seen a Bigfoot in broad daylight.

Apparently, Cook has been trying to attract Bigfoot for quite some time, to the extent that she puts out bait for them.  "They love peanut brittle, chocolate, and peanut butter sandwiches," Cook says.

So far, her strategy hasn't turned up much but a grainy trail-cam photograph that could be damn near anything.  She has said, however, that the Bigfoots come through quite regularly.  "They just walk through leaving a big mess sometimes," Cook said.  "Broken trees scattered everywhere.  Footprints.  They come into my back yard at night as well.  But never bother anything."

I'm not sure how "broken trees scattered everywhere" jibes with "never bothering anything," but that's just me.

She also doesn't seem surprised that the photo isn't very good.  "If I was to get a clear shot of a Bigfoot standing in the open ... guess how that would go?" Cook says.

I'm not exactly sure what she's getting at.  I think it would go pretty well, myself.  I've often wondered, in these days where everyone has their phone at all times and they go around snapping photographs of everything, why all the Bigfoot pics look like they were taken using the camera's "AutoBlur" function.

Then, there, the report of a "large, bipedal animal covered with hair," from McDowell County, in the western part of North Carolina.  The sighting was from John Bruner, who (like Cook) has been looking for Bigfoot for quite some time.  He takes a different approach, however; instead of attracting them with food, he scatters glow sticks around.  This "piques the curiosity" of the Bigfoots, he says.

Well, he claims that it worked, because he was out hunting for his quarry at night and saw one of the glow sticks start to move.  He gave chase, and got close enough to see it -- it turned and looked at him, then took off too fast for him to follow.

"Its face was solid black, no hair on it," Bruner said.  "The hair looked shaggy all over.  I was able to see details of the creature … like the face, and the hair was matted and stringy.  The eyes were farther apart than human eyes."

Some sightings a couple of months ago in Davie County, however, turned out to cluster around one area for a reason.  Multiple people called in to the authorities to report a Bigfoot with glowing red eyes.  Some of the folks who phoned were hysterical with fear.  Thinking this was enough to warrant at least a cursory look, the Davie County Sheriff's Department sent in their Animal Control Unit, and found... 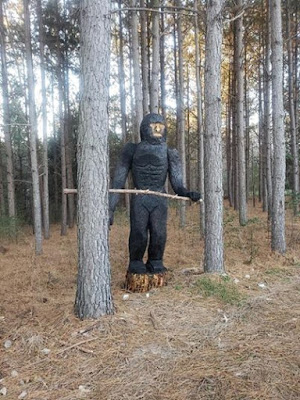 Turns out the property owner thought it'd be fun to put up a Bigfoot statue, given how many times he's allegedly been sighted prowling around the area (Bigfoot, not the owner), which of course resulted in more sightings.  This prompted the authorities to put out a request:


This handsome fellow stands on Pine Ridge Rd. in Mocksville.  If you are traveling this road at night, please be advised that the eyes appear to glow.  If you see this phenomenon, you do not need to call animal control to report seeing Bigfoot, Sasquatch or any other large creature.  Thank you.

Any media outlets with questions about this matter, please contact animal control directly at (336)751-0227.  Do not tie up 911 lines.

So that explains those sightings, at least.

Anyhow, apparently North Carolina is zooming up in the ranks, coming in right after the Pacific Northwest/northern California sightings that got the whole thing going.  Who knew?  I guess the western part of North Carolina is pretty solid forested mountains, just like the Cascades and Olympics, so if the Big Guy likes that kind of terrain, it'd be understandable that he lives there.

The other spot that's been hopping lately, however, is Florida, which has the southern relative of Bigfoot, the "Skunk Ape."  Or maybe they're just elderly Bigfoots who decided to move to Florida when they retired.  They tend to hang out in the Everglades, which seems weird to me, because (as beautiful as the Everglades are) they are home to mosquitoes big enough to carry off your poodle.  If I was a Florida Bigfoot, I think I'd prefer a condo in Sarasota over mucking around in hip-deep mud, trying not to get exsanguinated by flocks of giant bloodsucking bugs, and avoiding cottonmouths and alligators.

But that's just me.

Anyhow, if any of my southeastern readers knows of other sightings, I'd love to hear about it.  And maybe now that I'm retired, I can go looking myself.  Perhaps I should head on down there in January, when up here, it's so cold that you can go out well-wrapped and still freeze off important body parts.  I'll make sure to bring along glow sticks and peanut brittle.