If you're into paranormal research, the word "Stonehenge" is enough to make you shudder.

It's not that it's not an impressive monument, historically important, and culturally unique.  It's definitely all of those things.  It's just that the strangeness of the structure, out there on the bleak Salisbury Plains, invites woo-woo speculation and just plain blather like no other.

With the possible exception of the Pyramids, of course.  Google "secrets of the Pyramids" if you don't believe me, but only click on the links if you have a high tolerance for nonsense.  You have been warned.

Anyhow, whenever I see sites that say "mysteries of Stonehenge decoded!" I always roll my eyes a bit.  But as I've commented more than once, rejecting claims out of hand is just as lazy as accepting them out of hand; cynicism is no better than gullibility, and both are excuses not to think.  So I got my comeuppance at the hands of the Brussels Times with an article called "Belgian Archaeologist Discloses Mysteries of Stonehenge," which turns out not only to be completely legitimate, but truly fascinating. 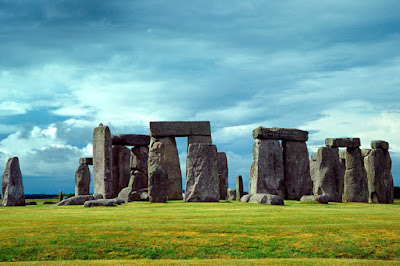 The article is about archaeologist Christophe Snoeck, of the Vrije Universiteit Brussel, who has been working on the archaeology of Stonehenge since he was a graduate student at Oxford.  He's studying the remains of individuals who were cremated at the site, and his analysis of the bone fragments (and the genetic makeup thereof) has shown that they were not part of the native population of Wessex, but seem to have come along with the stones themselves -- which have been known for years to have come from quite a distance, the Preseli Mountains of western Wales.

"By working directly on the human remains found at the site we hoped to gain insight, not on the origin of the stones, but on the origin of those using the site and being buried there," Snoeck said.  "Most research on Stonehenge focused on the stones.  Little was known about the humans buried at the site.  This is mostly due to the fact that they were cremated and only small cremated bone fragments remained.  It is only very recently that new methods have been developed to study cremated human remains."

Snoeck's research gives us a lens into a pre-literate people (or at least one for whom we have no written records), who have therefore been essentially silent for millennia.  Despite what you hear from aficionados of pagan religions, there is almost nothing known about the culture of the early Celts.  Most of the druidic trappings are the results of the 19th-century "Celtic revival" that mysticized -- invented, really -- a religion for these mysterious people.  The little real data we have comes from contemporary accounts; but those writings (such as descriptions by the invading Romans) are not only unflattering, but are almost certain to be largely incorrect, if you judge by other examples of conquerors describing the conquerees.

"By gathering more information about [the early Celts]," Snoeck says, "we can start to understand the place of such sites in the wider landscape and how they shaped societies and beliefs through time and space.  We were very excited to see that not all individuals lived near the site and that many actually moved over quite large distances to come to Stonehenge...  [U]nderstanding how people and societies changed trough time and space helps us understand current societies and how they might change and interact."

So it's nice that we have someone researching the site with a serious eye toward gathering scientifically-relevant data.  Heaven knows there's enough silliness out there on the topic.  It'll be fascinating to see what Snoeck and other archaeologists uncover about Stonehenge's builders, and other related sites such as the dolmens in Brittany.  All of it will give us a window into a long-dead people, whose knowledge, language, and culture vanished beneath the sands of time over two thousand years ago.

Posted by Gordon Bonnet at 5:09 AM