The strangest star in the galaxy

Ever heard of Eta Carinae?

If there was a contest for the weirdest known astronomical object in the Milky Way, Eta Carinae would certainly be in the top ten.  It's a binary star system in the constellation Carina, one member of which is a luminous blue variable, unusual in and of itself, but its behavior in the last hundred or so years (as seen from Earth; Eta Carinae is 7,500 light years away, so of course the actual events we're seeing took place 7,500 years ago) has been nothing short of bizarre.  It's estimated to have started out enormous, at about two hundred solar masses, but in a combination of explosions peaking in the 1843 "Great Eruption" it lost thirty solar masses' worth of material, which has been blown outward at 670 kilometers per second to form the odd Homunculus Nebula.

After the Great Eruption, during which it briefly rose to a magnitude of -0.8, making it the second-brightest star in the night sky, it faded below naked eye visibility, largely due to the ejected dust cloud that surrounded it.  But in the twentieth century it began to brighten again, and by 1940 was again visible to the naked eye -- and then its brightness mysteriously doubled again between 1998 and 1999.

Which is even more mind-blowing when you find out that the actual luminosity of the combined Eta Carinae binary is more than five million times greater than that of the Sun.

This all comes up because the Hubble Space Telescope has just sent astronomers the clearest images of Eta Carinae and the Homunculus Nebula they've yet had, and what they're learning is kind of mind-blowing.  Here's one of the best images: 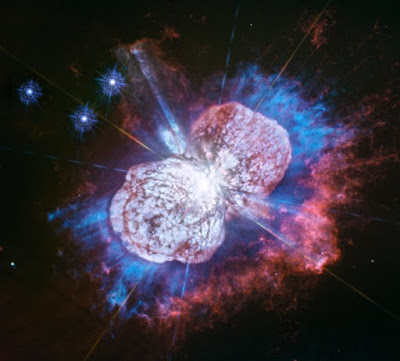 [Image is in the Public Domain, courtesy of the NASA Hubble Space Telescope]

There are a lot of features of these photographs that surprised researchers.  "We've discovered a large amount of warm gas that was ejected in the Great Eruption but hasn't yet collided with the other material surrounding Eta Carinae," said astronomer Nathan Smith of the University of Arizona, lead investigator of the study.  "Most of the emission is located where we expected to find an empty cavity.  This extra material is fast, and it 'ups the ante' in terms of the total energy of an already powerful stellar blast....  We had used Hubble for decades to study Eta Carinae in visible and infrared light, and we thought we had a pretty full account of its ejected debris.  But this new ultraviolet-light image looks astonishingly different, revealing gas we did not see in either visible-light or infrared images.  We're excited by the prospect that this type of ultraviolet magnesium emission may also expose previously hidden gas in other types of objects that eject material, such as protostars or other dying stars; and only Hubble can take these kinds of pictures."

One of the most curious things -- one which had not been observed before -- are the streaks clearly visible in the photograph.  These are beams of ultraviolet light radiating from the stars at the center striking and exciting visible light emission from the dust cloud, creating an effect sort of like sunbeams through clouds.

Keep in mind, though, how big this thing is.  The larger of the two stars in the system, Eta Carinae A, has a diameter about equal to the orbit of Jupiter.  So where you're sitting right now, if our Sun was replaced by Eta Carinae A, you would be inside the star.

The question most people have after learning about this behemoth is, "when will it explode?"  And not just an explosion like the Great Eruption, which was impressive enough, but a real explosion -- a supernova.  It's almost certain to end its life that way, and when it does, it's going to be (to put it in scientific terms) freakin' unreal.  Even at 7.500 light years away, it has the potential to be the brightest supernova we have any record of.  It will almost certainly outshine the Moon, meaning that in places where it's visible (mostly in the Southern Hemisphere) for a time you won't have a true dark night.

But when?  It's imminent -- in astronomical terms.  That means "probably some time in the next hundred thousand years."  It might have already happened -- meaning the light from the supernova is currently streaming toward us.  It might not happen for thousands of years.

But it's considered the most likely star to go supernova in our near region of the galaxy, so there's always hoping.

(Nota bene:  we're in no danger at this distance.  There will be gamma rays from the explosion that will reach Earth, but they'll be pretty attenuated by the time they get here, and the vast majority of them will be blocked by our atmosphere.  So no worries that your friends and family might be at risk of turning into the Incredible Hulk, or anything.)

So that's our cool scientific research of the day.  Makes me kind of glad we're in a relatively quiet part of the Milky Way.  Eta Carinae, and the surrounding Carina Nebula (of which the Homunculus is just a small part), is a pretty rough neighborhood.  But if it decides to grace us with some celestial fireworks, it'll be nice to see -- from a safe distance.

Posted by Gordon Bonnet at 4:29 AM