My friend and fellow writer Andrew Butters (whose blog Potato Chip Math is a must-read) has been the source of a good many topics for posts here at Skeptophilia, so when I get an email from him saying "You gotta check this out," I know I'm in for something good.

A couple of days ago, Andrew sent me a link about something (that even with my perpetual digging for ideas) I'd never heard of -- the "Falcon Lake Incident."  The article is plenty eye-opening, and credibility-wise, this one beats Roswell hands-down.

Without stealing the author's thunder (the article appears over at CBC and was written by Darren Bernhardt, and you should all read the original), here are the bare bones of the story.

In May 1967, an industrial mechanic and amateur geologist named Stefan Michalak went into the wilderness about 150 kilometers east of Winnipeg, searching for seams of silver and quartz.  He had along with him (fortuitously, as it turned out) a set of welders' goggles that he used as eye protection while he was hammering at rocks.

He was near a place called Falcon Lake when he was startled by a sudden commotion that turned out to be a flock of geese taking off from the water en masse.  When he went down to the water's edge, he found out why; there were two "cigar-shaped" UFOs hovering over the water.

One descended and landed on a rock nearby, while the other soared off and disappeared.  He made a quick sketch of the object: 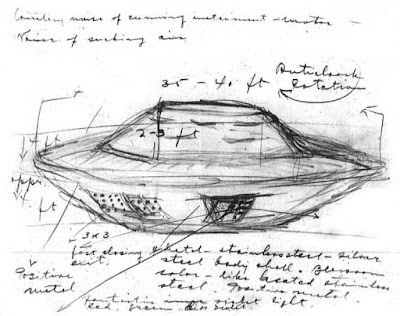 After making the sketch, he approached it, noting that the air around it was warm and smelled of sulfur.  That's when he noticed the open door on the craft's underside.

He made his way closer, and heard voices from within.  He called out to them in English, then in his native Polish -- then in Russian and German.

So he went aboard, pulling on his welding goggles to shield his eyes from the brightness of the interior.

They couldn't, however, protect him from the heat.  Once inside, he touched a panel that burned his glove.  After a few moments on the craft -- during which he didn't see anyone, human or otherwise -- he was suddenly hit in the middle of the chest with a blast of air from a grille in the wall, and he stumbled his way back out of the door.  Shortly afterward, the ship began to turn in a counterclockwise direction and took off, disappearing into the sky.

Michalak wandered, disoriented and in pain, finally finding his way back to Winnipeg, where he was treated for burns on his chest in a pattern of a grid of circles.  He was ill for weeks afterward -- but never varied from his story up to his death in 1999 at age 83.

So that's the claim.  There are a few things to me that are in favor of this being a legitimate story (as opposed to a hoax or an outright lie):
I do have one question, though, that jumped out at me the first time I read the article:  Who uses welding goggles to protect their eyes while hammering rocks?

The purpose of welding goggles is to shield your eyes from bright light that could damage your retinas, and as such they have (very) dark lenses -- so dark that they're almost impossible to see through in ordinary light.  Any amateur geologist on a trek would simply bring along a pair of lightweight safety glasses, not a heavy welding headset that you couldn't see through anyhow.  And given that Michalak was an industrial mechanic, it's not something he'd be likely to mix up -- nor bring along on a hike "just in case."

I would think that it was something the author of the article got wrong, but he's included a photograph of Michalak wearing the goggles in question.  And you can see his eyes.  In the photograph is what looks like a hinged additional frame that probably holds the dark lenses -- the clear glass shown would be no protection at all from an arc welder -- but it still raises the question of why he brought along something that clunky in the first place.  I've done a great deal of back-country camping, and the one cardinal rule is: lighten the load wherever possible, because you're going to be carrying the lot of it on your back for a long while.

So that's peculiar.  Not a fatal flaw, exactly; it could be that the welders' goggles were all he owned, so he brought them along even though they were heavy.  It just struck me as odd.

But that's a small point.  The story has an appealing open-endedness to it; no one ever explained what had happened, there's ample evidence (including a piece of metal now owned by Michalak's son, which is still radioactive), and the man himself seems like about as credible a witness as you could hope for.

If you're interested in reading more, go to the article, which is outstanding, and you'll find information on a newly-released book about the incident, written by Stan Michalak, Stefan's son, and Canadian UFO researcher Chris Rutkowski.  It sounds worth a read.  I'm definitely going to order it, and looking forward to seeing what they have to say -- and what the readers of Skeptophilia think about the whole incident.