Uncanniness in the brain

When The Polar Express hit the theaters in 2004, it had a rather unexpected effect on some young movie-goers.

The train conductor, who (like several other characters) was voiced by Tom Hanks and was supposed to be viewed in a positive light, freaked a lot of kids right the hell out.  It was difficult for them to say exactly why.  He was "creepy" and "sinister" and "scary" -- even though nothing he explicitly did was any of those things.

The best guess we have about why people had this reaction is a phenomenon first described in the 1970s by Japanese robotics professor Masahiro Mori.  Called the uncanny valley, Mori's discovery came out of studies of people's responses to human-like robots (studies that were later repeated with CGI figures like the conductor in Express).  What Mori (and others) found was that faces intended to represent humans but in fact very dissimilar to an actual human face -- think, for example, of Dora the Explorer -- are perceived positively.  Take Dora's face and make it more human-like, and the positive response continues to rise -- for a while.  When you get close to a real human face, people's reactions take a sudden nosedive.  Eventually, of course, when you arrive at an actual face, it's again perceived positively.

That dip in the middle, with faces that are almost human but not quite human enough, is what Mori called "the uncanny valley."

The explanation many psychologists give is that a face being very human-like but having something non-human about the expression can be a sign of psychopathy -- the emotionless, "mask-like" demeanor of true psychopaths has been well documented.  (This probably also explains the antipathy many people have to clowns.)  In the case of the unfortunate train conductor, in 2004 CGI was well-enough developed to give him almost human facial features, expressions, and movements, but still just a half a bubble off from those of a real human face, and that was enough to land him squarely in the uncanny valley -- and to seriously freak out a lot of young movie-goers.

This all comes up because of a study that appeared this week in The Journal of Neuroscience, by Fabian Grabenhorst (Cambridge University) and Astrid Rosenthal-von der Pütten (University of Aachen), called "Neural Mechanisms for Accepting and Rejecting Artificial Social Partners in the Uncanny Valley."  And what the researchers have done is to identify the neural underpinning of our perception of the uncanny valley -- and to narrow it down to one spot in the brain, the ventromedial prefrontal cortex, which is part of our facial-recognition module.  Confronted with a face that shows something amiss, the VMPFC then triggers a reaction in the amygdala, the brain's center of fear, anxiety, perception of danger, and avoidance.

The coolest part of this is that what once was simply a qualitative observation of human behavior can now be shown to have an observable and quantifiable neurological cause.

"It is useful to understand where this repulsive effect may be generated and take into account that part of the future users might dislike very humanlike robots," said Astrid Rosenthal-von der Pütten, who co-authored the study, in an interview in Inverse.  "To me that underlines that there is no ‘one robot that fits all users’ because some users might actually like robots that give other people goosebumps or chills."

This puts me in mind of Data from Star Trek: The Next Generation.  He never struck me as creepy -- although to be fair, he was being played by an actual human, so he could only go so far in appearing as an artificial life form using makeup and mannerisms.  It must be said that I did have a bit more of a shuddery reaction to Data's daughter Lal in the episode "The Offspring," probably because the actress who played her (Hallie Todd) was so insanely good at making her movements and expressions jerky and machine-like.  (I have to admit to bawling at the end of the episode, though.  You'd have to have a heart of stone not to.) 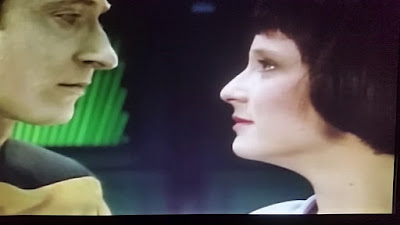 So we've taken a further step in elucidating the neurological basis of some of our most basic responses.  All of which goes back to what my friend Rita Calvo, professor emeritus of human genetics at Cornell University, said to me years ago: "If I was going into science now, I would go into neurophysiology.  We're at the same point in our understanding of the brain now that we were in our understanding of the gene in 1910 -- we knew genes existed, we had some guesses about how they worked and their connection to macroscopic features, and that was about all.  The twentieth century was the century of the gene; the twenty-first will be the century of the brain."