Seems like everyone you meet has a tale of some weird experience or another.

Ghosts, cryptids, time slips, UFOs, precognitive dreams -- taken as a group, they're terribly common.  If you don't believe me, just ask your friends at work or school, "Who here has had an experience that you were completely unable to explain?"  I can pretty much guarantee you'll have five or six volunteers, who will then tell you their story in painstaking detail.

Well, some folks based in Seattle have decided to create a database of all of the bizarre accounts they can find, in an attempt to keep track of "weirdnesses — dreams, ‘coincidences’, strange encounters, etc. — on a personal level."  They go on to explain, "We’ve long wanted to do something that acts sort of like ‘Google Trends’ (which tracks sudden spikes on google search queries) for the collective unconscious.  This map is an extension of that, because we’re trying to see if there are strange places or experiences that are actually quite common but go unnoticed because everyone is afraid to talk about this weird stuff happening to them." 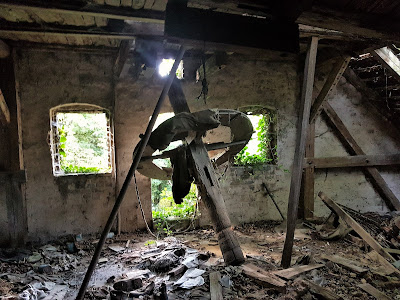 The project is called Liminal Earth, and is open to submissions from anyone.  They categorize the stories (and map pins) into some broad categories, as follows.  (And just to say up front: this is copied directly from their website, so the subcategories are not me being a smartass, which to be fair happens fairly often):

Okay, this brings up a few questions.
I'm not sure what all of this is supposed to accomplish, because (as I've commented many times) the plural of "anecdote" isn't "data," but I suppose it's a start at least to attempt some kind of catalog of people's odd experiences.  The difficulty is twofold; first (as we've also seen many times) the human perceptual/interpretive apparatus is pretty inaccurate and easily fooled, and second, this sort of thing is just begging hoaxers to clog up the works with made-up stories.  (Although it must be said that I've never understood hoaxers.  I suppose the "five minutes of fame" thing probably explains some of them, but since growing out of a tall-tale-telling stage as a child, I've never understood the draw of inventing far-fetched stories and claiming they're true.)

Be that as it may, I invite you to submit your own experiences to Liminal Earth if you're so inclined.  I can't say I've ever had anything happen to me that seems inexplicable, so I don't honestly have anything to contribute myself.  Except maybe that my home village used to have a cupcake shop that was wonderful, and they suddenly went out of business.  And I would definitely like an explanation for that one, because those cupcakes were awesome.