I think part of my enjoyment of science is that I love a good mystery.

The universe is endlessly fascinating and also endlessly complicated, and if you get into science you'll never want for new things to learn about.  You'll also be pushing the edges of what we can explain.  Some fairly simple-to-ask questions that we still haven't solved:

So if you like to wonder about stuff, immerse yourself in science.  I can promise you you'll never be bored.

This comes up because of some weird behavior by one of the oddest things in the universe: black holes.  You probably know that a black hole is a collapsed supergiant star, an object that is so massive that it warps space into a closed shape.  Even light can't escape (thus the name).  Around the border of a black hole is the event horizon, which is the point of no return -- when you cross it, you'll never escape, and will ultimately fall into the singularity at the center.  But you'll be dead long before then, torn to shreds by the tidal forces as you approach (a process astrophysicists have nicknamed, no lie, spaghettification.)

Black holes, though, aren't necessarily produced by the collapse of a single star.  It's thought that most galaxies have massive black holes at their center.  The Milky Way has one with the unprepossessing name Sagittarius A*, which becomes a little more impressive when you find out that it has four million times the mass of the Sun.

You might wonder how (being black) it was detected.  As matter falls into a black hole, it accelerates, and in the process emits radiation.  (Sort of an electromagnetic death scream, is how I think of it.)  Being as massive as it is, Sagittarius A* has quite a signature in the radio region of the spectrum, which is how it was first detected way back in 1931. 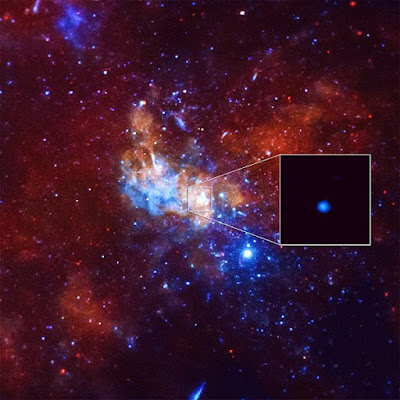 Sagittarius A* [Image is in the Public Domain, courtesy of NASA]

What got me thinking about this is that Sagittarius A* has been acting rather strangely of late.  Like most black holes studied, it does fluctuate in its energy output, presumably as the amount of matter falling into it varies.  But back in May of this year, its luminosity in the near-infrared region of the spectrum increased by a factor of 75...

"The brightness of Sgr A* varies all the time, getting brighter and fainter on the timescale of minutes to hours—it basically flickers like a candle," said study leader, UCLA astronomer Tuan Do.  "We think that something unusual might be happening this year because the black hole seems to vary in brightness more, reaching brighter levels than we've ever seen in the past...  Many astronomers are observing Sgr A* this summer.  I'm hoping we can get as much data as we can this year before the region of the sky with Sgr A* gets behind the Sun and we won't be able to observe it again until next year...  Maybe the black hole is waking up—there's a lot we don't know at this point so we need more data to understand if what we are seeing is a big change in what is feeding the black hole or this is a brief event."

Whatever it is, it certainly is intriguing.  Such a rapid and massive increase in luminosity from such an enormous object is hard even to wrap your brain around.  All of which just goes to show that even when you have a pretty good idea of how the universe works, it can turn around an astonish you.

Which, after all, is what science is all about.