A new twig on the family tree

My long-ago professor of evolutionary biology, Dr. Andrew Collins, once said, "The only reason humans came up with the concept of species as little air-tight boxes is that we have no near relatives still alive."  After a pause, he added, "And it's also the reason why evolution isn't completely self-evident to everyone."

I've always remembered that -- the word "species" is an artificial construct, and is the hardest concept in biology to come up with a consistent definition for.  No matter how you define it, you come up with exceptions and qualifications (something I dealt with a while back in my post "Grass, gulls, mosquitoes, and mice"), and it's only our determination that nature should be pigeonholeable (to coin a word) that keeps it in the textbooks.

We had a lovely example of that announced this week, when we learned that a stunningly well-preserved 3.8-million-year-old skull from Ethiopia had been identified as Australopithecus anamensis.  This species had been thought ancestral to A. afarensis (the species to which the famous Lucy belonged), but the Ethiopian skull (nicknamed MRD after Miro Dora, the site where it was discovered) is the same age as the earliest clearly A. afarensis remains.

So it looks like the two coexisted at least for a while, which is actually a much more common thing than the textbook one-species-slowly-morphing-into-another model.  Take, for example, our own (much more recent) ancestry, when only fifty thousand years ago there was enough interbreeding between Neanderthals, Denisovans, and anatomically-modern humans that we still find significant traces of each of those lineages in our own DNA.  (When I had my own DNA sequenced, I was proud to find out that I had 284 clearly Neanderthal markers, putting me in the 60th percentile and possibly explaining why I eat my t-bone steaks rare and like running around with little to no clothing on.)

The current discovery, though, is awfully cool.  Here's the skull itself, and a reconstruction of what its owner might have looked like, by the amazing John Gurche: 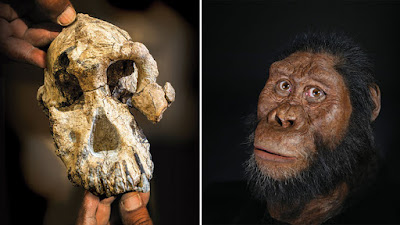 As an aside, John Gurche lives in the same little upstate New York village that I do, and I was privileged to teach all three of his kids.  His son, Loren, is now a paleontologist in his own right, and even when he was an eleventh grader in my AP Biology class he so clearly knew more about extinct animals than I did that I gladly asked him to contribute every time the topic came up in class.

Anyhow, the whole thing is wicked cool.  Picture it; an African savanna with not just one, but several different kinds of proto-hominins running around, some of them quite human-like and others more similar to our ape ancestors.  I'm always a little astonished at people who find the idea of our non-human ancestry demeaning -- I think it's grand that we're connected, in a series of unbroken links extending back three billion years, to every other life form on Earth.

And the whole thing took place, for the most part, in a smooth set of small changes, almost indistinguishable without the advantage of a huge time scale.  As Charles Darwin put it in The Descent of Man, "In a series of forms graduating insensibly from some apelike creature to man as he now exists, it would be impossible to fix on any definite point where the term 'man' ought to be used."