Because my other choice is writing about how Donald Trump said in a public speech last week that if you use wind power to generate electricity, your television will go off if the wind stops blowing, I've decided to focus today on: supernova dust in Antarctica.

Supernovas are one of the most awesome phenomena known.  They are so powerful astronomers estimate that if one occurred within 150 light years of the Earth, it would cause planet-wide ecological catastrophe (and the evidence is strong that such events have actually contributed to or caused mass extinctions in the past).

Two things about that to keep in mind:
Even so, they're pretty awesome events, and I'd love to witness one, although if it was nearby the destruction of the ozone layer by the radiation pulse and the frying of every living thing on Earth that would follow would be an unfortunate downside. 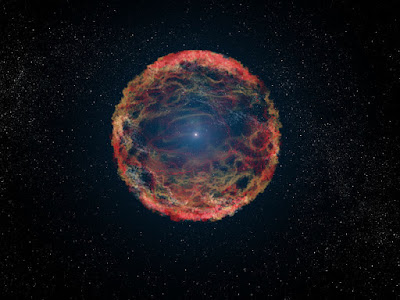 Because of their violence, and the potential effects on the Earth, astronomers have been fascinated by this phenomenon for some time.  So it was pretty exciting when a recent study of snow in Antarctica found traces of dust that were produced by a nearby supernova that exploded some time in the past few million years.

The researchers melted five hundred kilograms of pristine Antarctic snow and found substantial traces of two radioactive isotopes that shouldn't exist on Earth -- iron-60 and manganese-53.  Both are produced in the cores of supernovae, and they have half-lives of 2.7 and 3.3 million years, respectively.  Because the Earth has been around about two thousand times longer than that, all of these isotopes have decayed away in the interim.  So finding them in Antarctic snow is pretty spectacular.

It's thought that the dust was brought to Earth not by being ejected at it, but because the Solar System was swept through the cloud of debris left behind as it orbits the center of the galaxy.  The authors write:


Earth is constantly bombarded with extraterrestrial dust containing invaluable information about extraterrestrial processes, such as structure formation by stellar explosions or nucleosynthesis, which could be traced back by long-lived radionuclides.  Here, we report the very first detection of a recent Fe-60 influx onto Earth by analyzing 500 kg of snow from Antarctica by accelerator mass spectrometry.  By the measurement of the cosmogenically produced radionuclide Mn-53, an atomic ratio of Fe-60/Mn-53=0.017 was found, significantly above cosmogenic production.  After elimination of possible terrestrial sources, such as global fallout, the excess of Fe-60 could only be attributed to interstellar Fe-60 which might originate from the solar neighborhood.

What I find most striking about this is that we can infer information about a supernova explosion in our near vicinity by analyzing a bunch of snow.  Our technology and scientific prowess has increased to a point that is astonishing -- and I say that even with the recognition that we still have a long, long way to go.  (C'mon, scientists.  I want my personal transporter, holodeck, and replicator.  Tea, Earl Grey, hot, anyone?)

So that's the latest in the Cool Scientific Discoveries department.  Even more amazing when you realize that our country is being led by a man who says that windmills were "Hillary Clinton's idea", and that the noise they make causes cancer.  But don't dismiss what he's saying, folks.  After all, in his own words, "I know a lot about wind."