It's the end of the world, if you notice

I have commented more than once about my incredulity with regards to end-of-the-world predictions.  Despite the fact that to date, they have had a 100% failure rate, people of various stripes (usually of either the ultra-religious persuasion or the woo-woo conspiracy one) continue to say that not only is the world doomed, they know exactly when, how, and why.  (If you don't believe me, take a look at the Wikipedia page for apocalyptic predictions, which have occurred so often they had to break it down by century.)

As far as why this occurs -- why repeated failure doesn't make the true believers say, "Well, I guess that claim was a bunch of bullshit, then" -- there are a variety of reasons.  One is a sort of specialized version of the backfire effect, which occurs when evidence against a claim you believe strongly leaves you believing it even more strongly.  Way back in 1954 psychologists Leon Festinger, Henry Riecken, and Stanley Schachter infiltrated a doomsday cult, and in fact Festinger was with the cult on the day they'd claimed the world was going to end.  When 11:30 PM rolled around and nothing much was happening, the leader of the cult went into seclusion.  A little after midnight she returned with the joyous news that the cult's devotion and prayers had averted the disaster, and god had decided to spare the world, solely because of their fidelity.

Hallelujah!  We better keep praying, then!

(Note bene: The whole incident, and the analysis of the phenomenon by Festinger et al., is the subject of the fascinating book When Prophecy Fails.)

Despite this, the repeated failure of an apocalyptic prophecy can cause your followers to lose faith eventually, as evangelical preacher Harold Camping found out.  So the people who believe this stuff often have to engage in some fancy footwork after the appointed day and hour arrive, and nothing happens other than the usual nonsense.

Take, for example, the much-publicized "Mayan apocalypse" on December 21, 2012 that allegedly was predicted by ancient Mayan texts (it wasn't) and was going to herald worldwide natural disasters (it didn't).  The True Believers mostly retreated in disarray when December 22 dawned, as well they should have.  My wife and I threw a "Welcoming In The Apocalypse" costume party on the evening of December 21, and I have to admit to some disappointment when the hour of midnight struck and we were all still there.  But it turns out that not all of the Mayan apocalyptoids disappeared after the prediction failed; one of them, one Nick Hinton, says actually the end of the world did happen, as advertised...

Hinton's argument, such as it is, starts with a bit of puzzling over why you never hear people talking about the 2012 apocalypse any more.  (Apparently "it didn't happen" isn't a sufficient reason.)  Hinton finds this highly peculiar, and points out that this was the year CERN fired up the Large Hadron Collider and discovered the Higgs boson, and that this can't possibly be a coincidence.  He wonders if this event destroyed the universe and/or created a black hole, and then "sucked us in" without our being aware of it. 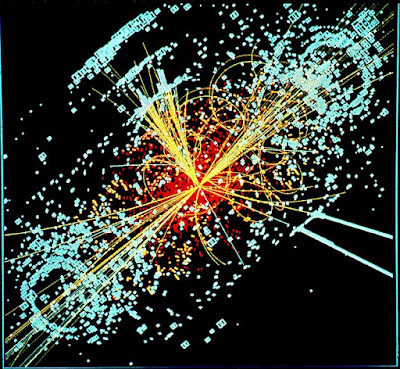 Me, I think I'd notice if I got sucked into a black hole.  They're kind of violent places, as I described yesterday in my post about Sagittarius A*.  But Hinton isn't nearly done with his explanation.  He writes:


There's the old cliché argument that "nothing has felt right" since 2012.  I agree with this... [E]ver since then the world seems to descend more and more into chaos each day.  Time even feels faster.  There's some sort of calamity happening almost daily.  Mass shootings only stay in the headlines for like 12 hours now.  Did we all die and go to Hell?...  Like I've said, I think we live in a series of simulations.  Perhaps the universe was destroyed by CERN and our collective consciousness was moved into a parallel universe next door.  It would be *almost* identical.

Of course, this is a brilliant opportunity to bring out the Mandela effect, about which I've written before.  The idea of the Mandela effect is that people remember various stuff differently (such as whether Nelson Mandela died in prison, whether it's "Looney Tunes" or "Loony Tunes" and "The Berenstein Bears" or "The Berenstain Bears," and so forth), and the reason for this is not that people's memories in general suck, but that there are alternate universes where these different versions occur and people slip back and forth between them.

All of which makes me want to take Ockham's Razor and slit my wrists with it.

What I find intriguing about Hinton's explanation is not all the stuff about CERN, though, but his arguing that the prediction didn't fail because he was wrong, but that the world ended and six-billion-plus people didn't even notice.  Having written here at Skeptophilia for almost nine years, I'm under no illusions about the general intelligence level of humanity, but for fuck's sake, we're not that unobservant.  And even if somehow CERN did create an alternate universe, why would it affect almost nothing except for things like the spelling of Saturday morning cartoon titles?

So this is taking the backfire effect and raising it to the level of performance art.  This is saying that it is more likely that the entire population of the Earth was unaware of a universe-ending catastrophe than it is that you're wrong.

Which is so hubristic that it's kind of impressive.

But I better wind this up, because I've got to prepare myself for the next end of the world, which (according to the late psychic Jeane Dixon) was going to occur in January of 2020.  Which only gives me a few months to get ready.  So many apocalypses, so little time.