Messages in our genes

Yesterday a friend and long-time loyal reader of Skeptophilia sent me a link to a bizarre claim from a couple of scientists in Kazakhstan tying together two of my favorite subjects: genetics and linguistics.

It's also a good opportunity to apply Betteridge's Law, which says that any headline that ends in a question mark can be answered "no."  The link was to a story in Ancient Origins entitled, "Are Alien Messages Encoded in our DNA?"  ("No.")

The gist of the claim is that the Earth was seeded early in its history by aliens, and that all terrestrial organisms have DNA sequences that encode messages from these aliens.  My first thought was that the scientists had mistaken the Star Trek: The Next Generation episode "The Chase" for a non-fiction documentary. 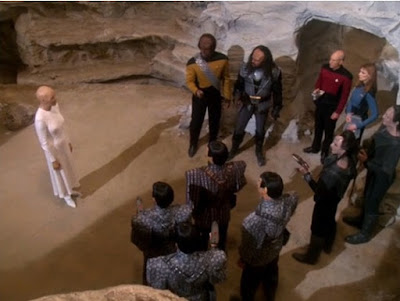 But apparently this isn't the case.  The scientists, Vladimir Sherbak and Maxim Makukov, claim that they've discovered a numerical pattern in DNA that is non-random (and presumably independent of the patterns dictated by its genetic information).  "Once fixed, the code [in our DNA] might stay unchanged over cosmological timescales," Makukov said. "Therefore it represents an exceptionally reliable storage for an intelligent signature...  Simple arrangements of the code reveal an ensemble of arithmetical and ideographical patterns of symbolic language.  Furthermore, it includes the use of decimal notation and logical transformations that are accurate and systematic."

Okay, I have a variety of problems with this.

First, the genetic problem.  There is no DNA sequence that stays "unchanged over cosmological timescales," with the exception of the very few sequences that are so strongly selected for that any mutation in them would kill the organism.  (An example is the gene for cytochrome c, which is nearly identical in every aerobic organism studied.)  Other sequences accrue mutations at a fairly steady rate, which is why (other than the noted exceptions) your DNA is different from that of a pine tree.  So if the aliens had dumped some meaningful sequence of nitrogenous bases into the primordial soup, the likelihood of the sequence surviving three billion years of random mutations is effectively zero.

Second, though, there's the linguistic problem, which boils down to "you can find a pattern in any string of symbols if there are no rules by which you analyze it, and the pattern could be anything."  I wrote about this all the way back in 2012, when a guy named Michael Drosnin claimed that if you mess around with the Hebrew text for the five books of the Torah, you can find passages that predict everything from the Holocaust to the assassination of Yitzhak Rabin.  Drosnin's method was completely bass-ackwards; he didn't have any particular message he was looking for, and used an algorithm that looked at every possible sequence of symbols (every other letter, every third letter, every fourth, etc.) until he found something that seemed meaningful.

Then mathematician Brendan McKay showed that he could do exactly the same thing with the novel Moby Dick.  And I don't think Drosnin, or anyone else, thinks that Moby Dick was divinely inspired.

So for a variety of reasons, the claim by Sherbak and Makukov doesn't really hold water.  Our DNA does contain an important message -- the instructions for building every protein we make -- but that doesn't mean that it was put there by aliens, nor that there's any other message there waiting to be found.  As always, I'm fascinated enough with the science; I don't need any pseudoscientific gobbledygook to add seasoning to the mix.