It's important to keep your brain connected when you read articles in popular media that start with the line, "Scientists Have Just Discovered That..."

Between the lure of advertiser revenue from clickbait and the simple fact that a lot of laypeople can't tell peer-reviewed science from loony claims, it's easy to get fooled.  I saw a pretty egregious example of that a couple of days ago, in an article that claimed that scientists have shown that "intentionality" changes the spoil rate of cooked rice. 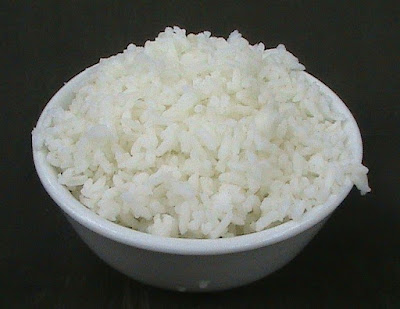 No, I'm not making this up.  I found the original research -- if I can dignify it by that name -- in the Journal of Scientific Exploration, which a little bit of digging suggests a specialty in fringe-y, and sometimes cringe-y, claims.  The paper is entitled "Human Mental Intentionality on the Aesthetics of Cooked Rice and Escherichia coli Growth," by Alan W. L. Lai, Bonny B. H. Yuen, and Richard Burchett, of Beijing Normal University, Hong Kong Baptist University, and the United International College of Guangdong Province (China), respectively.

The gist of the experiment was that they had a group of people think happy thoughts at a bowl of cooked rice, a second thought think negative thoughts, and a third group think neutral thoughts, then had people evaluate the bowls of rice for their "aesthetics," and also measured the amount of E. coli growth in each bowl.  Now for myself, the amount of E. coli I want in my bowl of rice is zero, but apparently that's not a likely outcome.  The authors write:


This study examines the “intentionality hypothesis”—i.e. subjects’ ability to mentally infl uence microbial growth in samples of cooked rice.  Over a 30-day period (under triple-blind conditions), subjects focused their positive and negative thoughts (‘mental intentionality’) toward three randomly formed groups of cooked rice samples (positive intentionality, negative intentionality, and a control group).  After 30 days, pictures were taken of the nine rice samples (three groups, each group was conducted in triplicate), which were then judged for visual aesthetic value.  Findings show aesthetic ratings of ‘positive’ rice samples to be significantly higher than those for ‘negative’ and ‘control’ ones (p ≤ 0.05), with no significant difference between negative and control sample ratings (p ≥ 0.05).  A further test entailed a 7-day study measuring an Escherichia coli strain (a type of coliform that is closely associated with food safety, whose presence often indicates food poisoning and spoilage) in vitro under the same conditions of stimuli as the rice samples.  Results show positive intention to be associated with lower E. coli division rate when compared with the “control” and “negative intention” groups, thereby further supporting the hypothesis, as well as suggesting an emerging inference, that intentionality might be associated with microbial growth and visual aesthetic ratings.

We're told that the negative thoughts included reprimands, which brings up the question of how you could effectively reprimand rice.  "No no!  Bad rice!" doesn't seem particularly appropriate, given that it's the sort of thing you say to dogs when they do something they're not supposed to, such as swiping an entire wedge of expensive brie from the kitchen counter, and eating the whole thing including the plastic wrapper.  (Yes, that's the voice of experience, right there.)  But with rice, I'm not sure how this would work.  What exactly did you expect the rice to be doing?  More specifically, what was it doing that deserved a reprimand?  I've observed cooked rice carefully, and mostly what it does is sit there.  Almost anything else it might do would be a significant shock, and the first thing I'd think of doing is yelling "What the fuck?" and jumping up out of my chair, not saying "Bad rice!" in a disapproving tone.

Anyhow, the results seem to me to be pretty nebulous.  The aesthetic score ranges from zero to four, and the positive-thought rice had an average score of 1.5 ± 0.3, the negative-thought rice 1.0 ± 0.2, and the control rice 0.9 ± 0.2.  So not only were the scores pretty broad-brush (0-4 seems like a kind of coarse-grained scale), they were all relatively close, especially the negative and the control groups.  The E. coli measurements are equally suspect; here the positive and negative groups were fairly close together, and the control group significantly lower than either one.  (If you want to see the graphed data, I direct you to the paper I have linked above.)

So it seems to me that if either experiment suggests anything, it's that rice doesn't like people staring at it meaningfully, regardless of what they're thinking.

Another red flag in this paper is their referencing the completely discredited "research" by Masaru Emoto, a Japanese scientist who made the claim that if you think negative thoughts at water while it's freezing, it forms ugly crystals.  No, I'm not making this up either, and despite the fact that it has never been successfully replicated, it continues to resurface every time someone claims to have discovered the Magical Quantum Frequency of Love.

Like Emoto's Happy Ice experiment, I'm not buying the Nice Rice results until they are replicated, under controlled conditions, by scientists who don't have a dog in the race.  Note that I'm not accusing Lai et al. of falsifying results, I'm just suspicious enough about their methodology -- not to mention the complete lack of a mechanism by which any of this could work -- that until someone can duplicate their results and show a statistically significant difference in a variable that is rigorously quantifiable, I'm in the dubious column.

So if you're mad at your bowl of rice, my feeling is you should not hesitate to berate it mercilessly.  It will not become bacteria-laden and unattractive thereby.  On the other hand, if you are someone who gets angry at your food, you might want to seek out a good counselor who can help you to focus your ire on more deserving targets, such as people who make specious claims, and the irresponsible media outlets that disseminates them.