I try not to write in Skeptophilia about topics I don't fully understand -- well, at least understand as fully as my brainpower and the available information allow.  But today I'm going to tell you about a recent paper in theoretical physics that blew my mind so completely that I had to write a post about it, even though saying "I don't completely comprehend this" is a serious understatement.

So here goes.  Just don't ask me to clarify further, because the most you'll get is the Canine Head-Tilt of Puzzlement. 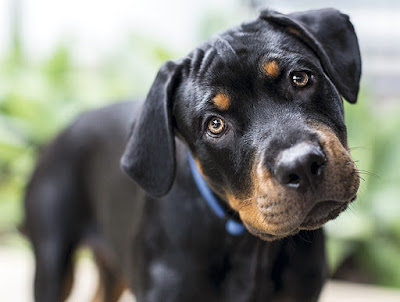 The paper, which appeared last week in Nature Communications, is entitled "Bell's Theorem for Temporal Order," and was written by Magdalena Zych and Fabio Costa (of the University of Queensland), Igor Pikovski (of Harvard University), and Časlav Brukner (of the University of Vienna).  The issue the four physicists were looking at was the seeming paradox of the different way that time (specifically, temporal order) fits into general relativity and quantum theory.  In relativity, the flow of time depends on your relative speed and the distribution of mass near you; in general, the faster you're going, or the nearer you are to a massive object, the slower your clock runs.  Because reference frame is relative (thus the name of the entire theory), you don't notice this effect yourself -- to you, your clock runs just fine.  But to someone observing you at a distance, the flow of time in your frame of reference has become more sluggish.

Weird enough, but that's only the beginning.  To take the most familiar example, consider two astronauts in spacecraft zooming away from each other at a substantial fraction of the speed of light.  To astronaut A, his clock is running fine, and astronaut B's clock is slow (because he's moving away from A at a high speed).  But from B's perspective, it's A that's moving; so B thinks his own clock is accurate, and A's is the one that's running slow.

And it's not that one's right and the other is somehow being fooled.  Both of them are right -- because time is relative to your speed.

As an outcome of this (and germane to the paper I referenced), what this also means is that A and B can differ in what they perceive as the time order of two events.  Occurrences that appear simultaneous to one of the astronauts might appear sequential to the other.

With me so far?  Well, the problem that Zych et al. were investigating was that in quantum theory, there's no allowance for relativistic ordering of events.  Time's arrow is one-directional, and if event X followed Y in one reference frame, it would do so on all reference frames.

Well, that's what the physicists thought -- until this paper showed a theoretical framework that suggests otherwise.

Zych et al. proposed a thought experiment involving two spaceships, one of which is near a massive object (which, as I mentioned, warps spacetime in such a way as to slow down the passage of time).  They're engaged in a war game that requires them to fire their phasers simultaneously and immediately afterward start their engine so as to dodge the blast.  The problem is, the ship near the massive object will have a slower clock, and will not be able to fire quickly enough to escape being blasted by the other ship.

So far, weird but not that hard to understand.  What Zych et al. did was to ask a single question: what if the two ships were in a state of quantum superposition before they fired?

Superposition is one of the weirdest outcomes of quantum physics, but it's been demonstrated experimentally so many times that we have no choice but to accept that this is how the universe works.  The idea is that if a physical system could exist in two or more possible states, its actual state is an array of possibilities all existing at the same time until some measurement destroys the superposition and drops the system into one of the possible outcomes ("collapsing the wave function").  The most famous iteration of this is Schrödinger's Cat, who is both alive and dead until the box is opened. 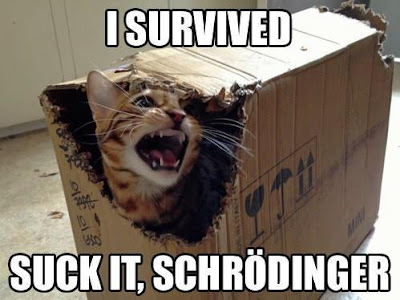 In the case of the ships, the superposition results in quantum entanglement, where the entire system acts as a single entity (in a causal sense).  Here's how the result is described in a press release from the University of Vienna:


If a powerful agent could place a sufficiently massive object, say a planet, closer to one ship it would slow down its counting of time.  As a result, the ship farther away from the mass will fire too early for the first one to escape.

The laws of quantum physics and gravity predict that by manipulating a quantum superposition state of the planet, the ships can end up in a superposition of either of them being destroyed...  The new work shows that the temporal order among events can exhibit superposition and entanglement – genuinely quantum features of particular importance for testing quantum theory against alternatives.

So each of the ships is in a state of both being destroyed and not being destroyed, from the standpoint of an outside observer -- until a measurement is made, which forces the system into one or the other outcome.

Note what this isn't saying; it's not implying that one of the ships was destroyed, and we simply don't know which yet.  It's implying that both ships are in an entangled state of being blasted to smithereens and not.

At the same time.


This entanglement enables accomplishing a task, violation of a Bell inequality, that is impossible under local classical temporal order; it means that temporal order cannot be described by any pre-defined local variables.  A classical notion of a causal structure is therefore untenable in any framework compatible with the basic principles of quantum mechanics and classical general relativity.

All of which leaves me sympathizing a great deal with Winnie-the Pooh.

So there you have it.  It turns out that the universe is a weird, weird place, where our common-sensical notions of how things work are often simply wrong.  Even though I'm far from an expert -- I run into the wall pretty fast when I try to read actual papers in physics, or (for that matter) in most scientific fields -- I find it fascinating to get a glimpse of the actual workings of the cosmos.

Even if it blows my tiny little mind.