Here I was, thinking that the stupidest thing I'd hear all day was that windmills cause cancer and that the way to stop hurricanes is to detonate a nuclear bomb in the middle of one, when along comes my friend A. J. Aalto, the amazingly talented author of the Marnie Baranuik series, and asks me if I've ever heard of Planet 7x.

Well, I'd heard of the actual seventh planet (better known as Uranus) and I'd heard of Planet X, but Planet 7x was a new one on me.  A friend, she said, had told her all about it, and when I say "all" I mean it, because apparently it came in the form of a five-hour monologue while A. J. was trapped in a car with him.   "Planet 7X... is the reason for all bad things on earth," A. J. explained to me.  "He tried to explain the 'science' proving it, which hurt my head, but I was in no position to show him where he was going wrong.  I googled it just now—wow, a goldmine of woo.   Pure woo."

So naturally I had to follow suit.  And after a couple of hours of research, I think I'd amend "wow" to "what the actual fuck?"  Because this is a synthesis of about two dozen different realms of craziness, including apocalyptic prophecy, conspiracy theories, biblical literalism, Atlantis, gravity denialism (no, I'm not making that up), and various wackiness about supervolcanoes, asteroid impacts, the shift of the magnetic poles, the destruction of Sodom and Gomorrah, the Mayans, the Black Death, Alexander the Great, invisibility cloaks, Ronald Reagan, and the Ice Age.

Oh, but he states outright that he doesn't believe in the Flat Earth.  That would be ridiculous.

Apparently this whole thing is the brainchild of one Gil Broussard, and this is where the whole thing gets an added frisson of weird coincidence, because Broussard hails from my home town of Lafayette, Louisiana.  Not only that, apparently Broussard got the idea for Planet 7x from two University of Louisiana physicists, Dr. John Matese and Dr. Daniel Whitmire.

So it's even weirder, because I majored in physics at the University of Louisiana, and I've taken classes with both of these guys.  I took Quantum Mechanics with Dr. Matese (whose name Broussard misspells "Matisse," which I guess is understandable enough), and Astronomy with Dr. Whitmire.  And what's even weirder is that I went "aha" when I saw their names -- because I knew why they'd inspired Broussard's kooky idea.

When I was an undergraduate, Matese and Whitmire were working on a (legitimate) theory that went by the unfortunate name of "Planet X," and in fact I heard them give a talk on it.  Their idea, which was persuasive enough to merit a paper in Nature in 1985, was that there is a large planet outside of the orbit of Pluto that periodically passes through dense parts of the Oort Cloud, thus gravitationally perturbing the orbits of comets and sending them hurtling inward toward the Sun.  This created regular spikes in cometary impacts on Earth, and were the source of mass extinctions.

Their theory hasn't stood the test of time especially well, and there's been no subsequent hard evidence that their Planet X even exists.  Furthermore, we have pretty good models for the causes of mass extinctions, largely triggered by supervolcano eruptions (e.g. the Deccan Traps and Siberian Traps) and collision by asteroids (not comets), such as the one that left the Chicxulub Crater in the Gulf of Mexico.

But what Gil Broussard has done is take Matese's and Whitmire's theory and twist it out of all recognition.  Planet 7x (I don't know where the "7" comes from; it probably says somewhere on the website, but honestly, I only got through about half of it before pooping out) is in a highly elliptical orbit, and when it comes in toward its perihelion, it does things like send "plasma discharges" toward the Earth (I have no clue why), which not only causes craters and mass extinctions, but makes the magnetic poles flip.  This is all documented in the Bible, apparently, and explains such events as: the parting of the Red Sea (why a huge planet swooping by affected only the water in one location, I have no idea); the account of the battle against the Amorites where Joshua asked for an extra long day to finish Smiting the Enemy so God made the Sun "stand still over Gibeon" until the battle was over; Sodom and Gomorrah being obliterated, and Lot's wife being turned into a pillar of salt; the Tower of Babel "confusion of languages" incident; all the awful shit that happened to poor Job; and the eclipse that supposedly happened when Jesus died.

Oh, and I forgot to tell you -- the next time Planet 7x is scheduled to visit in 2021, and that's going to usher in the End Times as per the Book of Revelation, so that gives us something to look forward to.  How a large planet could generate the Seas Turning to Blood and Apocalyptic Horsepersons and Dragons With Seven Heads and Ten Crowns, I have no idea, but apparently it can.

Which brings up a question I've always had; why would a dragon have seven heads but ten crowns?  By my math that means it has three crowns left over.  What would it do with those?  Put them on heads that already had crowns?  That image is appallingly asymmetrical.  Stack them on its tail?  Carry them in a dragon-sized backpack?  Maybe it doesn't wear all its crowns at once, and swaps out the spares when one of the crowns is at the cleaners, or something.  I dunno.

Anyhow, I encourage you to visit Broussard's website and read about it for yourself, because I can't possibly explain it fully enough for you to get the whole picture.  There are also excellent illustrations, including one of the Earth being zapped by a bolt of lightning from a very evil and threatening-looking orange planet, in the fashion of the Emperor trying to fry Luke Skywalker at the end of Return of the Jedi. 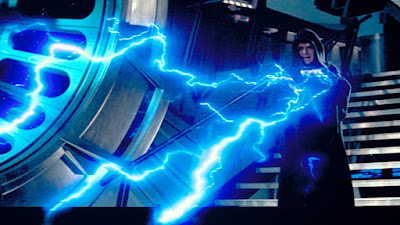 So thanks to A. J. for sending me the idea, especially given that it originates with a Hometown Boy and references two people I actually know.  I'm going to need a double scotch to recover from the brain trauma of wading through the site, but that's not A. J.'s fault.

I mean, I think it wasn't A. J.'s fault.  Considering some of the stuff she writes, this could well be a diabolical plot to short-circuit important parts of my brain.  *gives A. J. a suspicious side-eye*  Maybe it's all part of a conspiracy against me.

Or maybe it's just the influence of Planet 7x approaching.  Who the hell knows.

Posted by Gordon Bonnet at 4:42 AM