Scanning the skies for life

It will come as no surprise to regular readers of Skeptophilia that one of my dearest wishes is to live long enough to see incontrovertible proof of life on another planet.

Intelligent life would just be the icing on the cake, but I'm not counting on it, especially given how rare it is down here on Earth.  And the best of all -- having the intelligent life come here so I could have a talk with it -- is so unlikely as to be impossible, given the enormous (shall we say astronomical) distances involved.

But that doesn't mean we can't find out more about the conditions that could generate life and the likelihood of it being found elsewhere, as three pieces of research last week showed.

The first, which appeared in the journal Science Advances, is called "The Origin of RNA Precursors on Exoplanets," by a team of Cambridge University astrophysicists, Paul B. Rimmer, Jianfeng Xu, Samantha J. Thompson, Ed Gillen, John D. Sutherland, and Didier Queloz.  In it, we find out that the conditions for forming RNA nucleotides -- the fundamental building blocks of RNA, one of the two carriers of genetic information (and generally thought to be the one that formed first) -- have been narrowed down to a specific range of temperatures and luminance.  The authors write:


Given that the macromolecular building blocks of life were likely produced photochemically in the presence of ultraviolet (UV) light, we identify some general constraints on which stars produce sufficient UV for this photochemistry.  We estimate how much light is needed for the UV photochemistry by experimentally measuring the rate constant for the UV chemistry (“light chemistry”, needed for prebiotic synthesis) versus the rate constants for the biomolecular reactions that happen in the absence of the UV light (“dark chemistry”).  We make these measurements for representative photochemical reactions involving and HS−.  By balancing the rates for the light and dark chemistry, we delineate the “abiogenesis zones” around stars of different stellar types based on whether their UV fluxes are sufficient for building up this macromolecular prebiotic inventory.  We find that the light chemistry is rapid enough to build up the prebiotic inventory for stars hotter than K5 (4400 K).  We show how the abiogenesis zone overlaps with the liquid water habitable zone.  Stars cooler than K5 may also drive the formation of these building blocks if they are very active.

The good news, for exobiology aficionados like myself, is that this not only homes in on what conditions are likely to produce life -- telling us where to look -- they're conditions that are relatively common in the universe.  Which further bolsters something I've said for ages, which is that life will turn out to be plentiful out there. 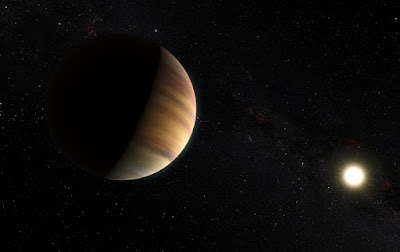 [Image licensed under the Creative Commons ESO/M. Kornmesser/Nick Risinger (skysurvey.org), Artist impression of the exoplanet 51 Pegasi b, CC BY 4.0]

The second, which appeared in Monthly Notices of the Royal Astronomical Society, suggests one way to detect that life at a distance.  In "Biological Fluorescence Induced by Stellar UV Flares, a New Temporal Biosignature," by Jack T. O'Malley-James and Lisa Kaltenegger (both of Cornell University), we find out that class-M stars -- of which the Sun is one -- not only have the right temperature ranges to foster planets with life, but their habit of generating solar flares could tip us off as to which planets hosted life.  The phenomenon of biofluourescence -- the absorption of high-energy light (such as ultraviolet) and its conversion into lower-energy light (visible light) -- could act as a protective mechanism during solar flares.  So when a star flares up, all we have to do is look for the flash of fluorescence that follows.

"On Earth, there are some undersea coral that use biofluorescence to render the Sun’s harmful ultraviolet radiation into harmless visible wavelengths, creating a beautiful radiance," said study co-author Lisa Kaltenegger, who is the director of the Carl Sagan Institute for Astrophysics.  "Maybe such life forms can exist on other worlds too, leaving us a telltale sign to spot them."

The coolest thing is that one of the stars being studied is Proxima Centauri -- the closest star to our Solar System.  So the technique O'Malley-James and Kaltenegger propose using could find life that is, so to speak, right next door.

As a cool followup to this paper, the following day a paper appeared in arXiv by a team of astrophysicists led by Stefan Dreizler of the Georg-August-Universität Göttingen that found not one but three planets in the "Goldilocks zone" of a relatively nearby star -- GJ1061.  One of the problems with figuring out which planets to study for signs of life is that the mass of the planet and its distance from the star aren't the only factors that matter; another, and one much harder to determine from Earth, is the stability of the orbit.  I still remember when I was a kid watching the generally-abysmal 1960s science fiction show Lost in Space, and was blown away when it was revealed that the planet the Robinson family was on was in a highly elliptical orbit -- so the seasons varied from blisteringly hot at the planet's perigee and freezing cold at its apogee.  (The way it played out in the show was, predictably, kind of silly, but it was a concept I'd never run into before, and at age six I was pretty damned impressed.)

But what Dreizler et al. found was that the three planets around GJ1061 were in stable orbits, meaning it was likely that they were relatively circular.  (Elliptical orbits cross each other and therefore increase the likelihood of collisions or gravitational slingshots slinging a planet into the star or out into space.)

So this gives us another likely candidate for biosignatures.

I'm pretty encouraged at all the effort that's being expended in this endeavor.  I vividly recall watching my favorite movie -- Contact -- for the first time, and being appalled at how astronomer Ellie Arroway had to fight to be taken seriously, not only because she was a woman in what then (and still is to some extent now) was a man's world, but because her area of research was the search for extraterrestrial life.  What more fascinating research is there, to find out if life on Earth is unique -- or if, as I contend, we're just one of a multitude of planets hosting life?

I can't imagine a more deeply resonant idea, nor one that would have as profound an effect on how we see ourselves and our place in the universe.  And if that's not worth researching, I don't know what is.