The most haunted spot in Arkansas

I'm back from the annual Oghma Creative Media writers' retreat, after ten days of schmoozing with other authors and enjoying the lovely hills and valleys of the Ozark Mountains in northwestern Arkansas.  During my stay there, the CEO of Oghma (and my dear friend) Casey Cowan took me around to some of the local attractions, and because of my interest in all things paranormal one of these was the Crescent Hotel in Eureka Springs.  [Note: all photographs taken by me except as noted.] 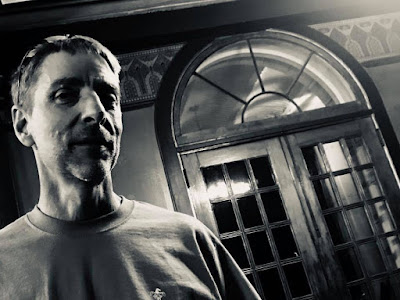 Eureka Springs is a charming little town, with steep, narrow, twisty streets, beautifully-maintained old houses, and flower-filled gardens.  The crown jewel, though, is the Crescent, which sits on a high point overlooking the deep forested valleys north of the town.  It was built in the 1880s for the then-astronomical cost of $294,000, and it became renowned for its opulence and grandeur. 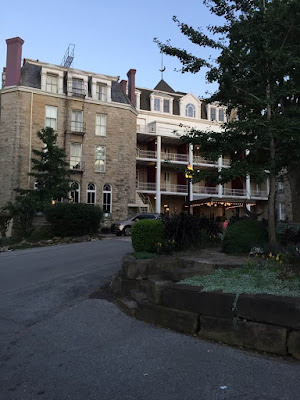 The hotel, however, fell upon hard times once visitors realized that the "healing waters" that put Eureka Springs on the map in the first place were actually just plain water, and in 1908 the Crescent became the Crescent College and Conservatory for Young Women.  Even the college didn't do well, however, especially after a series of tragedies (one of which is the subject of the haunting novel by J. C. Crumpton, Silence in the Garden) that culminated in the building's abandonment in 1934. 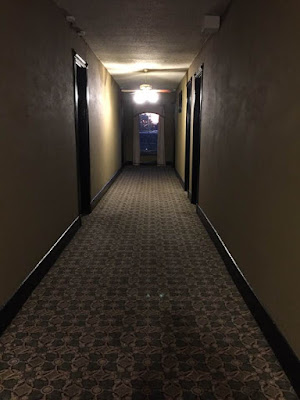 One of the hallways on the second floor.  Is it just me, or are there two spots on the floor that look like eyes?

In 1937 it was purchased by one Norman Baker, who revitalized the claim of the alleged healing properties of the water in the area, and in the process defrauded cancer patients of an estimated four million dollars -- which led to his being sent to Leavenworth Prison, and the Crescent was again abandoned. 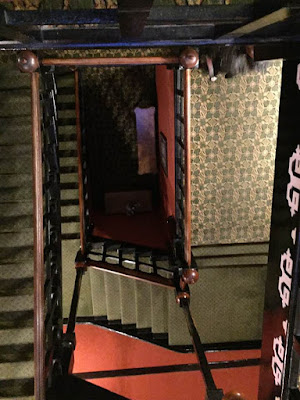 Looking down the staircase from the fourth floor.  Kind of Escherian, isn't it?

Repeated (failed) attempts to renovate the place were foiled by running out of funds and (worst of all) a massive fire in 1957, but in 1997 the building was purchased by a couple named Marty and Elise Roenigk, who promised to restore the Crescent to its original grandeur.  And they have.  It's an impressive place, and when you're there you feel like you've stepped back in time a hundred years or more. 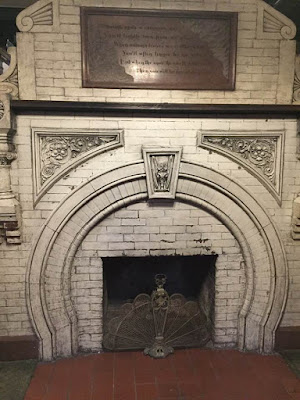 The central fireplace on the first floor

Of course, my primary interest was not the admittedly beautiful furnishings and architecture, but the Crescent's reputation for being haunted.  It has quite a retinue of ghosts -- an Irish stonemason who supposedly died in a fall from the building's roof while it was being constructed, a nurse from its days as a fraudulent cancer hospital, and a girl who committed suicide during the 1920s (the latter is the subject of Crumpton's novel).  In addition, there are various apparitions seen on the third floor, which was the location of "Doctor" Baker's morgue and autopsy room.  The hotel's phone system was handled for a time using the original antique switchboard, but that was discontinued when the switchboard operators reported getting calls from the basement -- which at the time was completely empty. 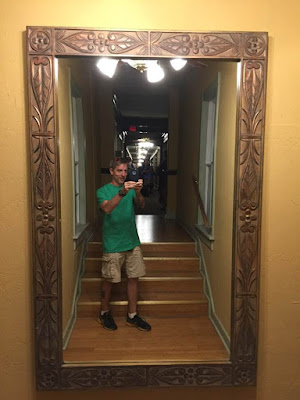 A staircase where people report seeing the ghost of a little girl.  [Note: the figure looming behind me in the reflection is not a ghost, but my friend Casey.  So no luck there.]

Then there's the Victorian gentleman who is often seen in the bar, sitting quietly in a tophat and formal dress, who doesn't answer if you address him; the dignified lady reported from room 419 who will introduce herself as "Theodora, a cancer patient," if you ask her, but then vanish immediately afterward; a small boy who haunts the kitchen; and the appearance of dozens of ghostly dancers in the ballroom who disappear as soon as you turn on the lights.

Sad to say, I didn't see any of 'em.  We did, however, pass two women in 1920s garb sitting on a bench, and after I passed them I whispered to Casey, "You did see those women, right?"  He assured me he had, and explained that they were leading a tour for the hotel, thus missing a valuable opportunity to scare the absolute shit out of me.

On the other hand, Casey's wife Amy, and our friend Venessa Cerasale (who is also Oghma's ultra-competent Chief Operations Officer), both report having had creepy experiences in the Crescent, and both of them are about as level-headed and pragmatic as you could hope for.  So I don't know if it was my aura of disbelief that kept the spirits at bay, or if they were just taking a break for the evening.

I do want to go back, however, and maybe even spend a night or two there.  For one thing, Eureka Springs is a cool town and deserves way more exploration than we had time for.  Plus, I don't think an hour of wandering the grounds is really offering the ghosts their best shot at me.  So I'm sure I'll be back for another visit to "the most haunted spot in Arkansas" -- and maybe have more success in rousing the Crescent's deceased residents next time.