There's a common comment from climate change deniers that I'm sick unto death of, and it usually takes the form of something like "the Earth's climate has had ups and downs in the past, and life has gone along just fine."

First, it's the pure ignorance of this attitude that gets me.  If you did ten minutes' worth of research online, you'd find that a number of these "ups and downs" coincided with mass extinctions.  Life survived, yes, but dramatic losses in biodiversity and overall population numbers hardly constitutes "getting along just fine."  (In fact, the largest mass extinction ever -- the Permian-Triassic Extinction, which wiped out an estimated 96% of marine species and 65% of terrestrial species -- was coincident with a huge spike in temperature and atmospheric carbon dioxide, thought to have been triggered by a colossal volcanic eruption.)

But second, and honestly worse, is the blithe attitude that we can continue doing whatever we want to the environment and face no consequences whatsoever.  This raises entitlement to the level of an art form; apparently, we humans occupy such an exalted niche that no matter what we do, the rest of nature is magically going to make sure we not only survive, but thrive.

Even the most diehard deniers, however, are getting some serious hints that their determination to ignore science is not working out so well.  First of all, we have the fires in the Amazon, which have reached unprecedented levels in Brazil, with 74,000 acres burned to the ground already.  The cause is twofold -- the natural dry season, and the incomprehensible policy by Brazilian president Jair Bolsonaro of recommending large-scale slash-and-burn to "encourage agriculture."  The problem is larger in scale than just South America, however.  Environmental scientist Jonathan Foley explained why in an interview with Science News:


Some computer models... show a hypothetical scenario that when we clear rainforest, it starts to almost immediately warm up and dry out the atmosphere nearby.  When we stand in a forest, it feels cool and moist.  But when you clear-cut large areas of the forest, the air right around you gets hotter and drier, and it affects even rainfall patterns.  The worry is if you start clear-cutting more of the Amazon, in theory, a tipping point could be reached where the rest of the forest dries out, too.

If that happens, the idea is that the Amazon could flip suddenly from being a rainforest to being a dry savanna-like ecosystem.  We’re not absolutely certain about it, but even that theoretical possibility is kind of terrifying...  Globally, about 10 to 15 percent of our CO2 emissions comes from deforestation.  If this is going back up again in Brazil, that’s going to make climate change even worse.

The only amendment that needs to be made to Foley's statement is his use of the word "if" in the last sentence. 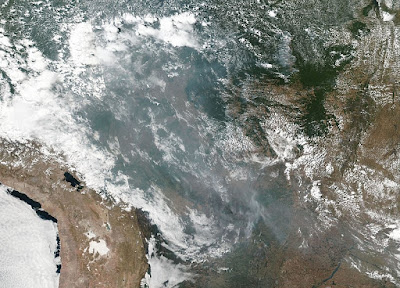 Smoke from the 2019 Amazonian wildfires [Image is in the Public Domain, courtesy of NASA]

The other piece of alarming information this week comes from some research done at Stockholm University that firmed up a link between the salinity of the North Atlantic and climate throughout the world.  The team, made up of David K. Hutchinson, Helen K. Coxall, Matt OʹRegan, Johan Nilsson, Rodrigo Caballero, and Agatha M. de Boer, were studying the Eocene-Oligocene Transition (EOT), which occurred 34 million years ago and involved a shift from a "hothouse" to "icehouse" climate.

The Eocene–Oligocene transition (EOT), ~34 Ma ago, marked a major shift in global climate towards colder and drier conditions and the formation of the first Antarctic ice sheets.  A gradual decrease in CO2 is thought to be the primary driver of the transition, causing long-term cooling and increasing seasonality through the Eocene, culminating in the glaciation of Antarctica.  Deep water circulation proxies suggest that the EOT, including the preceding 1 Myr, also marked either the onset or strengthening of an Atlantic meridional overturning circulation (AMOC).

Catch that?  An event occurring the North Atlantic is the probable trigger for the formation of the Antarctic Ice Sheet, and a radical change in Earth's climate -- and, unsurprisingly, a massive extinction that wiped out 20% of the Earth's species (large mammals were the hardest hit).

What Hutchinson and his team showed is that the likely cause of this transition was the closing of a oceanic channel between the Arctic Ocean and the North Atlantic.  The Arctic Ocean at that time had very low salinity (something the team demonstrated using the species of algae that show up in the fossil record from that time and place).  As long as the channel was open, fresh water flooded into the North Atlantic, keeping the salinity of the surface water low.  When the channel closed due to tectonic movement, the salinity of the surface of the North Atlantic spiked.  Saline water is more dense than fresh water, so this surface water began to sink, kicking off the "North Atlantic Thermohaline Circulation" and (more germane to our discussion here) drawing down dissolved carbon dioxide by the metric ton.

The result: a drastic drop in temperature, Antarctica becoming an ice-covered wasteland, and a mass extinction worldwide.

How anyone can read this and not be freaking out over the spike in carbon dioxide we've seen in the last hundred years -- that appears to be the fastest carbon dioxide concentration change anywhere in the geological record -- is beyond me.  There's no doubt that there's a tipping point, as the Eocene-Oligocene Transition shows.  The only question is where that tipping point is -- and whether we've already passed it.

What's driving it all is money.  Altering our lifestyle, protecting the rain forests, and divesting ourselves from fossil fuels all require that we make sacrifices ourselves, but more importantly, that we end the chokehold the fossil fuels industry has on our elected officials.  Of course the politicians don't want anyone to understand and accept climate science, because that would mean cutting off one of their biggest sources of donations -- the petrochemical industry.

It is fitting to end with a quote from Upton Sinclair: "It is difficult to get a man to understand something, when his salary depends upon his not understanding it."  The problem is, here what we're jeopardizing is not simply someone's salary, but the long-term habitability of the Earth.