A rain of dust

One of the problems with the modern industrialized worldview -- and yes, I know this is an overgeneralization, but still -- is our tendency to think we're capable of controlling everything.

I'm not so much talking about simple day-to-day occurrences.  At least on a theoretical level, we're all aware we could get clobbered by a truck while crossing the road.  But the bigger stuff all seems so solid, so unshakeable, that it's hard to imagine it ever changing.  Of course the grocery stores will always have food, there'll always be electricity available when we plug in our toasters, water will flow when we turn on the faucet.  On an even bigger scale -- it'll be warm in the summer and cool in the winter, the crops will grow, the rain will fall.

You don't have to know much science -- or history, for that matter -- to realize how false this attitude is.  Even small perturbations to the global ecosystem can have drastic consequences.  (Just as a handful of examples -- the 1984-1985 drought in Ethiopia that left 1.2 million dead and 400,000 refugees; the drought in the Yucatán in the early 10th century C.E. that is thought to have caused the downfall of the Mayan Empire; and the American Dust Bowl of the 1930s. brought on by drought and lousy farming practices.)

The fact is -- and it's a point I've made before -- we need to be extraordinarily careful in pushing at the global ecosystem, because it can respond catastrophically to purely natural circumstances.  Adding global-scale human foolishness into the equation is a recipe for disaster.

As an example of how distant events can have unexpected global consequences, take the study published last week in Science Advances suggesting that a collision between two asteroids half a billion kilometers away triggered a drastic plunge in temperatures and the initiation of an ice age.  The event, which took place in the mid-Ordovician Period (466 million years ago), involved the destruction of an asteroid on the order of 150 kilometers in diameter, creating a dust plume that rained down upon the Earth.  The dust and debris blocking the sunlight triggered a drop in global temperatures and a sudden (geologically speaking) turnaround in the climate that spread ice sheets over much of the high latitudes in both hemispheres.

Of course, cosmic dust is falling into the Earth's atmosphere all the time, but this event caused a massive spike in the amount.  "Normally, Earth gains about 40,000 tons of extraterrestrial material every year," said study co-author Philipp Heck of the University of Chicago in an interview with Astronomy.  "Imagine multiplying that by a factor of 1,000 or 10,000." 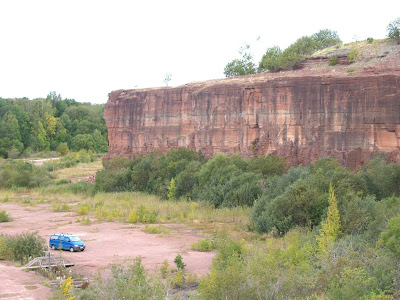 The outcrop in Sweden that the researchers studied.  The layer containing the debris from the collision is visible as a gray line about 2/3 of the way up the cliff face.  [Image courtesy of Philipp Heck and the Field Museum]

The result of the cool-down was a huge increase in biodiversity as life forms evolved to cope with the change.  But before you start in on the "life finds a way" line of thought, and that this'll save us from the consequences of anthropogenic climate change, allow me to point out that the massive Ordovician chill was slower than today's warm-up by orders of magnitude.  "In the global cooling we studied, we're talking about timescales of millions of years," said Heck. "It's very different from the climate change caused by the meteorite 65 million years ago that killed the dinosaurs, and it's different from the global warming today — this global cooling was a gentle nudge.  There was less stress."

So yeah.  Having a thousand times the amount of dust flung at us from the explosion of an asteroid 150 kilometers across is still not as drastic as what we're currently doing to the climate.

Oh, and in a rather horrid coincidence, that quantity of debris is roughly equal to the amount of plastic we produced in 2015, 79% of which was landfilled.

So the idea that somehow the Earth is obligated to remain hospitable to human life regardless what we do to it -- or what happens outside of our sphere of control -- would be ludicrous if it weren't so terrifying.  It's why ham-handed efforts to "own the libs" by nitwits like Laura Ingraham (who tried to be funny by "attempting to drink a light-bulb stuffed steak using plastic straws") fall flat if you know anything at all about science.

Go ahead, Laura, laugh it up.  You better hope that we "libs" are overestimating the danger posed by the pro-industry, pro-fossil-fuels, damn-the-ecology-full-speed-ahead policies favored by people of your stripe.  And don't even start with me about how environmentally-conscious people are "hoping for disaster" or "trying to destroy the economy."  Fearing that something is likely to happen isn't the same as hoping it will happen, which should be clear to anyone who has an IQ larger than their shoe size and concern for anything other than short-term financial gain.

So once again, we have a piece of research about a distant event millions of years ago providing a cautionary tale about what's happening here and now.  I wish I had some kind of positive note to end this on, but increasingly, it's looking like our current behavior is likely to throw us past a tipping point -- and our long-term legacy might be appearing to some scientist in the distant future as a gray stripe in a rock outcrop.