While I first ran into the idea of life on other worlds when I was a kid watching shows like Lost in Space and Star Trek, it wasn't until I was in college and read Arthur C. Clarke's followup to his novel 2001: A Space Odyssey, called 2010: Odyssey Two, that I first considered life around moons in our own Solar System.

The upshot of the book is that there is a developing intelligent species on Europa, one of the so-called "Galilean" moons of Jupiter.  It's not such a far-fetched idea; Europa has a water-ice crust and might well have liquid water underneath it, so it's entirely possible there's some life form or another living down there.  (In the book, there was, and the super-intelligent civilization that sent the famous monolith to Earth in the previous book starts broadcasting the message, "All these worlds are yours -- except Europa.  Attempt no landings there" in an attempt to keep humans from dropping in and fucking things up, which you have to admit we have a tendency to do.)

Europa is only one candidate for hosting life, however.  An even better bet is Titan, the largest moon of Saturn and the second largest (after Jupiter's moon Ganymede) moon in the Solar System.  It's larger than the planet Mercury, although less than half as massive, and its surface seems to be mostly composed of water and ammonia -- although in 2004 the Cassini-Huygens probe found liquid hydrocarbon geysers at its poles, which is certainly suggestive of some fancy organic chemistry going on underneath the surface. 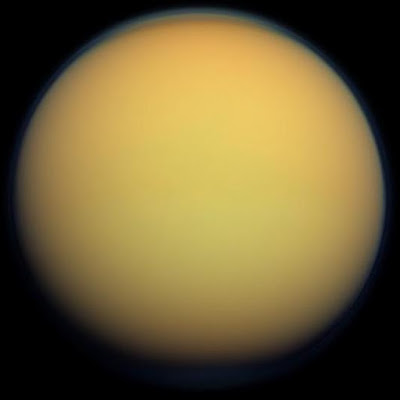 A photograph of Titan taken by Cassini-Huygens.  Its featurelessness is because we're seeing the tops of the clouds -- thought to be, basically, photochemical smog.  [Image is in the Public Domain, courtesy of NASA/JPL]

In any case, it's a place ripe for some serious exploration.  And it's certainly looking better than even the nearest stars; our fastest spacecraft, Deep Space 1, would take about 81,000 years to reach the nearest star, Proxima Centauri, which is a little long to wait for results.  So I was thrilled to find out that NASA is talking about a mission to Titan -- that involves packs of "shapeshifting" robot drones.

One limitation of any probe we've sent out is that even if it's working optimally, it still can only survey a minuscule percentage of the target's surface.  What the planned Shapeshifter mission does is to send a spacecraft out there that's composed of hundreds (or more) smaller, self-propelled, robotic spacecrafts that can then roam around exploring the surface or dive down and puncture the crust and see what's down in the oceans that we believe exist below it.

"We have very limited information about the composition of the surface," said team leader Ali Agha, of NASA's Jet Propulsion Laboratory.  "Rocky terrain, methane lakes, cryovolcanoes – we potentially have all of these, but we don't know for certain.  So we thought about how to create a system that is versatile and capable of traversing different types of terrain but also compact enough to launch on a rocket."

The difficulty -- well, one of the many difficulties -- is whether we'll recognize life on Titan if we find it.  Besides an atmosphere that seems to be mostly made of ammonia and methane, Titan has an average surface temperature of around -180 C, which is a little chilly.  So any living thing there would have to be adapted to seriously different conditions than anything we've found on Earth.  There's no reason to believe that it would share characteristics with any terrestrial life form besides the most basic requirements for life -- reproduction, metabolism, and some kind of inheritable genetic code -- so we'll have to be pretty willing to expand our definition of "living thing" or we'll likely miss it entirely.  (Remember the Horta from the famous original Star Trek episode "The Devil in the Dark?"  It was a silicon-based life form that used hydrofluoric acid instead of water as its principal circulatory solvent -- and also as a defense mechanism, as various red-shirted unfortunates found out. The intrepid crew of the Enterprise at first thought the Horta was some bizarre geological formation -- which, of course, it sort of was.)

In any case, I hope Agha's project gets off the ground, both figuratively and literally.  If we can't develop faster-than-light travel, and unfortunately Einstein's ultimate universal speed limit seems to be strictly enforced in most jurisdictions, investigating other star systems is kind of impractical.  So we probably should focus on what's going on here at home -- and hope we're not told, "Attempt no landings on Titan."

Although if we were, that would be eye-opening in an entirely different way.

Posted by Gordon Bonnet at 3:19 AM