Yesterday a friend and loyal reader of Skeptophilia brought to my attention a claim I hadn't run into before: that actor Morgan Freeman is actually the same person as musician Jimi Hendrix.

My first thought was, "Wait a moment.  Jimi Hendrix is dead and Morgan Freeman isn't," which you'd think would kind of preclude them from being the same person.  But what the writer of the article, Sean Adl-Tabatabai, is saying is that Jimi Hendrix faked his death, then reinvented himself as Morgan Freeman. 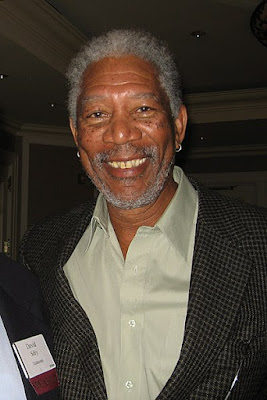 The main evidence of the claim, if I can dignify it with that word, is that there's no record of Freeman before Hendrix's death from a drug overdose in 1970.  Which, as far as I can find out, is patently false; even his Wikipedia page lists plenty of stuff he did before 1970 (at which point Freeman would have been 33 years old), including a lot of easily-verifiable stuff like his winning a state-wide drama competition in Mississippi at age 12, performing in a radio show while in high school, and a four-year stint in the military.

Adl-Tabatabai says all that stuff is made up, and it's been done to protect Freeman from the notoriety he'd get if information about his former life came out.  As far as his own evidence, it mostly seems to consist of his screaming at us that we're idiots if we don't believe him, and anyone who says otherwise lacks critical thinking skills, common sense, and probably a brain as well.

After I read this article, I began to wonder if there were other celebrities about whom this sort of thing has come up, so I did a Google search for, "celebrities identity change conspiracy."  And all I can say is, there are a lot of people out there who are in serious need of a hobby, if not immediate intervention by a mental health professional.

So down the rabbit hole I went.

First we have singer Avril Lavigne, who died in 2003 and was replaced by a body-double named "Melissa."  The evidence here seems to be mostly that around that time Lavigne/Melissa started to dress differently.  Because obviously the only way to make a wardrobe change is to die and have your replacement start wearing different clothes.

Then there's Eminem, who died in 2007 either in a car crash or of a drug overdose, depending on which version you go for, possibly caused by the fact that Eminem turned down an opportunity to join the Illuminati, and then was replaced either by a clone or an android.  Apparently Eminem version 2.0 looks younger than the first one did, and he even slipped up and gave away the game in an interview in 2008 wherein he said, "Right now I'm kinda just concentrating on my own stuff, for right now and just banging out tracks and producing a lot of stuff.  You know, the more I keep producing the better it seems like I get, 'cause I just start knowing stuff."

Get it?  "Knowing stuff?"  What stuff do you know, Slim Shady?  *suspicious eyebrow raise*

And how about J. K. Rowling?  Here the conspiracy theorists went a step further than killing her, as they did with Lavigne and Eminem; they claim she never existed in the first place.  The entire Harry Potter series was written by a team of marketing professionals, because it's not possible for anyone to write that much that quickly.  As far as Rowling herself, she's an actress hired to "give a human face" to what is essentially a multimedia scam.

Well, as far as no one being able to put out books that fast, I'm calling bullshit on that one, because I got my first publishing contract in 2015 and as of right now, I have thirteen books in print.  I'm not sure my word count is up to Rowling's standard -- most of my books are a bit shorter than the Harry Potter novels, especially the last three -- but I know that kind of output is possible because I did it, while (for the record) holding down a full time job.

Or maybe I'm just a robot myself.  I dunno.

The last one I'll mention -- but far from the last one out there -- is that singer Katy Perry is a grown-up Jon-Benét Ramsey.  Ramsey, you probably know, is the tragic six-year-old beauty pageant contestant who was murdered in her own home in 1996, a crime that has never been solved.  The conspiracy theory is that Ramsey's parents staged her death for some unspecified reason, and kept her in hiding until she was eighteen, at which point she re-emerged as Katy Perry with her infamous song "I Kissed a Girl (and I Liked It)."

As far as evidence -- again using the word in its loosest sense -- other than a passing resemblance between the two, there's the line from Perry's memoir (she has a memoir?  who knew?), "Not that I was one of those stage kids.  There was no JonBenét Ramsey inside of me waiting to burst out."  It is kind of an odd thing to say -- there are a lot of child actors she could have mentioned who would have much more positive associations -- but the conspiracy theorists say this was Perry's way of owning up to who she actually was.  "The Illuminati always leave clues in plain sight," said one proponent of this claim.

Righty-o.  Because the Illuminati are just that wily.  "If we put clues out there that your average YouTube geek can find, it'll make everyone believe we can't possibly be this stupid."

At this point, the waters got a little deep, and I kind of gave up.  It illustrates to me a rather unfortunate thing, though -- that no matter how intrinsically ridiculous an idea is, you can get people to believe it if you just append to it the words "conspiracy coverup Illuminati."  But I need to wrap this up, because I need to finish my next novel by my deadline 4.8 seconds from now.  Should be a piece of cake, as I only have seventeen chapters left to write.