I'm guessing that every amateur philosopher has wondered if we all perceive color the same way -- for example, if what I perceive as "red" is the same as what you call "green," but we've just learned to both call it green.

I know I've been asked that probably dozens of times in my neuroscience classes, and my answer was always the same: it's possible, given that I can never see the world through your eyes and brain, but it's pretty unlikely because of the homology that exists between all human brains.  The fact that the visual/perceptive apparatus in your body is awfully similar to the one in mine suggests that we both perceive the world substantially the same way.

You can never prove it, though, which is why this question will keep coming up during late-night sessions in freshman dorms, lo unto the end of time.

Even though I'm making light of it, color perception is still quite a mystery.  It's known that most people (excluding the colorblind) have three different kinds of "cones," which are the cells in the retina that distinguish color, peaking in the red, blue, and green regions of the spectrum.  A few humans -- predominantly women, because the genes for the cone pigments are on the X chromosome -- are tetrachromats, and have a fourth type of cone, making their color acuity considerably more sensitive than the rest of us, and probably explaining the times my wife has said to me, "You actually think that shirt matches those pants?"

Then there's the mantis shrimp, a marine arthropod that is weird in a great many respects, not least because they have between twelve and sixteen different kinds of photoreceptors.  You have to wonder what the world looks like to them, don't you? 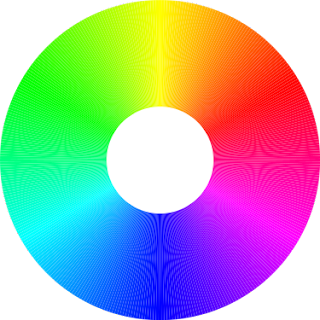 This topic comes up because of a paper that appeared this week in the journal Cell, called "Color Categorization Independent of Color Naming," by a team led by Katarzyna Siuda-Krzywicka, a neuroscientist at Sorbonne University in Paris.  And what this research shows is that our ability to categorize colors -- to determine, for example, that vermilion and scarlet are both shades of red -- is independent of our ability to assign names to colors.

I know, pretty weird, isn't it?  The way that Siuda-Krzywicka and her team approached it was to give two different tasks to people, the first of which required you to identify by number which patches of color in a sample were shades of the same color (i.e., #1 and 2 are the same color, and they're different from #3), and the second of which was to identify what color a particular sample actually was (i.e., #1 is a shade of blue).  Neurotypical people can do both pretty well, with allowances for the aforementioned differences in color sensitivity between individuals.

Where it got interesting was that they included in their study a subject called "RDS" who had suffered an ischemic stroke involving his left posterior cerebral artery five years ago, damaging part of the left occipito-temporal region of his brain.  This stroke interfered with his ability to read and identify certain objects, but its effects were most pronounced in his ability to recognize colors.  When Siuda-Krzywicka's team tested RDS, a fascinating pattern emerged.

Task #1, where subjects were asked to do color categorization -- determine which patches were shades of the same color -- RDS did quite well on, and in fact was very close to the average for test subjects of his gender and age.  However, he was really awful at task #2, trying to figure out what color the patches actually were.

What this indicates is something very curious; our ability to name colors and our ability to recognize color categories are independent of each other.  You can impair one without affecting the other.

The most fascinating part is that the researchers noted that many of the times RDS did get the color name correct, it was because he used his relatively intact ability at categorization, plus his knowledge and memory, to arrive at an answer.  "This is the same color as blood," he said, "and I know blood is red, so this must be red as well."  Naming colors had to be done with a cognitive, logical process, not an automatic recognition as it is done by the rest of us.

It reminds me of my issue with recognizing faces, about which I've written here before.  Although I'm essentially face-blind, I can recognize people sometimes -- putting together what I remember of their hairstyle, coloration, whether or not they wear glasses, and even the way they stand or walk.  But it's nowhere near automatic; it's a logical sequence ("he's the guy who's tall and thin, wears wire-rim glasses, and has curly blond hair"), not an instantaneous recognition.  And it's easily foiled if a person changes hairstyles, wears more (or less) makeup than usual, or -- as I found out last year in one of my classes, when I at first didn't recognize a student I'd taught all year -- simply wears a baseball cap.

This research gives us a bit more information about the sometimes non-intuitive mechanisms by which we perceive the world.  The brain is a complex and fascinating machine.  As a former student once put it, "My brain is so complicated it can't even understand itself."  But it could be worse -- think of what it must be like to be a mantis shrimp.