I still remember when I was about twenty years old, and I first heard about Carl Sagan's proposal to terraform Venus.

On first glance, this is a crazy idea.  Venus brings new meaning to the word "inhospitable."  Its average surface temperature is 462 C.  The atmosphere is mostly carbon dioxide, which is denser than Earth's air, so the pressures at the surface are immense.  (It's the density and composition of the atmosphere that's why early photographs taken by probes on Venus's surface looked warped, as if the probe were sitting at the base of a bowl; the refraction of what light makes it to the surface caused optical distortion.)  If being inside a pressure cooker isn't bad enough, its dense clouds are largely composed of sulfuric acid.

As Sagan himself said, "Venus is very much like hell."

But Sagan was an amazingly creative thinker, and he came up with a proposal for reworking the atmosphere and, possibly, making it livable for Earthlings.  He suggested detonating a rocket carrying a cargo of cyanobacteria in its upper atmosphere, dispersing them into the clouds.  Cyanobacteria are primitive photosynthetic single-celled life forms, and Sagan's idea was that the updrafts would keep at least some of them aloft.  As they tumbled about in the (relatively) temperate clouds, they'd photosynthesize, consuming some of the atmosphere's carbon dioxide and releasing oxygen gas as a waste product.

The idea is that the aerial microbes would multiply, and although some would inevitably sink low enough to fry, enough would stay up in the clouds to steadily drop the carbon dioxide content of the atmosphere.  Less carbon dioxide, less greenhouse effect; less greenhouse effect, lower temperature.  Once the cloud temperature dropped below 100 C, water vapor would condense, and it would rain out the sulfuric acid.

Far-fetched, perhaps, especially for its time.  But it was an exciting enough proposal that I recall discussing it eagerly with my college friends and fellow science nerds.

This all comes up because of a peculiar observation of Venus made recently, by teams at the Center for Astronomy and Astrophysics at the Technical University of Berlin, the University of Wisconsin-Madison, and the Japan Aerospace Exploration Agency.  What they've seen is that there are clouds of "unknown absorbers" darkening the upper atmosphere of the planet in patches -- enough to affect the weather. 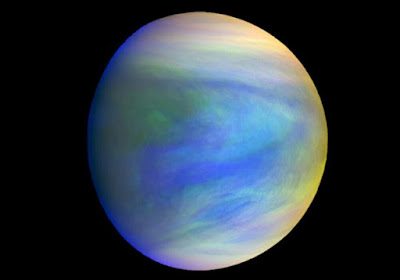 A composite image of theVenus, using data from the Japanese probe Akatsuki.  [Image courtesy of the Institute of Space and Astronautical Science/Japan Aerospace Exploration Agency]

And there are astronomers who think these "unknown absorbers" are not the products of exotic Venusian chemical reactions -- but are airborne single-celled life forms.

"It is hard to conceive of what would cause a change in the [planet's] albedo without a change in the absorbers," said Sanjay Limaye, planetary scientist at the University of Wisconsin-Madison and co-author of a paper last week in The Astronomical Journal that seriously considered the possibility of the absorbers being life forms.  "Since there are few species which have physical, chemical and spectral properties that are consistent with the composition of the Venus clouds, they may have evolved independently on Venus."

The researchers are up front that extraterrestrial microbes are just one possible explanation of the peculiar darkening of the skies, which occurs with an odd periodicity along with an overall decrease in albedo since measurements started in 2006.  It may turn out to be simply a chemical reaction -- still the most likely explanation for the gas output from search-for-life experiments by the Mars landers -- but the fact that scientists are even considering the microbe hypothesis is encouraging and exciting.

Whichever it turns out to be, it seems fitting to end with another quote by Sagan: "Somewhere, something incredible is waiting to be known."