Have fun storming the castle!

It started out as a joke.

Ten months ago, community college student Matty Roberts, of Bakersfield, California, thought it'd be entertaining to start a webpage suggesting that there was going to be a massive gathering to storm the gates of Area 51, the military training site in the Nevada desert that has long been associated with aliens and conspiracies.  Called "Storm Area 51: They Can't Stop All of Us," the webpage turned into an internet sensation, and two million people made noises about showing up to rush into the not-so-secret facility on September 20 and demand the truth about how the military has been covering up hard evidence of extraterrestrial visitation.

Roberts soon learned the truth of the adage "be careful what you wish for, you may get it."  Every bored computer geek would love to have one of their creations go viral, but when that happened here, Roberts panicked.  His panic became worse when the FBI showed up at his door demanding an explanation, and increased again when the Air Force put out a memo saying that they would not hesitate to stop anyone trying to enter Area 51 illegally, including by using deadly force.

But by this time, the "Storm Area 51" phenomenon had taken on a life of its own, and Roberts was unable to stop the juggernaut he'd created.  He wasn't the only one who was freaking out, either.  The elected officials of the town of Rachel, Nevada, near the border of Area 51, were in crisis mode trying to figure out how they would cope with a sudden influx of (potentially) millions of people.  "Law enforcement will be overwhelmed and local residents will step up to protect their property," said a post on the city website.  "It will get ugly."  The commissioners of Lincoln County, where Rachel is located, agreed to declare a state of emergency if they were descended upon by the Storm Area 51 horde. 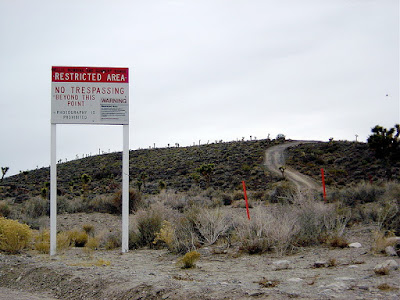 As September 20 approached, the phenomenon showed no sign of abating.  Officials were prepared for the worst.  Guards were placed -- well, even more guards than usual were placed -- around the perimeter of Area 51 to cope with the crowds of people rushing the gates shouting "The Truth Is Out There."

Then the big day dawned...

Well, 150 people traveled within sight of the fence, which isn't illegal anyhow, and only half of those decided to go up to the main gates.  The guards told the 75 who made it to the gates that they couldn't come in, and as befits a bunch of Fearless Conspiracy-Destroying Stormers, all but two of them said, "Oh.  Okay.  Never mind, then."  Of the two who were actually arrested, one of them got caught trying to duck under the fence, and the other was nabbed for pissing on a fence post.

The upshot is that of the millions of Truth Seekers who pledged to get into Area 51 by whatever means necessary, the number who got one foot inside the fence was... one.  And "one foot inside" was apparently all she got before she was cuffed by the authorities.

So... that's kind of underwhelming.  Makes me glad I didn't fork over money for a plane ticket and rental car.  I'm not exactly the lawbreaking type anyhow, so I expect if a guard had told me, "If you try to get in here, I'm going to shoot you so many times your torso will look like a block of Swiss cheese," I'd have looked like one of those Looney Tunes characters who's running away so fast his feet are just a circular blur.

Because that's how brave I am.

In any case, I'm glad no one got hurt, which would have sucked.  And I bet Matty Roberts is breathing a sigh of relief.  Me, I'm still curious about what's in there, although I think the chance that they actually do have evidence of extraterrestrials is slim to none, whatever Fox Mulder would have you believe.  But the fact that this was a big flop says something interesting about human nature, doesn't it?  We have a remarkably short attention span, as a species, and when push comes to shove, most of us will choose to stay home eating potato chips and watching reruns of Dr. Who rather than putting ourselves in an uncomfortable situation.  Which explains a lot about some of the quandaries we've ended up in, and why it's so hard to get people to take action.  I mean, if you can't even get two million people to rush the gates of a military facility to get probably-nonexistent evidence of aliens, you have to wonder what it would take to get people mobilized.