It's no surprise to the people who know me that I'm an enthusiast of body art.

Well, if it was a surprise, it isn't any more, because last month I had a tattoo completed that's a full sleeve, so a little hard to hide except when I'm wearing long sleeves.  Which, being that this is upstate New York, is something on the order of ten months of the year, so maybe people didn't find out till this summer.

In any case, the design has two parts -- a twining series of vines in honor of my gardener mother, and a snake in honor of my outdoorsman, animal-loving father. 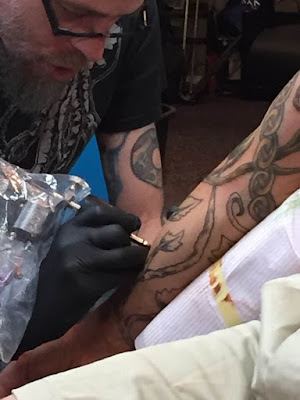 Me being worked on by my artist, the incomparable James Spiers of Model Citizen Tattoos

This comes up because of a study done recently at Wilfred Laurier University (Waterloo, Ontario) by a pair of social psychologists, Anne Wilson and Bradley Ruffle, to find out if there was any personality component to the choice of getting tattoos.  They sorted a thousand volunteers into three groups -- no ink at all, ink that can be easily hidden, and visible ink.  They then gave the volunteers personality assessments geared toward finding out how they scored on measures of short-sightedness and impulsivity.

What they found is that the visible-tattoo group considered the future the least, and were the most impulsive, and the non-tattooed people were the most future-oriented and least impulsive (with the non-visible tattooed people, of course, in the middle on both metrics).  This is, on first glance, not surprising; we've all seen cases of ink that was clearly an ill-thought-out spur of the moment decision (the guy who has "No Ragrets" scrawled on his upper chest being the classic example).  I'm kind of at the other end of the spectrum -- not only am I pretty cautious by nature, I also thought about the decision for all three of my tattoos for over a year, then once I made the decision to go for it, spent equally long planning the design.  As a result, I've never regretted (or ragretted, as the case may be) any of my ink for a moment. 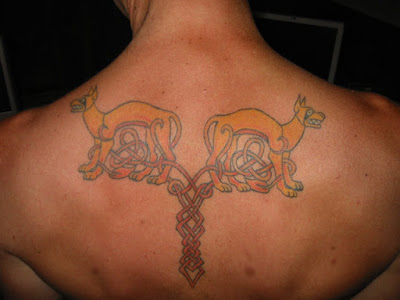 My first tattoo (which I got about fifteen years ago)

So it's unsurprising that counterbalancing outliers like myself would be the fraction of people who either make impulsive jumps into getting inked, or else don't think through the consequences (such as trying to find employment with companies that have a no-visible-ink policy). 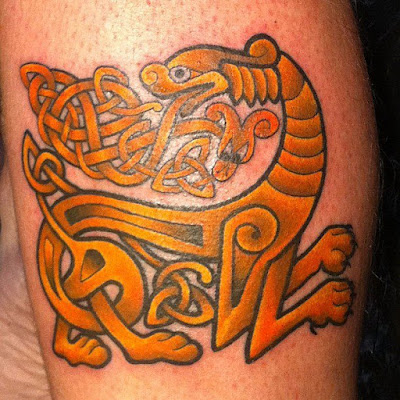 My second one, from about eight years ago -- a Celtic dragon in honor of my Scottish grandma.  [Nota bene: my leg usually isn't this hairless.  This photo was taken the day I got the tattoo done.]

The researchers determined short-sightedness by using a delayed-gratification scenario -- you can get a small payment now, or wait three weeks and get a larger payment.  In the Wilson and Ruffle study, the immediate payment was a dollar, and the delayed payment increased from a dollar to two-fifty (the idea was to see how much of an incentive it would take for people to wait).  The trend was that the non-tattooed people were willing to wait to get a larger payout much more readily than the tattooed people were.

What strikes me is that I'm not at all averse to waiting for a larger reward; I'm about as far from an instant-gratification type as you can get.  But the difference in my life between a dollar and two-fifty is so small that it doesn't seem to matter much, so I can't imagine that small a change influencing my decision any.  Now, if you went from ten to twenty-five dollars, that'd be a hell of a lot more of an incentive, even though it's the same percentage increase.  An extra fifteen bucks would make a difference to me.

So I wonder what would happen if you sliced the data a different way -- group the people according to wealth.  My guess is the poorer people would jump at a quicker (and smaller) reward, and the wealthier people would be more willing to wait -- regardless of their body art.

That's only a guess, of course, and even if I'm right the trend that Wilson and Ruffle found is pretty interesting.  I've had people comment on my tattoos from the standpoint that I don't "seem like the type who would get tattooed."  I don't know about that -- I've always loved body art (artistically done, and in moderation, it can be absolutely beautiful).  I guess being a shy introvert does make it kind of weird that I'd do something that makes me more noticeable.