Is there in truth no beauty?

Today's post is about an odd little piece of research that appeared in the journal Cognition this week, tying together a number of disparate realms -- mathematics, music, art, and the neuroscience of perception.

The study, by Samuel Johnson and Stefan Steinerberger (of the University of Bath and Yale University, respectively), looks at the fascinating question of how our perception of beauty carries across different expressions of the human creative impulse.  I've been interested in this topic for some time, especially with respect to music.  (Artistically, I have the aesthetic sensibilities that God gave gravel, and when my wife and our cultured friends talk art, I usually just keep my mouth shut and nod sagely.)

But the perception of beauty in music has intrigued me ever since my first realization that some pieces of music that thrilled me to the core left other people completely cold, and vice versa.  I have a good friend who, while we agree on many things, has about as opposite tastes to me in classical music as one could possibly have.  He adores Brahms, Mahler, Tchaikovsky, and Rachmaninoff, whereas I don't really care for any of them, and in fact could live happily forever without hearing a piece of Brahms's music again.  My tastes run more to Bach and Scarlatti... and Shostakovich, Stravinsky, and Prokofiev.  (What the link is between those two groups of composers, I have no idea.)

What Johnson and Steinerberger did, though, was to link up people's views of the aesthetic merit of art and music with their perception of beauty in mathematics.  Don't laugh, you non-math types; if you do any digging amongst the writings of mathematicians, you'll find plenty of references to theorems or proofs as being "elegant" or "beautiful," and a while back I did a piece on the claim that Euler's Identity, one of the most curious statements of mathematics, was so beautiful that it is a proof of the hand of the divine.  (To see how far mathematicians will engage in such aesthetic commentary on mathematical theorems, Paul Nahin calls Euler's Identity "the gold standard for mathematical beauty," and Keith Devlin of Stanford University states, "Like a Shakespearean sonnet that captures the very essence of love, or a painting that brings out the beauty of the human form that is far more than just skin deep, Euler's equation reaches down into the very depths of existence.")

So it's not far-fetched to claim that some people see the same kind of beauty in mathematics that many of us do in art and music.  And Johnson and Steinerberger wanted to find out if there's a connection between the three.

They took four theorems from mathematics -- the sum of an infinite geometric series, Gauss’s summation trick for positive integers, the pigeonhole principle, and a geometric proof of a Faulhaber formula.  They used four pieces of music -- Schubert’s Moment Musical No. 4, D 780 (Op. 94), Bach’s Fugue from Toccata in E Minor (BWV 914), Beethoven’s Diabelli Variations (Op. 120), and Shostakovich’s Prelude in D-flat major (Op.87 No. 15) -- and four landscape paintings, Looking Down Yosemite Valley, California and A Storm in the Rocky Mountains, Mt. Rosalie by Albert Bierstadt, The Hay Wain by John Constable, and The Heart of the Andes by Frederic Edwin Church. 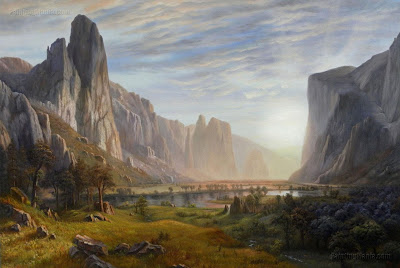 Looking Down Yosemite Valley, California by Albert Bierstadt (1864) [Image is in the Public Domain]

Test subjects were then assigned a series of three rather strange tasks -- to match the music to the mathematical theorems based on how similar they were aesthetically; to pair the art and the theorems the same way; and to rate each of the theorems and the pieces of art and music on nine criteria (seriousness, universality, profundity, novelty, clarity, simplicity, elegance, intricacy, and sophistication).

My immediate reaction to reading this was that I can't see any connection between artistic, musical, and mathematical beauty, at least in the sense that you would look at a landscape painting and be immediately struck the same way as you were by Gauss's summation trick.  I understand finding beauty in each realm, but I can't fathom how they could be connected in any sort of one-to-one correspondence.

But strangely, they seem to be.  The correspondences drawn between art and math and between music and math were remarkably similar across test subjects, as were the rankings given to each, especially on the criteria of elegance, profundity, and clarity.  Whatever it is that gave me such a frisson of wonder when I first came across the formula for the sum of an infinite geometric series -- and yes, that did actually happen, because it's freakin' cool -- causes a consistently similar reaction in people not only seeing art or listening to music, but seeing particular pieces of art or hearing particular pieces of music.

"I’d like to see our study done again but with different pieces of music, different proofs, different artwork,” said Steinerberger.  "We demonstrated this phenomenon, but we don’t know the limits of it.  Where does it stop existing?  Does it have to be classical music?  Do the paintings have to be of the natural world, which is highly aesthetic?"

Which are excellent questions.  For myself, I have incredibly eclectic tastes in music (as evidenced by putting my iPod on "shuffle," and inducing musical whiplash by going directly from a Bach partita to Nine Inch Nails).  Is there some correspondence there -- are other aficionados of Stravinsky also more likely to listen to Linkin Park?  Is there a connection between people who love mathematics and particular styles of music?

And what's going on in our brains when these judgments are being made?

As with much good scientific research, the Johnson/Steinerberger study raises as many questions as it answers.  We still don't know where aesthetic perception comes from, nor why it varies so much from person to person.  But as this study shows, there are some remarkable (and unexpected) similarities in how we perceive beauty.

And that is, in and of itself, kind of beautiful.