Life in the shadows

In Michael Ray Taylor's brilliant1999 book Dark Life, the author looks at some of the strangest forms of life on Earth -- extremophiles, organisms (mainly bacteria) that thrive in places where nothing else does.  Surrounding hydrothermal vents under crushing pressures and temperatures over 100 C, buried underground below the deepest mines, frozen in Antarctic ice, floating in boiling, acidic hot springs.  Taylor himself is a veteran spelunker and got interested in the topic after running into the aptly-named snottites -- biofilms found in caves that hang downward from the ceiling and are the consistency of, well, snot. 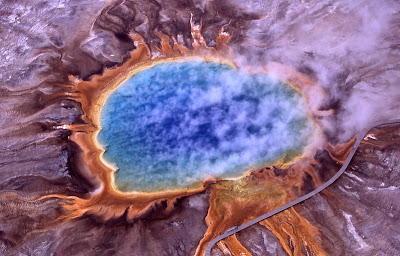 The brilliant colors of Grand Prismatic Spring in Yellowstone National Park are due, in part, to extremophilic bacteria [Image is in the Public Domain]

Taylor's contention -- that such bizarre creatures are so numerous that they outnumber all other life forms on Earth put together -- just got a boost last week from a piece of research published in the Journal of Geomicrobiology.  Written by a team from the University of Toronto -- Garnet S. Lollar, Oliver Warr, Jon Telling, Magdalena R. Osburn, and Barbara Sherwood Lollar -- it describes the discovery, 7,900 meters underground, of a thriving ecosystem of microbes in a mine 350 kilometers north of Toronto.

The life forms are odd in a number of respects.  The first is that they're anaerobic -- they don't need oxygen to survive.  The second is that they metabolize sulfur, primarily in the form of iron sulfate, better known as pyrite or fool's gold.  It's a food chain completely unhooked from light -- for nearly every other organism on Earth, the energy they contain and utilize can ultimately be traced back to sunlight.  Here, if you follow the energy backwards, you arrive at the geothermal heat from the mantle of the Earth producing reduced (high energy) compounds that can support a food web, similar to what you see in deep-sea hydrothermal vents.

"It's a fascinating system where the organisms are literally eating fool's gold to survive," team member Barbara Sherwood Lollar said in an interview with NBC News. "What we are finding is so exciting — like ‘being a kid again’ level exciting."  The ecosystem is in the Laurentian Shield, one of the oldest and most geologically-stable places on Earth, so it's likely that this thriving community deep underground has been there for a billion years or more.  "The number of systems we've looked at so far really is limited, but they probably had a single origin at some point in life’s four-billion-year history."  As far as their discovery, she added, "We see only what we look for.  If we don't look for something, we miss it."

And it's a lot to miss.  The current research springboards off a 2018 report sponsored by the Deep Carbon Observatory conducted by a team led by Cara Magnabosco, a geobiologist at the Swiss technical university ETH Zurich, which estimated that some 5 x 10^29 cells live in the deep Earth.

For those you who don't like scientific notation, that's five hundred thousand trillion trillion organisms.  Put succinctly, it's a really freakin' huge number.

Considering the (to us) inhospitable conditions a lot of these organisms live under, it raises hopes of finding life in other, perhaps unexpected, places in the universe.  Astronomers talk about the "Goldilocks zone," the region around a star that has temperatures where water is a liquid, and that to host life a planet would have to have a similar mass to Earth and be orbiting a star relatively similar to the Sun.  The University of Toronto research suggests that may be placing unnecessary and inaccurate strictures on where life can exist, and that we may have to rethink our definition of what we mean by "hospitable conditions."

Which also raises the question of whether we'd recognize alien life if we saw it.  Star Trek may have been prescient; they expanded the boundaries of what we think of as life by featuring aliens that were gaseous, crystalline, thrived at searing temperatures, could tolerate the chill dark vacuum of space, or were composed of pure energy.  While some of these -- at least at first glance -- seem pretty far-fetched, what the current research suggests is that we shouldn't be too hasty to say, "Okay, that's out of the question."

"We've literally only scratched the surface of the deep biosphere," said Robert Hazen, mineralogist at the Carnegie Institution’s Geophysical Laboratory in Washington, and co-founder of Deep Carbon Observatory.  "Might there be entire domains that are not dependent on the DNA, RNA and protein basis of life as we know it?  Perhaps we just haven’t found them yet."