One of the most biologically unique spots on Earth is Australia.

Besides the fairly familiar suite of marsupial mammals, there are a lot of curious life forms.  Australia's coastal waters are the home of one of the most venomous animals in the world, the innocuous-looking box jellyfish, which has an LD-50 (dosage that is lethal to 50% of the lab animals tested) of 40 millionths of a gram per kilogram of body weight, making it one of the most toxic naturally-occurring substances known.  On a happier note, in the western parts of the country there are lyrebirds, which not only have weird threadlike tail-feathers (giving them their name, as they look like the strings of a lyre), but are some of the most accomplished avian mimics -- able to imitate cellphones, chainsaws, camera shutters, and car alarms.

Even the plants are bizarre.  One you may not have heard of is the gympie-gympie (Dendrocnide moroides), common in the rain forests of the northeast, which is covered with hairs made of silica.  Yes, that's glass.  Each of the hairs is tipped with a rather horrifying toxin, making contact with the plant excruciating.  One guy who got smacked in the face by the plant still had searing pain when he'd take a cold shower two years later.

Oh, but the Wikipedia page says the fruits are edible "if the stinging hairs that cover it are removed."

Nope.  No thanks.  I can't imagine how hungry I'd have to be even to give that a try.

The main reason for the strange flora and fauna is that the island has been geologically separated from everywhere else since it separated from Antarctica a hundred million years ago -- a point in Earth's history during which the dinosaurs were still stomping around.  This is a hell of a long time for a community of organisms to evolve along their own pathways, so it's no great wonder that many of the creatures found there exist nowhere else on Earth.  (Australia is currently heading toward Asia, but the plate is moving at a barely-perceptible seven centimeters a year -- about the speed with which your fingernails grow.  Collision is expected in, oh, about a hundred million years or so -- at which point Australia's life forms will have to contend with an influx of new species from southeast Asia.  But so it goes.  At least they have a while to prepare.)

This all comes up because of two bizarre recent discoveries in the Australian fossil record, both of very large marsupial mammals that went extinct in the Pleistocene Epoch, on the order of 1.5 million years ago.  Australia doesn't have any marsupial mammals that are very large -- the current record holder is the red kangaroo, at 1.5 meters and eighty or so kilograms.  (Even some of the smaller ones, though, were pretty scary.  If you want something to haunt your nightmares, consider the flesh-eating kangaroo Ekaltadeta ima, which lived during the Miocene Epoch and weighed on the order of thirty kilograms.  The hopping jaws of death, those were.)

In any case, the two discoveries that were the subjects of papers released last week weren't so scary, but were just as strange.  First, we have fossils of a paleorchestid -- a bizarre, superficially tapir-like marsupial only distantly related to the familiar kangaroo and koala -- which topped out at a thousand kilograms.  If its size isn't striking enough, what the current paper looks at is its bizarre bone structure, which included forelimbs locked in place at about a hundred-degree bend at the elbow.  So they couldn't flex their arms -- giving them stability, and (the authors surmise) a better ability to lever out chunks of the plants that formed their diet, but severely limiting their ability to play tennis. 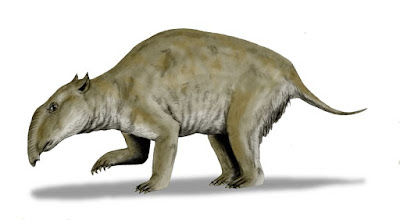 A reconstruction of a paleorchestid, whose expression suggests he's up to something [Image licensed under the Creative Commons Nobu Tamura, Palorchestes BW, CC BY 3.0]

The second discovery is of a giant kangaroo relative with a "crushing bite" -- not, apparently, for eating meat, but chewing up tough plants.  The species, Simosthenurus occidentalis, was one of a group called "short-faced kangaroos" which are all extinct now and some of which approached two meters tall.

"Compared to the kangaroos of today, the extinct, short-faced kangaroos of ice age Australia would be a strange sight to behold," said Rex Mitchell of the University of Arkansas, leader of the team that analyzed the skulls, in an interview with Science Daily.  "The skull of the extinct kangaroo studied here differs from those of today's kangaroos in many of the ways a giant panda's skull differs from other bears. S o, it seems that the strange skull of this kangaroo was, in a functional sense, less like a modern-day kangaroo's and more like a giant panda's...  All this bone would have taken a lot of energy to produce and maintain, so it makes sense that such robust skulls wouldn't have evolved unless they really needed to bite hard into at least some more resistant foods that were important in their diets." 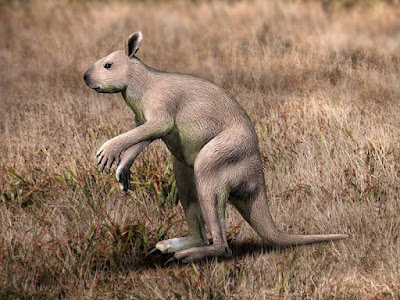 Sthenurus sterlingii, one of the short-faced kangaroos (not the one studied in the paper cited) [Image licensed under the Creative Commons Nobu Tamura (http://spinops.blogspot.com), Sthenurus stirlingi, CC BY 3.0]

So the odd life forms in Australia are the descendants and/or cousins of equally odd life forms that aren't around any more.  Which is probably a good thing.  The box jellyfish and the gympie-gympie plant are enough to worry about, along with the myriad other venomous snakes and spiders and whatnot.  If you added the Scary Nightmare Kangaroo of Doom to the mix, I'd just avoid the place altogether.