What do you do with a piece of research that (from the paper itself) sounds like it was done right, but appears in a journal that is notorious for publishing highly suspect papers in the past?

That was my reaction -- well, my question, anyhow -- after reading "A Camera-Based Tracking System for Ouija Research" by Eckhard Kruse, which appeared last month in The Journal for Scientific Exploration.  The JSE has a reputation for being filled with woo, fringe/pseudoscience, and wacko claims, something that has merited the following entry in Rational Wiki (which is never afraid to speak bluntly):


JSE has much less to do with science than it does with whatever pet crank theories its editors are out to promote.  It's chock-full of all kinds of woo, including (but not limited to) alternative medicine, astrology, remote viewing, AIDS denial, quantum woo, UFOs, and much, much more!

So given that, it's unsurprising that they published a paper investigating Ouija boards in the first place.

The conventional explanation for the Ouija phenomenon is the ideomotor effect, wherein a thought, mental image, or suggestion results in a movement of the body, seemingly spontaneous or beneath the individual's conscious awareness.  The idea is that when people have their fingers on a Ouija planchette, they're subconsciously directing it to spell out a message that makes sense. 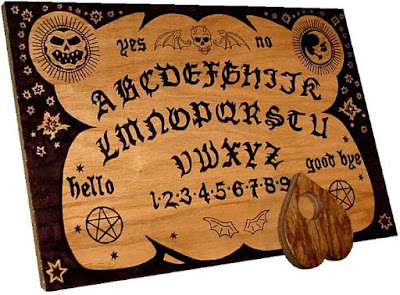 What the researchers were looking for was evidence that the planchette movement occurred independently of the individuals touching it -- something claimed by aficionados of Ouija boards, who apparently believe that the planchette is being manipulated by a spirit, and the people involved are only acting as a conduit of the "energy" (that word being used in the usual fluffy non-scientific fashion).  They put sensors on the planchette that detected whether the fingertips moved prior to the planchette sliding (indicating the "sitters" were directing its motion) or that the fingers and planchette started moving simultaneously (suggesting the paranormal explanation).  They also looked at the speed with which the planchette selected letters, claiming that if it was the ideomotor effect at work, the selection should speed up within a particular message, because once the first couple of letters (presumably chosen at random) are selected, this suggests an actual word to the "sitters," so the rest of the message is selected more quickly.

Perhaps unsurprisingly, the results were fairly equivocal.  The motion sensors did indicate that the "sitters'" fingertips moved prior to the planchette sliding, but the expected increase in speed once a message begins did not happen.  Here were a few of the conclusions the researchers made:

So nothing here blows me out of the water, but still, this seems to me to be the right approach for testing any paranormal claim.

Oh, and then there's the part at the end of the paper where Kruse admits that blind Ouija sitting never works -- that as soon as the "sitters" are blindfolded, the messages stop coming.  You wouldn't think it would matter if the spirits were controlling the thing, would you?

So I'm still pretty confident that there's nothing supernatural going on with Ouija boards, however bent out of shape people get over how diabolical the things are and how they're summoning up demons and whatnot (every time I mention them in Skeptophilia I get emails about how I shouldn't ever touch one because they're eeeeeevil.).  The most parsimonious explanation is pretty clearly ideomotor phenomena, and anyone wanting to get a skeptic to believe anything else would have to come up with better evidence than Kruse did.

And, for the record, publish it in a journal that doesn't have a reputation for printing crap.  My guess is if someone did find hard, replicable evidence for any kind of paranormal claim, it wouldn't be difficult to find reputable journals interested in it -- provided it met the minimum standard for controlled experimentation.