Silence in the skies

Much as I hate to end the week on a dark note, I felt like I had to tell you about an alarming piece of research indicating that we may be in a lot more ecological trouble than we realized.

My wife and I live in a very "birdy" area -- right in the middle of a flyway, so we get a lot of what are called "passage migrants" that come through in spring heading to breeding grounds in eastern Canada, and back again in autumn as they fly toward their winter homes in more temperate latitudes.  We also have a great number of breeding residents, and (especially in a rural area such as ours) any wooded areas or natural fields are usually alive with birds, especially in late spring and early summer.

This spring, though, we noticed that there seemed to be a much smaller number, and smaller diversity, than usual.  One of the first spring birds we hear around here is the Eastern Phoebe, and the first one I heard was weeks later than usual (and we heard very few of them at all, despite the fact that they're very common most years).  We ordinarily have Baltimore Orioles nesting in our back yard, and I only heard a single oriole -- and that from a distance -- all summer.  The lovely Rose-breasted Grosbeak, usually a common bird at our feeders, showed up only once or twice in May, and not at all afterward. 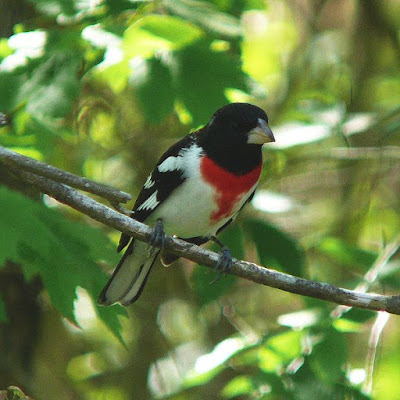 [Image is in the Public Domain, courtesy of photographer Ken Thomas]

Not a single Scarlet Tanager this year.  No Least Flycatchers.  No House Wrens.  No Ruby-throated Hummingbirds.  No Veeries (sad, because its beautiful song is usually a lovely part of a walk through the woods around here).  No Black-throated Blue, Black-throated Green, Blue-winged, or Black-and-White Warblers.  Barely any Eastern Meadowlarks (usually common in the field across the road from our house, and part of the dawn chorus all summer), Indigo Buntings, Savannah Sparrows, Wood Thrushes.

Now, I'm not saying this decline was true everywhere, and it may be that some of the species we didn't see this year were abundant elsewhere.  But the shift in what once were commonplace backyard birds was striking -- and disconcerting.

Apparently, however, we're not the only ones who are experiencing an overall decline in numbers and diversity.  According to a paper published this week in Science, compared to 1970 there's been a 29% overall decrease in avian populations in the United States.

You read that right.  Over one in four are gone, an estimated total of three billion birds.

If this doesn't scare the absolute shit out of you, you need to stop and think about this a little more.

This loss of America's avifauna affects more than just birders, especially when you read the paper and find out that the decline wasn't uniform.  Species whose habitat was protected under the Migratory Bird Act -- mainly waterfowl like ducks and geese -- have done all right, and in fact some species have increased in numbers since 1970.  The hardest hit were the woodland and grassland birds -- species vulnerable to poor land utilization practices, habitat loss, and the increasing use of pesticides in agriculture.

Still, why does it matter?  A few pretty birds gone, which is sad, but why is it a concern for your average human being?  The term "canary in the coal mine" has almost become a cliché, but it applies here.  These species are sounding the alarm for overall ecological degradation, which ultimately affects all species, ourselves included.  The idea that we can devastate the environment and reap no consequences can only be believable if you have no concept whatever of how biology works.

If we don't change our ways, we're going to get our comeuppance sooner rather than later.  You can't keep pulling threads out of the tapestry without the entire thing falling to pieces.  Or, as Sierra Club founder John Muir put it: "When we try to pick out anything by itself, we find it hitched to everything else in the Universe."