The attraction of fear

The question of the day is: why do people continue to support certifiable wackos long after their wacko status has been proved beyond a shadow of a doubt?

Yes, I know, it's when the wacko is espousing a view the wacko-supporter already believes.  But this brings up a deeper question; why do people want to believe ugly counterfactual nonsense?

Unsurprisingly, this topic comes up because of Alex Jones, who is somehow still out there broadcasting on InfoWars despite recently losing an appeal in the million dollar lawsuit for defamation and personal harm filed against him by parents who lost children in the Sandy Hook Massacre, which Jones described as a hoax and/or a false flag.

So you'd think that any credibility Jones had would be down the toilet, but apparently not.  In a story sent to me by my friend and fellow writer Dwayne Lanclos, whose blog The Critical Bible gives a fascinating lens into biblical history and archaeology, we find out that Jones is going strong and still as loony as ever.  Dwayne sent me a link to an article from Media Matters for America, which referenced the ongoing and increasingly bizarre determination by Donald Trump not to admit he made a silly mistake when he included Alabama in amongst states threatened by Hurricane Dorian.  Instead of doing what any normal person would have done -- chuckle and say, "whoa, that was a screw-up -- sorry" -- he not only acted like a toddler, stamping his feet and saying, "No, I was right!  I was right!", but produced a weather map he'd altered himself with a black sharpie as evidence, and weirdest of all, just yesterday tweeted a video of him with the altered map, combined with a cat chasing a laser pointer. 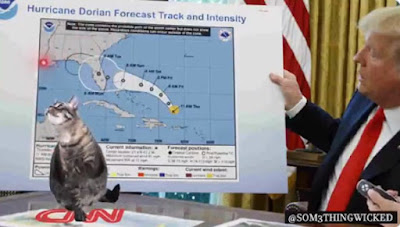 As an aside, how anyone can look at any of this behavior and not think, "Trump has lost his fucking marbles," I have no idea.  But so far, all that's happened is that Lindsay Graham made a statement in an interview with Chris Wallace on Fox News that "a third term is looking better and better."  And no, for the record, I didn't make that up.

Anyhow, Alex Jones decided to weigh in on the Hurricane Dorian/Alabama nonsense, and what he said you really should listen to (there's a video clip on the Media Matters link I posted above).  But in case you don't want to waste five minutes of your life you'll never get back again, here are the main points:
Now, to make it clear: I'm not really commenting on Jones, here.  It's yet to be established whether he believes all the conspiratorial horseshit he says, or if he's "an actor playing a role" (as his lawyer claimed in the custody case over Jones's children, which Jones ultimately lost).  And honestly, I don't really care which it is.

What concerns me are the folks who believe him, of which there is a sizable number to judge by the number of people calling in support during his show.  What in the hell can possibly be appealing about that viewpoint -- that there's some kind of vast conspiracy against Donald Trump, run by mythical people powerful enough to steer a category-5 hurricane?

Speaking of hurricanes, there's the statement by self-styled "Christian prophetess" Kat Kerr, who (1) claimed her prayers were shifting the hurricane's path, and (2) when that didn't work out so well, said that God destroyed the Bahamas on purpose.  Here's the exact quote:


The Bahamas got hit a lot. I am just gonna leak out a little information for you, that people may not even know about, but you need to know that a lot of the human trafficking goes on there, in that very place, and it’s being exposed, because God’s exposing stuff like that.

… I’m not saying everyone on the island was involved in that, but that is a huge center, where a lot of people who are trapped in human trafficking, and those people doing it, are involved in a huge way, in the Bahamas, they use the Bahamas as part of their transport system… and they actually have tunnels — this is already gonna be in the news — they have tunnels where [they] file through there.  I think the tunnels were wiped out by the storm.

Which, now that I think of it, isn't so far off from a lot of genocidal shit God did in the Old Testament.

But again, what I wonder is not about Kerr herself, because she's obviously a wingnut, but the people who hear this and go, "Yes, that makes sense!  Hallelujah!"  What could possibly be attractive about a god who destroys an entire fucking country to stop some human traffickers?

Then there's Rick Joyner, head of MorningStar Ministries, who says that Christians need to arm themselves because there's going to be a civil war, and they have to be ready to take out pretty much anyone who isn't a straight white conservative Christian:


We were meant to have militias throughout the country to defend our communities …  I think there is going to be a militia movement that unites and supports and is open about what they are doing and they are going to be trained and prepared to defend their communities.

If Christians don’t get involved in things like that, [the] wrong people will get in,  Christians need to get in to set the course.  We’re not just going to attack other races; we’re here to defend and support.  Christians have to get engaged in it.  Jesus himself said, "There is a time to sell your coat and buy a sword."  That was the weapon of their day."

We are entering a time for war and we need to mobilize.

So once again, I'm wondering who hears this, then looks around them and thinks, "Yup, that seems right to me."

Most blatant of all was the exchange between Sohrab Ahmari, op-ed editor of the New York Post and a devout conservative Catholic, and David French of the National Review, in which we find out that Ahmari believes Christians in the United States are literally in danger of being rounded up and killed.

Despite the fact that three-quarters of Americans consider themselves Christian, and Christians are the vast majority in every elected position in the country.

Now there are people who are called to [martyrdom], and they’ll face it when it happens, and they should.  And there are also religious people here … priests and so forth, who are called to this sort of heroic life.  But we shouldn’t want that for all Christians while we have political agency...  We should try to forestall the Colosseum.  So that means not Bernie Sanders.

And he wasn't talking about some kind of metaphorical martyrdom, e.g., being pushed out of majority status.  He actually thinks that if Trump doesn't win, we atheists are going to start rounding Christians up and shooting them in the street.

French, for his part, found the whole thing amusing, which it would be if people weren't taking it seriously -- and basing their actions, and their votes, on this kind of fear.   "Do you think Bernie Sanders would bring the Colosseum?" he said.  "He doesn’t even have a plan to deal with Mitch McConnell."  But during the q-and-a period that followed their debate, it was obvious that yes, Ahmari thought that -- and so did some of the audience.  One woman said, "I think socialism is the Colosseum.  Rounding up Christians."

Which also shows that there are people who need a refresher on the definition of "socialism."

Fear is a powerful motivator, and heaven knows Fox News and the extreme right talking heads like Rush Limbaugh, Sean Hannity, and Tucker Carlson have been pushing the fear-message for years: you're at risk, anyone different is evil, prepare to defend yourself, there are sinister forces at work.  And I suspect that part of it is that there is bad stuff in the world, a lot of it random, and it might be more comforting that there's a reason behind it all -- even if the reason is horrible -- than thinking that the universe is simply a chaotic place where sometimes awful things happen to good people.

But still.  I don't see why the people who listen to all of this stuff don't suddenly wake up one morning and go, "Man, this is a terrible thing to believe about my fellow human beings, and a terrible thing to believe about the deity I think controls everything."  But they don't.  Somehow, bafflingly, some folks respond by doubling down their support for a president who seems to be progressively losing his mind, conspiracy theories claiming that The Forces of Evil can steer a hurricane solely to discredit climate change deniers, fear talk about arming yourself against people of other beliefs and other races, a conviction that liberals want nothing more than to round up and kill Christians, and a view of God as a vindictive being who'll destroy several islands in the effort to take out a few bad guys.

And that I truly don't comprehend.