A chat at the pub

When I'm out in a crowded bar, I struggle with something that I think a lot of us do -- trying to isolate the voice of the person I'm talking to from all of the background noise.

I can do it, but it's a struggle.  When I'm tired, or have had one too many pints of beer, I find that my ability to hear what my friend is saying suddenly disappears, as if someone had flipped off a switch.  His voice is swallowed up by a cacophony of random noise in which I literally can't isolate a single word.

Usually my indication that it's time to call it a night. 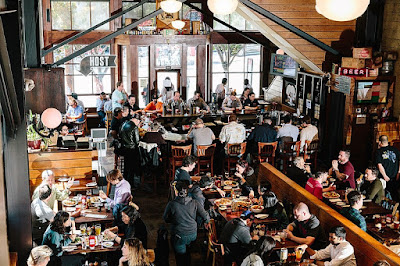 It's an interesting question, though, how we manage to do this at all.  Think about it; the person you're listening to is probably closer to you than the other people in the pub, but the others might well be louder.  Add to that the cacophony of glasses clinking and music blaring and whatever else might be going on around you, and the likelihood is that your friend's overall vocal volume is probably about the same as anyone or anything else picked up by your ears.

Yet most of us can isolate that one voice and hear it distinctly, and tune out all of the other voices and ambient noise.  So how do you do this?

Scientists at Columbia University got a glimpse of how our brains might accomplish this amazing task in a set of experiments described in a paper that appeared in the journal Neuron this week.  In "Hierarchical Encoding of Attended Auditory Objects in Multi-talker Speech Perception," by James O’Sullivan, Jose Herrero, Elliot Smith, Catherine Schevon, Guy M. McKhann, Sameer A. Sheth, Ashesh D. Mehta, and Nima Mesgarani, we find out that one part of the brain -- the superior temporal gyrus (STG) -- seems to be capable of boosting the gain of a sound we want to pay attention to, and to do so virtually instantaneously.

The auditory input we receive is a complex combination of acoustic vibrations in the air received all at the same time, so sorting them out is no mean feat.  (Witness how long it's taken to develop good vocal transcription software -- which, even now, is fairly slow and inaccurate.)  Yet your brain can do it flawlessly (well, for most of us, most of the time).  What O'Sullivan et al. found was that once received by the auditory cortex, the neural signals are passed through two regions -- first the Heschl's gyrus (HG), and then the STG.  The HG seems to create a multi-dimensional neural representation of what you're hearing, but doesn't really pick out one set of sounds as being more important than another.  The STG, though, is able to sort through that tapestry of electrical signals and amplify the ones it decides are more important.

"We’ve long known that areas of auditory cortex are arranged in a hierarchy, with increasingly complex decoding occurring at each stage, but we haven’t observed how the voice of a particular speaker is processed along this path," said study lead author James O’Sullivan in a press release.  "To understand this process, we needed to record the neural activity from the brain directly...  We found that that it’s possible to amplify one speaker’s voice or the other by correctly weighting the output signal coming from HG.  Based on our recordings, it’s plausible that the STG region performs that weighting."

The research has a lot of potential applications, not only for computerized vocal recognition, but for guiding the creation of devices to help the hearing impaired.  It's long been an issue that traditional hearing aids amplify everything equally, so a hearing-impaired individual in a noisy environment has to turn up the volume to hear what (s)he wants to listen to, but this can make the ambient background noise deafeningly loud.  If software can be developed that emulates what the STG does, it might create a much more natural-sounding and comfortable experience.

All of which is fascinating, isn't it?  The more we learn about our own brains, the more astonishing they seem.  Abilities we take entirely for granted are being accomplished by incredibly complex arrays and responses in that 1.3-kilogram "meat machine" sitting inside our skulls, often using mechanisms that still amaze me even after thirty-odd years of studying neuroscience.

And it leaves me wondering what we'll find out about our own nervous systems in the next thirty years.