A window into the distant past

I love a good mystery, and mysteries abound regarding human prehistory.

Of course, that's kind of self-evident, given that it's pre-history.  Anything we know is based on inference, from looking at artifacts and other traces left behind for us to find.  And like fossils, we have to keep in mind that what we're seeing is a small percentage -- no one knows how small -- of what was originally out there.  (One of my biology professors said that trying to reconstruct the Tree of Life from the existing fossil record is analogous to reconstructing the entire History of Art from a dozen paintings or sculptures chosen at random from the tens of thousands that have been created by humanity.  This was before the use of genetic evidence for determining phylogeny, so the situation has improved -- but we're still working from inference and very incomplete evidence.)

So that's pretty much where we are with our knowledge of human prehistory.  Which is why when there are eye-opening new discoveries in that field, it always makes me sit up and take notice.

Today we're going to look at three new archeological finds that have given us a new lens into our distant ancestors' lives, and all of which were published in the last week.

First, some new artifacts from Scotland have provided information about one of the least-known European cultures -- the Picts.

The Picts were a collection of (probably) Celtic-speaking tribes that inhabited Scotland prior to its invasion first by the Irish Dál Riata and then by the Vikings.  We know next to nothing about them or their culture.  Even the name of the group isn't native to them -- it comes from the Latin pictus ("painted"), from their habit of going into battle naked, covered with paint.

Which, I have to admit, is pretty damn badass.

But we don't know much else about them, because they left no written records at all.  We assume they spoke a Celtic language, but don't really know for sure; and any suggestion of root words in Gaelic that may have come from Pictish are guesses (such as the claim that place names starting with Pit-, Lhan-, and Aber- come from Pictish words).

So any artifacts that are unequivocally Pictish in origin are pretty amazing.  Like the ones discovered earlier this year by Anne MacInnes of the North of Scotland Archaeological Society. 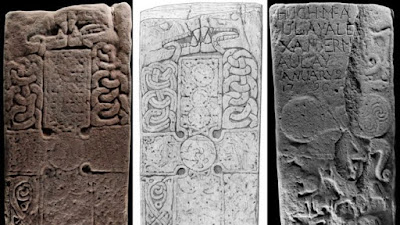 The face of the stone in the photograph not only has designs and a pretty cool-looking mythical beast, it has an inscription -- in Latin letters -- that may well be a Latin transliteration of the Pictish language.  Which makes it a rarity indeed.

"The two massive beasts that flank and surmount the cross are quite unlike anything found on any other Pictish stone," said John Borland, of Historic Environment Scotland and the Pictish Arts Society.  "These two unique creatures serve to remind us that Pictish sculptors had a remarkable capacity for creativity and individuality.  Careful assessment of this remarkable monument will be able to tell us much about the production of Pictish sculpture that we could never have guessed at."


Then, there's the discovery that was made near the Tollense River, on the Baltic coast of Germany, that indicates the existence of mercenary soldiers -- three thousand years ago.

On a historic -- well, prehistoric -- battleground, a team from the Lower Saxony State Agency for Cultural Heritage discovered, alongside skeletal remains showing war-related injuries, a toolkit brought in by one of the soldiers.  It contains a chisel, a knife, an awl, and a small sword, along with fasteners that seem to indicate its origin in southern Germany -- a distance of about five hundred miles. 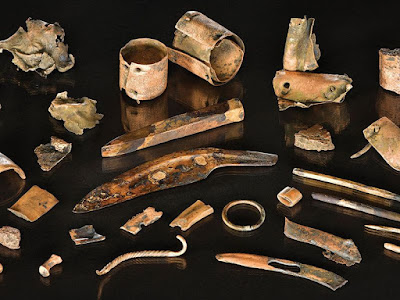 "It was a surprise to find a battlefield site.  It was a second surprise to see a battlefield site of this dimension with so many warriors involved, and now it's a big surprise that we are dealing with a conflict of a European scale," says Thomas Terberger, co-author of the study.  "We had before speculated that some of these people might have come from the south.  Now we have, from our point of view, a quite convincing indication that people from southern Central Europe were involved in this conflict."

Suggesting that the man who carried the bag may have been a mercenary, although that is (of course) an inference.  So right around the time King David ruled the Israelites, there were professional soldiers waging war upon either other in northern Europe.

Last, we have a study showing that the Greek islands have been occupied for longer than we'd realized...

When most people in North America and Western Europe think of an "old civilization," they come up with Greece, Rome, Egypt, Sumer, China, India, the Inca, the Mayans...  but all of those (venerable and fascinating though they are) only date back a few thousand years.  The Great Pyramid at Giza, for example, was built around 3,500 years ago -- which seems like a lot.

But this new discovery shows that the island of Naxos was inhabited by our ancestors (and/or near relatives) two hundred thousand years ago.

At that point, they weren't exactly human, or at least not what we usually consider to be modern humanity.  These inhabitants of Naxos were Neanderthals, and had crossed into what is now an island during a time when the sea level was considerably lower because a lot of the water was locked up in glacial ice.

"Until now, the earliest known location on Naxos was the Cave of Zas, dated to 7,000 years ago," said project director Tristan Carter, an anthropologist at Ontario’s McMaster University.  "We have extended the history of the island by 193,000 years...  It was believed widely that hominin dispersals were restricted to terrestrial routes until the later Pleistocene, but recent discoveries are requiring scholars to revisit these hypotheses."

The word "Neanderthal" has, in common parlance, become synonymous with "uncultured cave man," and that characterization misses the mark by a mile.  They had culture -- they buried their dead, apparently made music, and may have even had spoken language (DNA studies show that they had the FOX-P2 gene, which is one of the genetic underpinnings of language in humans).  They made artifacts not only of utility but of great beauty: 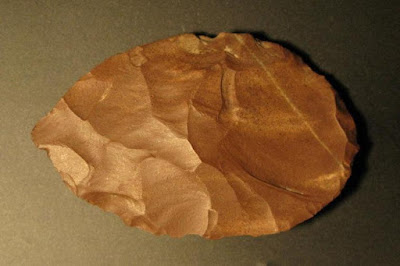 A Neanderthal Acheulean hand-axe from about 50,000 years ago

Some of the archaeologists associated with the Naxos study even think the Neanderthal inhabitants of the island may not have walked there when the sea level was low -- they may actually have arrived there by boat.

It's also uncertain that they actually represent a different species from us.  Most of us carry Neanderthal genetic markers -- apparently I have three-hundred-odd of them, making me in the sixtieth percentile, cave-man-wise -- so there was definitely interbreeding between them and modern humans.  So they might be more correctly considered a subspecies -- although, as I've mentioned before, the concept of species is one of the wonkiest definitions in biology, and all attempts to refine it have resulted in more exceptions and contradictions than ever.

So probably best just to say that they're part of the family.

In any case, we've got three papers in one week that give us some very impressive new data on prehistory.  Until we invent time travel, this kind of evidence is about all we can rely on to create a picture of what life was like back then.  Which, even with the new information, leaves lots of room for refinement -- and imagination.