New from the I Swear I'm Not Making This Up department, we have: a company selling "Jesus sneakers."

Brooklyn-based design company MSCHF has launched a new concept in trainers, which are Nike-emblazoned athletic shoes which have several interesting features:
They went on sale on Tuesday, and sold out in a matter of minutes.

Now, for the kicker.  I haven't told you how much they cost. 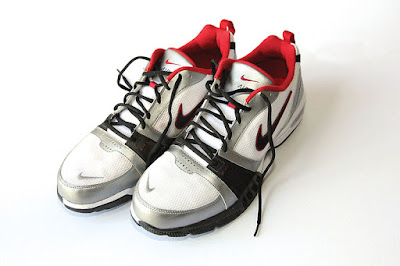 It is hard for me to fathom that there are that many people with enough disposable income to blow what for many of us is at least a month's salary on a pair of holy shoes.  I mean, did they think the shoes would actually allow you to walk on water, or something?  Because that at least would be kind of funny, combining loopy religious beliefs with the Darwin Awards.

Turns out, the Chief Commerce Officer of MSCHF, Daniel Greenberg, thought the whole thing was a joke.  He'd been amused by "collab culture," where two companies with unrelated products will team up for some kind of marketing drive (a good example is Uber and Spotify).  MSCHF thought they'd push it one step further, with a collab between a company and a divine entity.  "[W]e wanted to make a statement about how absurd collab culture has gotten," Greenberg said.  "We were wondering, what would a collab with Jesus Christ look like?"

Myself, I don't think they were "making a statement," or in fact, gave a rat's ass about the "absurdity" of collab efforts.  This was a money-making effort, pure and simple, and as such succeeded brilliantly.

There's a lot about this that bothers me, though.  It's not that I'm not sometimes critical of religion; any long-term readers of Skeptophilia know that I don't believe in giving a bye to hypocritical or immoral behavior simply because it comes under the heading "this is part of my religion."  But this isn't criticism of religion, unless you take it as some kind of twisted jab at people wanting to spend lots of money for something that they think will confer a blessing on them.

This is using people's beliefs and devotion to make money.

On the one hand, it's easy to laugh at anyone that gullible, but this is where we run head-on into one of the guiding principles of my life, which is, "Don't be a dick."  I have no problem with skewering sacred cows when it's warranted, but ridiculing people's cherished beliefs for no good reason -- even if you don't share those beliefs -- is nothing more than smug, self-righteous nastiness.

And it's a little hypocritical to lambast multi-million-dollar celebrity preachers like John Hagee and Franklin Graham for their smug, self-righteous nastiness, and then engage in the same behavior yourself.

So I find the whole thing distasteful, and Greenberg's blithe attitude toward using people's beliefs to rip them off is a little sickening.  You might expect, given my staunch atheism, that I would have joined in the laughter at people willing to fork over three thousand bucks for a pair of Jesus sneakers -- if so, sorry, I'm not laughing.  There's plenty about religion and politics and the world in general to criticize, or even to laugh at.  This one is just self-congratulatory cupidity -- and, honestly, says more about the people selling the shoes than it does about the ones buying them.