Breaking the world in two

It's no revelation to regular readers of Skeptophilia that I'm fascinated with quantum physics.

In fact, some years ago I was in the car with my younger son, then about 17, and we were discussing the difference between the Many-Worlds and the Copenhagen Interpretation of the collapse of the wave function (as one does), and he said something that led to my writing my time-travel novel, Lock & Key: "What if there was a place that kept track of all the possible outcomes, for every decision anyone makes?"

And thus was born the Library of Possibilities, and its foul-mouthed, Kurt-Cobain-worshiping Head Librarian, Archibald Fischer.

The Many-Worlds Interpretation -- which, put simply, surmises that at every point where any decision could have gone two or more ways, the universe splits -- has always fascinated me, but at the same point, it does seem to fall into Wolfgang Pauli's category of "not even wrong."  It's not falsifiable, because at every bifurcation, the two universes become effectively walled off from each other, so we wouldn't be able to prove or disprove the claim either way.  (This hasn't stopped fiction writers like me from capitalizing on the possibility of jumping from one to the other; this trope has been the basis of dozens of plot lines in Star Trek alone, where Geordi LaForge was constantly having to rescue crew members who fell through a rip in the space-time continuum.)

So it was with great curiosity that I read an article written by physicist Sean Carroll that appeared in Literary Hub last week, that looks at the possible outcome in our own universe if Many-Worlds turns out to be true -- and a way to use quantum mechanics as a basis for making choices. 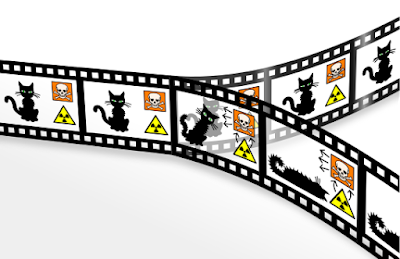 
[Keep in mind] the importance of treating individuals on different branches of the wave function as distinct persons, even if they descended from the same individual in the past.  There is an important asymmetry between how we think about “our future” versus “our past” in Many-Worlds, which ultimately can be attributed to the low-entropy condition of our early universe.

Any one individual can trace their lives backward in a unique person, but going forward in time we will branch into multiple people.  There is not one future self that is picked out as "really you," and it’s equally true that there is no one person constituted by all of those future individuals.  They are separate, as much as identical twins are distinct people, despite descending from a single zygote.

We might care about what happens to the versions of ourselves who live on other branches, but it’s not sensible to think of them as "us."

Carrol's point is whether, if you buy Many-Worlds, we should concern ourselves with the consequences of our decisions.  After all, if every possible outcome happens in some universe somewhere -- if everything that can happen, will happen -- then the net result of our decision-making is exactly zero.  If in this branch, you make the decision to rob a bank, and in the other, you decide not to, this is precisely the same outcome as if you decided not to in this branch and your counterpart decided to go through with the robbery in the other one.  But as Carroll points out, while it doesn't make any overall difference if you take into account every possible universe, that's a perspective none of us actually have.  Your decision in this branch does matter to you (well, at least I hope it does), and it certainly has consequences for your future in the universe you inhabit -- as well as restricting what choices are available to you for later decision-making.

If you'd like to play a little with the idea of Many-Worlds, you can turn your decision-making over to a purely quantum process via an app for iPhones called "Universe Splitter."  You ask the app a two-option question -- Carroll's example is, "Should I have pepperoni or sausage on my pizza tonight?" -- and the app sends a signal to a physics lab in Switzerland, where a photon is sent through a beam-splitter with detectors on either side.  If the photon goes to the left, you're told to go with option 1 (pepperoni), and if to the right, option 2 (sausage).  So here, as in the famous Schrödinger's Cat thought experiment, the outcome is decided by the actual collapse of an actual wave function, and if you buy Many-Worlds, you've now chopped the universe in two because of your choice of pizza toppings.

What I wonder about, though, is that after you get the results, the decision-making isn't over; you've just added one more step.  Once you get the results, you have to decide whether or not to abide by them, so once again you've split the universe (into "abide by the decision" and "don't" branches).  How many of us have put a decision up to a flip of the coin, then when the results come in, think, "That's not the outcome I wanted" and flip the coin again?  What's always bothered me about Many-Worlds is that it's an embarrassment of riches.  We're constantly engaging in situations that could go one of two or more ways, so within moments, the number of possible outcomes in the entire universe becomes essentially infinite.  Physicists tend to be (rightly) suspicious of infinities, and this by itself makes me dubious about Many-Worlds.  (I deliberately glossed over this point in Lock & Key, and implied that all human choices could be catalogued in a library -- albeit a very, very large one.  That may be the single biggest whopper I've told in any of my fiction, even though as a speculative fiction writer my stock in trade is playing fast-and-loose with the universe as it is.)

Carroll is fully aware of how bizarre the outcome of Many-Worlds is, even though (by my understanding) he appears to be in favor of that interpretation over the seemingly-arbitrary Copenhagen Interpretation.  He says -- and this quote seems as fitting a place to stop as any:


Even for the most battle-hardened quantum physicist, one must admit that this sounds ludicrous.  But it’s the most straightforward reading of our best understanding of quantum mechanics.

The question naturally arises: What should we do about it?  If the real world is truly this radically different from the world of our everyday experience, does this have any implications for how we live our lives?

Largely—no. To each individual on some branch of the wave function, life goes on just as if they lived in a single world with truly stochastic quantum events...  As counterintuitive as Many-Worlds might seem, at the end of the day it doesn’t really change how we should go through our lives.