Despite my tendency to fall into the "dubious" column with respect to most paranormal claims, I'm always appreciative of anyone who is more of a believer who nevertheless wants to see any evidence analyzed the right way.

That's my impression of The Anomalist, a website I check regularly for news of the weird.  It acts as a sort of clearinghouse for recent stories of odd or unexplained phenomena, but is really good about presenting all sides of the story -- and for calling out bogus claims as such.

Take, for example, some recent stories that appeared there, having to do with the alleged phenomenon of "haunted dolls."

For a lot of us, dolls are right up there with clowns in the "oh, hell no" department.  Their still, unresponsive faces and fixed expressions land right in the middle of the uncanny valley -- we tend to perceive a face that is human-like, but not quite human enough, as being more frightening or repellant than a face that has fewer distinctly human features.  (Think of a doll's face as compared to a teddy bear's.)  So we're already in scary territory for a good many folks.

Add to that the possibility of the doll being possessed, and you're looking at "scream like a little child and run away." 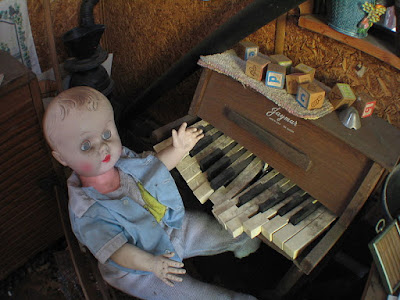 The first example is a World War II-era ventriloquist's dummy head called "Mr. Fritz" kept in a glass cabinet by its owner.  The owner started getting suspicious when he'd get up in the morning to find the cabinet door open, so he set up a camera to film it when he wasn't around.

The result, even if you're suspicious it's a fake, is pretty fucking creepy.  The glass door swings open, and then Mr. Fritz's eyes pop open -- and then his mouth moves.

After this, the owner apparently took the doll head out of the case and put it in a cabinet "secured by heavy chains." Why this was necessary, given all that happens is the door opens and the face moves, I don't know.  It's not like it had arms and legs and was walking about unassisted, or anything.

Still, I understand the apprehension.  Skeptic though I am, I don't think I'd want to sleep in the same room as that thing, heavy chains or no.

Then we have a British doll named Scarlet, who has been recorded using an "Electronic Voice Phenomena" (EVP) recorder -- and what she supposedly says indicates she should have her prim little porcelain mouth washed out with soap.

In a video of the doll, we get to hear playback of the alleged EVP.  Not only does she say her owner's name (Linzi), she says such things as "fuck off," "you're fucked," "shut the fuck up," and "fuck this."

So apparently Scarlet is even more fond of the f-word than I am, and that's saying something.

Anyhow, I listened to the recording several times -- and I'm just not hearing it.  I could barely make out "Linzi," but all of the alleged obscenities just sounded like white noise to me.  And that's the problem; as is pointed out in The Anomalist, there's a good explanation for a great many alleged EVP claims, and that's apophenia.  The human mind is a pattern-finding machine, which means that sometimes we'll see patterns when there's nothing there but chaos.  (You can think of our tendency to see faces -- pareidolia -- as a special case of apophenia.)

With Scarlet, people are already primed to hear something meaningful, so the static pops, clicks, and hums the EVP recorder plays back are interpreted with this bias.  Especially when we already know what the doll allegedly said -- all of which are listed right there in the article.

Put simply, you can't miss it when I tell you what's there.

The Anomalist provides a link to an article in The Skeptical Inquirer about this very tendency -- looking at particular cases of EVP claims and analyzing why they're probably nothing more than our tendency to impose order on chaos.

So unlike a lot of sensationalized sites about alleged paranormal phenomena, I can hold up The Anomalist as a place that has the exact right approach.  I'm probably still a bit more dubious than the site owners are, but by and large, we both have the same touchstone for accepting a claim -- logic and evidence.

And a bit of healthy skepticism about humanity's capacity both for getting things wrong... and for engaging in fakery.