Before I get into the subject of today's post, I want all of you to watch this two-minute video, entitled "Whodunnit?"

How many of you were successful?  I know I wasn't.  I've watched it since about a dozen times, usually in the context of my neuroscience class when we were studying perception, and even knowing what was going on I still didn't see it.  (Yes, I'm being deliberately oblique because there are probably some of you who haven't watched the video.  *stern glare*)

This comes up because of some recent research that appeared in Nature Communications about why it is we get tricked so easily, or (which amounts to the same thing) miss something happening right in front of our eyes.  In "Spatial Suppression Promotes Rapid Figure-Ground Segmentation of Moving Objects," a team made up of Duje Tadin, Woon Ju Park, Kevin C. Dieter, and Michael D. Melnick (of the University of Rochester) and Joseph S. Lappin and Randolph Blake (of Vanderbilt University) describe a fascinating experiment they conducted that shows how when we look at something, our brains are actively suppressing parts of it we've (subconsciously) decided are unimportant.


Segregation of objects from their backgrounds is one of vision’s most important tasks.  This essential step in visual processing, termed figure-ground segmentation, has fascinated neuroscientists and psychologists since the early days of Gestalt psychology.  Visual motion is an especially rich source of information for rapid, effective object segregation.  A stealthy animal cloaked by camouflage immediately loses its invisibility once it begins moving, just as does a friend you’re trying to spot, waving her arms amongst a bustling crowd at the arrival terminal of an airport.  While seemingly effortless, visual segregation of moving objects invokes a challenging problem that is ubiquitous across sensory and cognitive domains: balancing competing demands between processes that discriminate and those that integrate and generalize.  Figure-ground segmentation of moving objects, by definition, requires highlighting of local variations in velocity signals.  This, however, is in conflict with integrative processes necessitated by local motion signals that are often noisy and/or ambiguous.  Achieving an appropriate and adaptive balance between these two competing demands is a key requirement for efficient segregation of moving objects.

The most fascinating part of the research was that they found you can get better at doing this -- but only at the expense of getting worse at perceiving other things.  They tested people's ability to detect a small moving object against a moving background, and found most people were lousy at it.  After five weeks of training, though, they got better...

... but not because they'd gotten better at seeing the small moving object.  Tested by itself, that didn't change.  What changed was they got worse at seeing when the background was moving.  Their brains had decided the background's movement was unimportant, so they simply ignored it.

"In some sense, their brain discarded information it was able to process only five weeks ago," lead author Duje Tadin said in an interview in Quanta.  "Before attention gets to do its job, there’s already a lot of pruning of information.  For motion perception, that pruning has to happen automatically because it needs to be done very quickly." 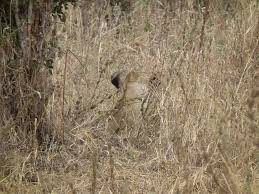 All of this reinforces once again how generally inaccurate our sensory-integrative systems are.  Oh, they work well enough; they had to in order to be selected for evolutionarily.  But a gain of efficiency, and its subsequent gain in selective fitness, means ignoring as much (or more) than you're actually observing.  Which is why we so often find ourselves in situations where we and our friends relate a completely different version of events we both participated in -- and why, in fact, there are probably times we're both right, at least partly.  We're just remembering different pieces of what we saw and heard -- and misremembering other pieces different ways.

So "I know it happened that way, I saw it" is a big overstatement.  Think about that next time you hear about a court case where a defendant's fate depends on eyewitness testimony.  It may be the highest standard in a court of law -- but from a biological perspective, it's on pretty thin ice.