The week after I retired I made the mistake of saying to my wife, "I don't know what I'm going to do with all of my free time!"

Two days later we found out we had to have major foundation work done on our house.  I do mean major; erosion and settling on one corner was causing the slab to twist, and if we didn't do something, we were going to have our slab -- and almost certainly our walls -- crack catastrophically.

So yeah.  Me and my big mouth.  It's times like this I have a hard time maintaining my status as Non-Superstitious Guy.

The foundation work required that we more or less gut our formerly-finished basement.  We were already planning on redoing it, just not this completely or this precipitously.  It could be a nice space -- it's got a walk-out (we're built on a hill, which is part of what caused the problem in the first place) and with some messing about it could be a den or even a rental apartment, now that we're empty nesters and it's just me and Carol in this big house. 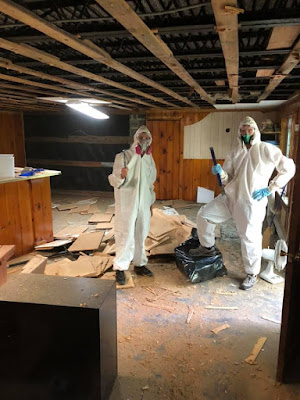 Me and my son working on demolition.  You can probably see the amazing family resemblance between us.

In any case, this all comes up because of a paper that appeared last week in Nature Communications  about why we perceive some sounds as unpleasant (such as shop vacs, reciprocating saws, dehumidifiers, and air filters -- all of which we had going at once down there).  And it turns out that it's not just the volume (amplitude) of the sound waves.

In "The Rough Sound of Salience Enhances Aversion Through Neural Synchronisation," by Luc H. Arnal, Andreas Kleinschmidt, Laurent Spinelli, Anne-Lise Giraud, and Pierre Mégevand of the University of Geneva, we find that the degree of perceived unpleasantness of a sound has to do with repeated peaks in "fast repetitive modulations" in the sound.  Put simply, there are two kinds of frequency most sounds have: the fundamental frequency of the tone, which we perceive as its pitch; and the rise and fall of overall loudness.  And what the researchers discovered is when that second frequency is between 30 and 150 hertz, we find it really unpleasant.  (One hertz is one vibration per second; so even 30 hertz is fast enough that we're not consciously aware of it as a repetitive noise.)

Apparently sounds in that range cause our neurons to synchronize at that frequency, heightening awareness and making them difficult to ignore.  The researchers suspect that it may be an evolved response because those sorts of noises may signal danger, but that's speculation at this point.


Fast repetitive modulations produce “temporally salient” flickering percepts (e.g. strobe lights, vibrators, and alarm sounds), which efficiently capture attention, generally induce rough and unpleasant sensations, and elicit avoidance.  Despite the high ecological relevance of such flickering stimuli, there is to our knowledge no existing operational definition of temporal salience and only limited experimental work accounting for the intriguing aversive sensation such auditory textures produce and the reactions they trigger.  Here, we introduce and explore the notion of temporal salience and investigate its behavioural and neural underpinnings.  Of note, although salience may not systematically result in aversive percept, we argue that in this specific context, temporal salience—owing to the imperative effect of exogenously saturating perceptual systems in time—constitutes a valid proxy of aversion.  Therefore, we hypothesise that providing fast, but still discretisable and perceptible, temporally salient acoustic cues should enhance neural processing and ensuing aversive sensation.

This discovery led to some surprising connections.  "These sounds solicit the amygdala, hippocampus and insula in particular, all areas related to salience, aversion and pain.  This explains why participants experienced them as being unbearable," said Luc Arnal, who was the paper's lead author.   "This is the first time that sounds between 40 and 80 hertz have been shown to mobilise these neural networks, although the frequencies have been used for a long time in alarm systems...  We now understand at last why the brain can't ignore these sounds.  Something particular happens at these frequencies, and there are also many illnesses that show atypical brain responses to sounds at 40 Hz.  These include Alzheimer's, autism and schizophrenia."

Which is unexpected and startling.  What is happening in the brain at those frequencies -- and how does it connect with overall mental functioning?  Does schizophrenia (for example) involve some sort of "brain noise" that is at a frequency that the sufferer can't ignore?

In any case, it's a fascinating piece of research, and on a more banal level explains why I find that shop vac so damned annoying.  At least we've got the demolition done, so I won't have any more huge messes to clean up.

Unless the universe is listening and causes some catastrophic upheaval in another part of our house.  You never know.  Just because I'm not superstitious doesn't mean I can't jinx myself.