Pulled from the fires

Note bene: If you haven't read Umberto Eco's brilliant medieval murder mystery The Name of the Rose and are planning to, be aware that the next couple of paragraphs contain spoilers.  If you'd like to read the book and don't want to know the solution, skip down to the stars!

One of the most devastating scenes in The Name of the Rose happens right near the end, when the main characters, the Sherlock-Holmes-like Brother William of Baskerville and his friend and pupil, Brother Adso of Melk, confront the murderous old religious nutter Brother Jorge of Burgos in the place that is the center of all the action -- the labyrinthine Library at the top of the Aedificium of the (unnamed) monastery where the story takes place.  The Library was built not to collect and disperse knowledge but to hide it; Librarian after Librarian voraciously hoarded manuscripts of all sorts but always wanted to be in control of who got to read what, feeling that some books were not fit reading material for anyone but the most holy.

Brother Jorge himself was the Librarian before he had to resign the position because of his failing eyesight, but still kept a tight rein over who got to read what, acting through his proxy (and the nominal Librarian after Jorge retired), Brother Malachi of Hildesheim.  And when Jorge discovered that there was a copy of a particular manuscript in the Library -- the long-lost second volume of Aristotle's Poetics -- that implied that the main purpose of living was not prayer and self-mortification but laughter and joy, he was willing to go to any length to stop people from finding out about it and (in his mind) destroying the solemn foundation of the Church itself.  In the end, he sets fire to the Library, destroying all of the thousands of irreplaceable manuscripts (and himself in the process) rather than let Brother William get his hands on the copy and make others aware of its existence.

All through the book, the Library was built up to mythic proportions.  Eco recreates in us a sense of what it must have been like to witness the burning of the Great Library of Alexandria, an event that it pains me to think about even now.  But now, some scientists have found a way to salvage at least some manuscripts thought lost to fire forever.

Everyone's familiar with the devastation Mount Vesuvius wrought on the cities of Pompeii and Herculaneum on the 29th of August in the year 79 C.E.  If you haven't already done so, you should watch this amazing, nine-minute-long animation that puts you right in the middle of the eruption -- something that makes me very, very thankful I'm in a tectonically benign part of the world.

The main explosion of the volcano occurred at about one o'clock in the afternoon (we have a good account of the details from the historian Pliny the Younger, who witnessed the cataclysm and survived, and his uncle Pliny the Elder -- who wasn't so lucky).  The blowout vaporized a good chunk of the top of the mountain and triggered a pyroclastic surge that geologists estimate was around 300 C and traveling at over 100 kilometers an hour.  Anyone who had survived the previous rains of ash and rock that morning was flash-fried, and then covered up by 25 meters of volcanic ash deposited in the six hours that followed.

Some artifacts survived.  Buildings (although damaged by the pyroclastic flow and the concomitant earthquakes) were found preserved when excavations began in earnest in the eighteenth century.  Tiles and paintings were remarkably unscathed, and there are pieces of art from the ruined city that look like they were created yesterday.  Rather horrifyingly, there are casts and molds of a good many of the victims, who were cooked by the blast, encased in ash, and then once their bodies decayed, the cavity was filled with minerals seeping in, leaving bizarre human shapes still in the contorted positions where they fell.

Anything else made of organic matter, though, was pretty well incinerated.  Any bits of charred wood that survived rotted away within a few years after the eruption.  Even less likely to survive were parchments -- written records -- although the carbonized remains of almost two thousand scrolls were found when the city of Herculaneum was excavated.

Tantalizing to think there still could be readable information there, to wonder what lost treasures of literature and history those blackened cylinders might be.  But there was no way to see if anything was still there other than ash, nor a way to unroll them and find out without having them crumble to powder...

Brent Seales of the University of Kentucky, working with a team made up of Jens Dopke, Francoise Berard, Christy Chapman, Robert Atwood, and Thomas Connolley, has pioneered a technique that hinges on the fact that a lot of the inks used by the ancients had traces of lead and other heavy metals which are still present in the tracery of script on the burned fragments.  By taking the scrolls -- without unwrapping them and causing further damage -- and using a targeted beam of x-rays, scientists can see inside them and possibly piece together what the text actually said. 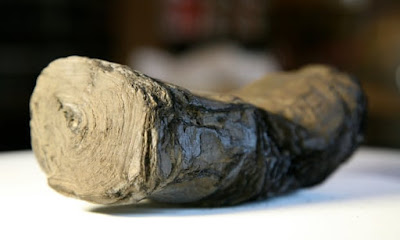 One of the scrolls charred by Vesuvius and recovered from Herculaneum

"A new historical work by Seneca the Elder was discovered among the unidentified Herculaneum papyri only last year, thus showing what uncontemplated rarities remain to be discovered there," said Dirk Obbink of the University of Oxford, who has worked with the team to train the algorithm to read the burned scrolls using parchments that have already been (at least partially) deciphered.  "It's my hope that the scrolls might even contain lost works, such as poems by Sappho or the treatise Mark Antony wrote on his own drunkenness.  I would very much like to be able to read that one."

As would a lot of us.  The idea that something thought lost forever might be restored is thrilling, and the work Seales's team is doing is groundbreaking.  Until we develop time travel and go back to save the manuscripts from the Library of Alexandria, it's our best chance to find new primary sources from the ancients -- something that historians, and bibliophiles like myself, have dreamed about for years.

Posted by Gordon Bonnet at 4:39 AM