I get a lot of odd links sent to me, which I suppose I should expect, given that strange claims are kind of our stock-in-trade here at Skeptophilia headquarters.  I hasten to add that I really appreciate the effort my readers make to keep me informed as to what's going on in the Wide World of Weirdness, so as the talk show hosts used to say, "Keep those cards and letters comin'."

In the last couple of days I was sent links to three stories (one of them was sent to me four times), so I thought I should let my readers know what's going on in ParanormalLand.

First, we have a claim out of Mayfield, County Cork, Ireland, that a ghost has been spotted haunting a service station.

Twice, apparently.  The first time was caught on closed-circuit camera from inside the service station convenience store, where the ghost tossed about a package of cookies and a basket of bananas; the second time was on the CCTV outside the station.  The videos are both on the link provided.  The first one was pretty obvious, although I maintain that someone trying to create a hoopla could easily have accomplished the whole thing using a piece of string tied to the cookie package and banana basket.  As far as the second one goes, I'm... unimpressed.  I've watched it through twice, and frankly, I don't see a damned thing.  There's some repeated blurring, but that looks to me like water on the camera lens (this is southwestern Ireland, after all, so it was probably raining), but nothing that looks even remotely like a "figure of a woman."

That hasn't stopped people from acting like it's incontrovertible proof of the existence of the spirit world.

"I started Wednesday morning and saw biscuits on the ground and thought nothing of it," said shop owner Tom O'Flynn.  "Then I went around and saw a large fruit bowl on the ground so we checked CCTV and it looks as though it was pushed off.  I would have been very skeptical with things like this, but I looked at all angles and I'm at a loss with this...  This was at 12:30 at night and both incidents happened about 10 minutes part.  The bowl was full of bananas, oranges, and apples, and it got pulled over and there was no one around...  Jesus, when I saw it my heart kind of pounded.  I didn't know what to make of it, I looked at all angles and couldn't get my head around it."

Suffice it to say I wasn't quite as taken aback, but then, I wasn't there when it happened.

Then there's an investigation of a "haunted well" near Basildon, Essex, England, where people allegedly burst into tears and want to kill each other.

Called Cash's Well, the place is named after one Edwin Cash, who true to his name tried to make some quick money off "healing waters" from the site in the early twentieth century, but went bankrupt when people reported the well water making them sick.  Since then, the area around the well has gotten the reputation for being haunted (aficionados of ghosts claim that's why the water had the ill effects it did -- it was cursed, or something).  A recent investigation resulted in people confirming feeling wonky when they got near the well -- several reported feeling cold, "goosebumpy," or sad, and one reported they had unexplained violent urges.

The group worked with "spirit guides," who fulfilled their duties to the letter when the investigators got lost looking for the well, and one of the guides said, "Turn left."

Being a rather rabid fan of Doctor Who, I'm not sure I would have responded that that positively. 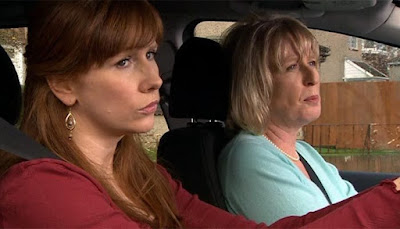 Anyhow, I was intrigued until I heard the explanation given by Russell (no last name provided), of Essex Ghost Hunters, about the nature of the phenomenon.  "We've all got an aura, which is scientifically proven," Russell told a reporter for Essex Online.  "We've all got a two-inch energy bubble that surrounds us all the time.   When spirits come close they will interact with that bubble, something has moved your aura and it's wobbling.  The two energies pull apart and that's what causes the vibration."

Last, there's the link that's been sent to me (as of this writing) four times, about a rather gruesome situation on a ranch in eastern Oregon, where five cattle have been completely exsanguinated -- and had specific body parts removed -- most bizarrely, leaving no evidence in the way of tire tracks, footprints, or other marks.

The five bulls were all found this summer, missing their tongues and testicles, and -- according to rancher Colby Marshall -- "without one drop of blood."  This is a major loss to the ranch, so it's crazy to assume that the ranchers themselves had anything to do with it; unlike the ghost in the service station, they've got nothing to gain from fifteen minutes of fame, and (again, according to Marshall) lost thirty thousand dollars from the bulls' deaths.

The Harney County Sheriff's Office has been looking into the incident, and Silvies Valley Ranch -- owner of the dead cattle -- are offering a $25,000 reward for anyone who can provide information leading to the arrest and conviction of the perpetrator(s).  But the whole thing has the investigators baffled, because it's not like accomplishing this would have been easy.  "[The area is] rugged," Marshall said.  "I mean this is the frontier.  If some person, or persons, has the ability to take down a 2,000-pound range bull, you know, it's not inconceivable that they wouldn't have a lot of problems dealing with a 180-pound cowboy."

So employees of the ranch have been instructed to always go out (at least) in pairs, and never to leave the ranch building unarmed.

Of course, given the nature of the crime, the whole "aliens abducting cattle" thing has come up, but there's no evidence of that.  The problem is, there's no evidence at all.  Andie Davis, who with her husband operates a ranch nearby (and who two years also had cattle die under mysterious circumstances), found the absence of marks the most perplexing thing.

"Everything you do leaves tracks," Davis said.

So of the three stories, this is the one I find the oddest and the least explicable.  I'm still not going with aliens -- not without more to go on -- but I have to admit there's no other ready explanation.  Unlike flying cookies and goosebumpy auras, at least this story has some evidence that it's hard to explain away as a hoax or confirmation bias.