Most of us can vouch from first-hand experience that we don't think straight when we're sleep-deprived.

I used to be a terrible insomniac -- I can only say "used to" because part of it was that I had obstructive sleep apnea, despite having exactly zero of the usual predisposing risk factors.  (Turns out I have a "narrow tracheal opening," which was closing up -- get this -- twenty-three times an hour.  No wonder I wasn't sleeping well.)  In any case, I sleep better now because I'm on a CPAP machine, which keeps me breathing, especially when I lie on my back.

But that hasn't fixed the fact that I'm a nervous, twitchy type, and usually my brain is going at Warp 6, often about bizarre topics.  I remember once, in the days before Google, losing nearly an entire night's sleep trying to remember the name of the Third Musketeer.  (Athos, Porthos, and... so you aren't kept up by it, his name was Aramis.)

Because that's obviously a critical enough piece of information that my brain has to keep me awake over it.  Can't wait till the morning, obviously.

Then there are earworms, little snippets of music that keep running around and around AND AROUND AND AROUND in your head, until you'd be willing to use anything to excise it, up to and including a reciprocating saw.  Like the time a couple of weeks ago my brain thought it would be fun at two in the morning to keep singing the same phrase from Manfred Mann's song "Blinded by the Light" eight hundred times in a row.  For the record, I hated that song before, and now I hate it more.  Also for the record, no one is ever going to convince me that he's not singing, "wrapped up like a douche, another runner in the night."

So my point is, we all know that sleep deprivation is harmful, but it's much harder to determine exactly why that is.  But we've just gotten a new window on the question with two studies that appeared in Science this week suggesting that what's happening when we sleep is that we're resetting our circadian rhythms -- more specifically, the chemicals controlling it -- and when that doesn't happen, it seriously impairs our brain's function in a variety of ways. 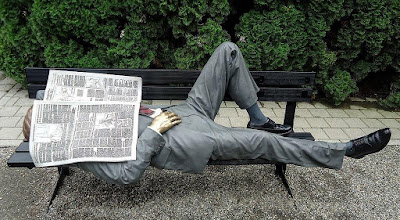 [Image licensed under the Creative Commons Sculpture of a Sleeping Man-New Jersey https://commons.wikimedia.org/wiki/User:Tomwsulcer]

In the first, conducted by a team at the University of Zurich led by neuroscientist Sara Noya, we learn that the production of certain pieces of messenger RNA -- the first step in the production of proteins of all sorts, and therefore a good measure of gene activity -- is coordinated by the timing of sleep, and thrown off severely when a person is sleep deprived.  The authors write:


[We found that] that forebrain synaptic transcript accumulation [i.e. mRNAs] shows overwhelmingly daily rhythms, with two-thirds of synaptic transcripts showing time-of-day–dependent abundance independent of oscillations in the soma.  These transcripts formed two sharp temporal and functional clusters, with transcripts preceding dawn related to metabolism and translation and those anticipating dusk related to synaptic transmission.  Characterization of the synaptic proteome around the clock demonstrates the functional relevance of temporal gating for synaptic processes and energy homeostasis.  Unexpectedly, sleep deprivation completely abolished proteome but not transcript oscillations.  Altogether, the emerging picture is one of a circadian anticipation of messenger RNA needs in the synapse followed by translation as demanded by sleep-wake cycles.

In the second, written by a team led by Franziska Brüning of Ludwig Maximilian University of Munich, they found that sleep deprivation had a much larger effect on these chemical circadian rhythms than anyone could have anticipated:


The circadian clock drives daily changes of physiology, including sleep-wake cycles, through regulation of transcription, protein abundance, and function.  Circadian phosphorylation [a process associated with energy activation of proteins] controls cellular processes in peripheral organs, but little is known about its role in brain function and synaptic activity...  Half of the synaptic phosphoproteins [we studied], including numerous kinases, had large-amplitude rhythms peaking at rest-activity and activity-rest transitions.  Bioinformatic analyses revealed global temporal control of synaptic function through phosphorylation, including synaptic transmission, cytoskeleton reorganization, and excitatory/inhibitory balance.  Sleep deprivation abolished 98% of all phosphorylation cycles in synaptoneurosomes, indicating that sleep-wake cycles rather than circadian signals are main drivers of synaptic phosphorylation, responding to both sleep and wake pressures.

All of which makes it even more unfortunate that we live in a society where the various pressures and distractions make it difficult to get a good night's sleep.  In fact, I've heard people doing what amounts to bragging about not sleeping, as if that was some sort of badge of honor signifying how hard they work or what kind of stresses they're dealing with.

The bottom line, here, is that there is a dramatic connection between not only adequate sleep every night and normal brain function, but between sleep and general health.  Not that it's easy, I get that.  We've all got a lot to deal with in our lives that can interfere with sleeping.  But my point is that we need to start prioritizing sleep as much as we prioritize such healthful habits as exercise and good diet.  Wanting to sleep more isn't laziness.  It's doing what it takes so that when we are awake, we're function at our optimum.

So, on that note, I think I'm gonna take a nap.  If I can stop rerunning brilliant and insightful lyrics like, "Little early birdie came by in his curly whirly, and asked me if I needed a ride" over and over.