I remember when I took Quantum Physics as an undergraduate, many, many (many) years ago, my professor, Dr. John Matese, was fairly disparaging about the naming of the (then newly-discovered) quarks.  Up, down, top, bottom, strange, and charm, he said, were (1) misleading, because the names sound like they tell you something about the particle but don't, and (2) were cutesie, giving laypeople an impression of scientists as being "whimsical."

He said the last word in tones that left us in no doubt about his opinion of whimsy.

At least one of those names is apt, though, and that's "strange."  There's a hypothesis going around -- among serious physicists, I hasten to state, not among the whimsical -- that under sufficient pressure, matter can form which contains strange quarks.  (Ordinary matter is formed entirely of the two lightest-mass quarks, up and down.)  This "strange matter" has the property of being able to convert surrounding matter to strange matter, a little like "Ice-Nine" in Kurt Vonnegut's Cat's Cradle.  And if that's not weird enough, if a hypothesis pieced together from papers by A. R. Bodmer in 1971 and Edward Witten in 1984 is correct, it might be that the ordinary matter you see around us is the fluke; it's "metastable," meaning given the right conditions it could convert to the more stable strange matter, and our regular old atoms and molecules would condense into droplets... 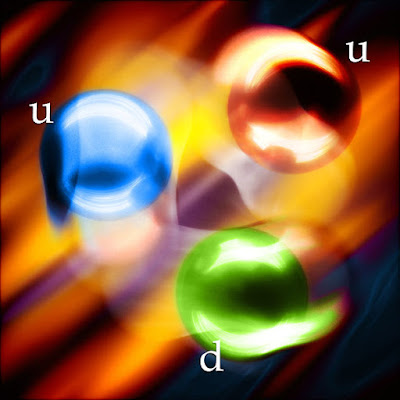 A paper published in the Journal of Astrophysics last week pushes the "strange matter hypothesis" a step further by suggesting that some of the astronomical objects we see may be strange, rather than ordinary, matter.  One possible place this stuff could live is the interior of neutron stars -- up till now thought to be extremely dense stuff, but the usual sort.  A team made up of physicists Abudushataer Kuerban, Jin-Jun Geng, Yong-Feng Huang, Hong-Shi Zong, and Hang Gong, of Nanjing University, has suggested that such bizarre matter may not just be confined to the cores of neutron stars -- it may be that there are whole planets of the stuff orbiting pulsars and even white dwarfs.


Since the true ground state of the hadrons may be strange quark matter (SQM), pulsars may actually be strange stars rather than neutron stars.  According to this SQM hypothesis, strange planets can also stably exist.  The density of normal matter planets can hardly be higher than 30 g cm−3. As a result, they will be tidally disrupted when its orbital radius is less than ∼5.6×10^10 cm, or when the orbital period (Porb) is less than ∼6100s.  On the contrary, a strange planet can safely survive even when it is very close to the host, due to its high density.  The feature can help us identify SQM objects.  In this study, we have tried to search for SQM objects among close-in exoplanets orbiting around pulsars. Encouragingly, it is found that four pulsar planets completely meet the criteria... and are thus good candidates for SQM planets.  The orbital periods of two other planets are only slightly higher than the criteria.  They could be regarded as potential candidates.  Additionally, we find that the periods of five white dwarf planets are less than 0.1 days.  We argue that they might also be SQM planets.  It is further found that the persistent gravitational wave emissions from at least three of these close-in planetary systems are detectable to LISA [the Laser Interferometer Space Antenna].  More encouragingly, the advanced LIGO [the Laser Interferometer Gravitational-Wave Observatory] and Einstein Telescope are able to detect the gravitational wave bursts produced by the merger events of such SQM planetary systems, which will provide a unique test for the SQM hypothesis.

These planets would be, in a word, strange.  Their densities aren't just "high," as the authors state; they're "really fucking high."  (I realize that descriptor might not pass the editors for the Journal of Astrophysics, but I maintain that it's more accurate.)  For purposes of comparison, gold -- one of the densest familiar substances -- has a density of 19.3 grams per cubic centimeter.  The material making up a strange planet is predicted to be on the order of 400 trillion grams per cubic centimeter.

A planet with this density would have a gravitational pull so intense that taking one step up onto a hill a centimeter high would require more energy than leaping from sea level to the top of Mount Everest in one bound.

Suffice it to say that walking about on a strange planet would be pretty much out of the question.

Of course, the idea that the planets analyzed by Kuerban et al. are made of strange matter may not turn out to bear up under further scrutiny.  But the fact that it's even possible we've located some large chunks of such an exotic material is pretty fantastic.  Whether it pans out or no, I think we can all agree on one thing:

The universe is a very strange place.