Halloween is this Thursday, so you know what that means: pumpkin decorations and skeletons and ghosts everywhere, candy of all kinds for sale in the stores, people excitedly coming up with creative costumes for parties and trick-or-treating, and the extremely religious telling people that indulging in any of the above will doom them for all eternity.

This time the harbinger of fire and brimstone is none other than Ken Ham, who runs Answers in Genesis and is most famous for "Ark Encounter," a museum (to use the term loosely) in Grant County, Kentucky that has as its mission convincing people that a book documenting the beliefs of a handful of Bronze-Age sheep herders is the best resource we have for understanding science.  According to Ham, here's the way it all went down:
But other than that, it makes complete sense. 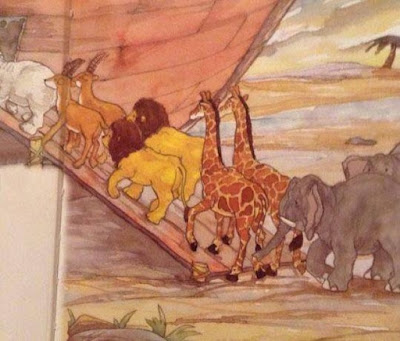 Looks to me like there's an issue here with the lions.  Maybe they're gay lions, I dunno.  But even though I applaud them for coming out of the closet, it would still be problematic with respect to rebuilding the lion population, post-Flood.

So anyway, we're already on shaky ground, reality-wise, with Ken Ham weighing in on pretty much anything.  That didn't stop him from giving the devout some suggestions on how to deal with the upcoming Day of Evil.  "One way you can make the most of this once-a-year opportunity is by giving gospel tracts to children and/or their parents," Ham said.

Yeah, that'll make you popular in your neighborhood.

He also recommended buying (from his online store -- of course) some "million-dollar bills" printed with a picture of a T. rex on one side and a picture of the Ark on the other, with edifying messages such as:

Now wait a moment.  "Legally?"  What does that even mean in this context?  Isn't the whole point of the Bible that God can pretty much do whatever he damn well pleases, and we humans just have to suck it up and deal?  Seems like if God wanted to forgive us, he would have just done it, and not gone through the whole nasty crucifixion business.  So that "Jesus paid our fine" thing has never made a scrap of sense to me.  It's kind of like if your brother pissed your dad off, and your dad spanked you.  Then he says to your brother, "You're forgiven now."  When you understandably object to all of this, your dad says, "Well, I had to spank someone, right?"

In any case, I wouldn't throw away your bags full of Snickers bars and replace them with gospel tracts.  For one thing, it seems like a good way to get your house egged.  Second, warning trick-or-treaters about the dangers of lust seems to me to be targeting the wrong audience, even if you think lustful thoughts are evil, which I don't because that would mean that 99% of humanity is destined for eternal hellfire.

So have fun with your costumes and scary decorations and whatnot.  Honestly, it seems a lot more sensible than all the stuff Ken Ham is trying to get you to believe.  And that's even if you account for the gay lion couple.