If we are ever lucky enough to contact intelligent extraterrestrial life, one of the difficulties will be communicating with them -- or even understanding what they say (whatever form that takes) as intelligent communication.

The problems with such contact, between not just different cultures but different species, were addressed in one of the most iconic episodes of Star Trek: The Next Generation -- "Darmok."  (If you don't believe me about its iconic status, go up to any fan of science fiction and say, "Darmok and Jalad at Tanagra."  I can nearly guarantee you that they will respond, "Shaka, when the walls fell."  Or possibly "Gilgamesh and Enkidu at Uruk."  And if they say the latter, they will follow it up by bursting into tears.  Amirite, Trek fans?) 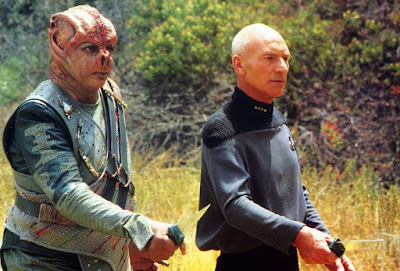 The Tamarians, it turns out, always speak in myth-based metaphor; the classic phrase "Darmok and Jalad at Tanagra" is from a story of their culture and represents two people coming together to fight a common foe.  If you don't know the myths, though, the phrase makes no sense -- just as Deanna Troi points out, that if you know Shakespeare, "Juliet on the balcony" might represent doomed love, but if you don't know the play, it's completely without meaning.

Much as I love this episode -- and, like most TNG fans, ugly cry at the end of it -- as a linguist, it's always struck me as a little off.  It's hard to see how a race that speaks entirely in metaphor could become technological.  If to say, "Hand me the torque wrench" you had to come up with some kind of arcane analogy from a folk tale, fashioning anything more complicated than a slingshot would be pretty much out of the question.

A more realistic take on the alien communication thing (but in my opinion, not nearly as good a story) was the 2016 movie Arrival, in which the alien race "speaks" by drawing patterns in the air that are a little reminiscent of Circular Gallifreyan from Doctor Who.  A linguist (played by Amy Adams) is hired to decipher what they're trying to say, and head off a war -- the typical human assumption being, "If I don't know your motives, they must be bad."  The cool thing about this scenario is that the movie's creators came up with a mode of communication that's really alien, that shares essentially nothing with human speech (and damn little with human writing).

This comes up because of a paper by Christine Cuskley in Nature that looks at the human capacity for elucidating patterns, both from spoken or written language and from stimuli that aren't generally considered language at all (such as the tones of a slide whistle), when we have no referent at all for meaning.   Repeated experiments using a variety of different types of communication show that we're pretty good at abstracting and generalizing patterns from what we're given.  One example of the many given -- and you really should read the original paper, because it's freakin' cool -- is that in a test where people are given words for geometric shapes of different types, colors, and movements, within short order the test subjects figured out that if the word ended with the suffix -plo it designated a shape that was bouncing.


A cornerstone of experimental studies in language evolution has been iterated artificial language learning: studies where participants learn of artificial ‘alien’ languages, and the product of their learning is then passed onto other participants successively.  Results over the last decade show that some defining features of human language can arise under these experimental conditions, which use iteration to simulate processes of cultural transmission...  These results have implications for how forms and modalities might constrain language systems, and demonstrate how the use of truly novel alien forms might be extended to address new questions in cultural and linguistic evolution.

All of which makes me hopeful that if we ever are confronted with something like the scenario in Arrival, we might actually have some hope of figuring out what the aliens are saying.  Can you imagine how exciting that would be?  Not just deciphering a non-human language -- something that gives linguistics geeks like me multiple orgasms -- but being able to find out what goes on in the brains (or whatever equivalent they have) of a species that shares no commonality with terrestrial biology at all?

Man, if we find it hard to conceive how people from other cultures on Earth think, this would stretch our capacity to the limit.  And it would knock us even further off our idea, which persists despite everything science has discovered, that humans are somehow special creations, and our thoughts, needs, desires, and hopes somehow lie at the very center of the universe.

Which is all to the good.  Our species could use a little more humility.  Maybe it'd allow us to take our place in the cosmos with a little more grace.

Who knows?  Maybe we'd even be able to say, "Picard and Dathon at El-Adrel."  And mean it.