When I was in Calculus II, my professor, Dr. Harvey Pousson, blew all our minds.

You wouldn't think there'd be anything in a calculus class that would have that effect on a bunch of restless college sophomores at eight in the morning.  But this did, especially in the deft hands of Dr. Pousson, who remains amongst the top three best teachers I've ever had.  He explained this with his usual insight, skill, and subtle wit, watching us with an impish grin as he saw the implications sink in.

The problem had to do with volumes and surface areas.  Without getting too technical, Dr. Pousson asked us the following question.  If you take the graph of y = 1/x: 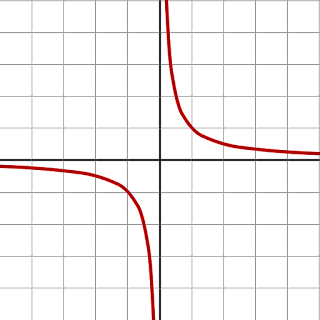 And rotate it around the y-axis (the vertical bold line), you get a pair of funnel-shapes.  Not too hard to visualize.  The question is: what are the volume and surface area of the funnels?

Well, calculating volumes and surface areas is pretty much the point of integral calculus, so it's not such a hard problem.  One issue, though, is that the tapered end of the funnel goes on forever; the red curves never strike either the x or y-axis (something mathematicians call "asymptotic").  But calc students never let a little thing like infinity stand in the way, and in any case, the formulas involved can handle that with no problem, so we started crunching through the math to find the answer.

And one by one, each of us stopped, frowning and staring at our papers, thinking, "Wait..."

Because the shapes end up having an infinite surface area (not so surprising given that the tapered end gets narrower and narrower, but goes on forever) -- but they have a finite volume.

I blurted out, "So you could fill it with paint but you couldn't paint its surface?"

We forthwith nicknamed the thing "Pousson's Paint Can."  I only found out much later that the bizarre paradox of this shape was noted hundreds of years ago, and it was christened "Gabriel's Horn" by seventeenth-century Italian physicist and mathematician Evangelista Torricelli, who figured it was a good shape for the horn blown by the Archangel Gabriel on Judgment Day.

There are a lot of math-phobes out there, which is a shame, because you find out some weird and wonderful stuff studying mathematics.  I largely blame the educational system for this -- I was lucky enough to have a string of fantastic, gifted elementary and middle school math teachers who encouraged us to play with numbers and figure out how it all worked, and I came out loving math and appreciating the cool and unexpected bits of the subject.  It's a pity, though, that a lot of people have the opposite experience.  Which, unfortunately, is what happened with me in my elementary and middle school social studies and English classes -- with predictable results.

So math has its cool bits, even if you weren't lucky enough to learn about 'em in school.  Here are some short versions of other odd mathematical twists that your math teachers may not have told you about.  Even you math-phobes -- try these on for size.

A fractal is a shape that is "self-similar;" if you take a small piece of it, and magnify it, it looks just like the original shape did.  One of the first fractals I ran into was the Koch Snowflake, invented by Swedish mathematician Helge von Koch, which came from playing around with triangles.  You take an equilateral triangle, divide each of its sides into three equal pieces, then take the middle one and convert it into a (smaller) equilateral triangle.  Repeat.  Here's a diagram with the first four levels: 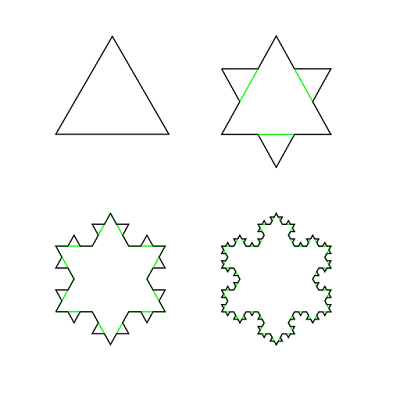 And with Koch's Snowflake -- similar to Pousson's Paint Can, but for different reasons -- we end up with a shape that has an infinite perimeter but a finite area.

Fractals also result in some really unexpected patterns coming out of perfectly ordinary processes.  If you have eight minutes and want your mind completely blown, check out how what seems like a completely random dice-throwing protocol generates a bizarre fractal shape called the Sierpinski Triangle.  (And no, I don't know why this works, so don't ask.  Or, more accurately, ask an actual mathematician, who won't just give you what I would, which is a silly grin and a shrug of the shoulders.)

In 1852, a man named Francis Guthrie was coloring in a map of the counties of England, and noticed that he could do the entire map, leaving no two adjacent counties the same color, using only four different colors.  Guthrie wondered if that was true of all maps.

Turns out it is -- something that wasn't proven for sure until 1976.

Oh, but if you're talking about a map printed onto a Möbius Strip, it takes six colors.  A map printed on a torus (donut) would take seven.

Once again, I don't have the first clue why.  Probably explaining how it took almost a hundred years to prove.  But it's still pretty freakin' cool.

In the 1950s, Dutch mathematician Luitzen Brouwer came up with an idea that -- as bizarre as it is -- has been proven true.  Take two identical maps of Scotland.  Deform one any way you want to -- shrink it, expand it, rotate it, crumple it, whatever -- and then drop it on top of the other one.

Brouwer said that there will be one point on the deformed copy of the map that is exactly on top of the corresponding point on the other map. 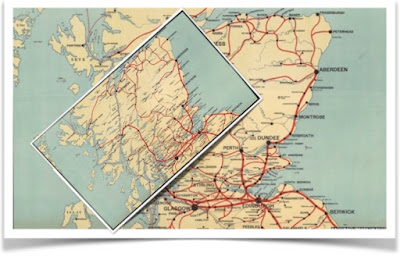 It even works on three dimensions.  If I stir my cup of coffee, at any given time there will be at least one coffee molecule that is in exactly the same position it was in before I stirred the cup.

Speaking of which, all this is turning my brain to mush.  I think I need to get more coffee before I go on to...

You might think that infinite is infinite.  If something goes on forever, it just... does.

Let's define "countable" first.  It's simple enough; if I can uniquely assign a natural number (1, 2, 3, 4...) to the members of a set, it's a countable set.  It may go on forever, but if I took long enough I could assign each member a unique number, and leave none out.

So, the set of natural numbers is itself a countable set.  Hopefully obviously.

So there are exactly the same number in both sets.

Nope.  Both are infinite, but they're different kinds of infinite.

Suppose you tried to come up with a countable list of real numbers between zero and one, the same as we came up with a countable list of odd numbers above.  (Let's not worry about the whole number line, even.  Just the ones between zero and one.)  As I mentioned above, if you can do a one-to-one correspondence between the natural numbers and the members of that list, without leaving any out, then you've got a countable infinity.  So here are a few members of that list:

And so forth.  You get the idea.

So there are more numbers between zero and one on the number line than there are natural numbers.  Infinitely more.

I'm going to end with one I'm still trying to wrap my brain around.  This one is courtesy of British mathematician Bertrand Russell, and is called Russell's Paradox in his honor.

First, let's define two kind of sets:
Russell came up with a simple idea: he looked at "the set of all possible normal sets."  Let's call that set R.  Now here's the question:

Is R normal or abnormal?

Thanks, I'll show myself out.