There's something about the very large and the very small that never fails to be awe-inspiring.

I remember when my eighth grade science teacher was trying to impress upon us how tiny atoms were.  She asked us to think about how many atoms were in a typical raindrop.  Then she asked, "If you had the same number of grains of sand as there are atoms in a raindrop, how much sand would you have?"

The guesses were all over the place.  A bucket full.  A dump truck full.  A whole beach full.

But no, she said.  If you had as many grains of sand as there are atoms in a raindrop, you'd have enough to fill a trench a kilometer deep, three kilometers across...

... stretching all the way around the world at the equator.

I've since tried to do some ballpark estimation to see if this is right, and it appears to be pretty damn close.  If anything, it's an underestimate.

Then there's the world of the very large.  Voyager 1, one of the fastest spacecraft ever launched (hit speeds of 17 kilometers per second).  At those speeds, how long would it take to reach the nearest star other than the Sun -- Alpha Centauri?

Yeah, the universe we live in is a place of extremes.  But since we live in that middle zone in between, our brains aren't all that well-equipped to comprehend those extremes.  It doesn't take much before we simply boggle.  "Okay, that's small," or "okay, that's big," and we can't really get past that.  This, I think, is why the average U. S. citizen isn't all that concerned when (s)he hears that the federal deficit is now nudging close to one trillion dollars.

I have to watch that tendency myself, and I consider myself at least above average at mathematics.  Which is why I had to do a little mental arithmetic when I read a paper published this week in Nature about one of the biggest, most powerful phenomena known -- a gamma-ray burster. 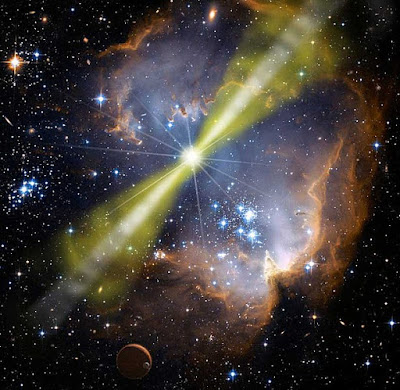 Artist's depiction of a gamma-ray burster [Image is in the Public Domain, courtesy of NASA/JPL]

Gamma-ray bursters are basically the death screams of enormous supergiant stars.  When one of those becomes a supernova, on its way to its final destination as a black hole, the shock waves from the explosion smash into the clouds of gas and debris moving outward from the star's surface, but traveling more slowly than the shock waves are.  This pumps energy into the gas clouds and triggers them to emit light.  Then the electrons freed by the collision slingshot even more energy into the light in a process called inverse Compton scattering.

The result is a jet of electromagnetic radiation like nothing else in the universe.  As spectacular as it is, it would be no fun to witness up close.  Any planet anywhere near -- and by near, keep in mind that I mean hundreds of light years -- would be flash-fried within milliseconds.

Here's something to wrap your head around.  One of the more familiar units of energy to science types is the electron volt.  What exactly it means, and why it's named that, isn't really critical here, but to give you a feel for it, your average photon of visible light carries with it an energy on the order of between one and three electron volts.

This week's paper describes the capture, by the two MAGIC (Major Atmospheric Gamma Imaging Cherenkov) Telescopes on the island of La Palma in the Canary Islands, of photons from a gamma-ray burster that carried one trillion electron volts of energy.  (There's no reason for concern, however.  The explosion in question took place 4.5 billion light years away, so by the time it got here, the energetic remnants were barely more than a blip.)

Here's another comparison, if that one wasn't enough for you.  Gamma-ray bursts of this type generally last between a few seconds and two minutes.  And in that time, more energy is released than the Sun will release in its entire lifetime.

At that point, my brain kind of goes into vapor lock and freezes up.  All I'm left with is the feeling of being very, very small.

Which is not necessarily a bad thing.  We humans tend to get a bit cocky at times, and it's good that sometimes we're reminded we're little fish in an extremely big pond.  The problems and day-to-day struggles we face down here are, in the grand scheme of things, insignificant.

On the other hand, I'm still pretty freakin' worried about the federal deficit.