Anatomy of a personal u-turn

Two years ago, a paper appeared in the Journal of Humanistic Psychology called, "How Personal Transformation Occurs Following a Single Peak Experience in Nature: A Phenomenological Account."  The authors, Lia Naor and Ofra Mayseless of the University of Haifa, describe the experiences of fifteen individuals who reported a sudden positive transformation in their lives -- a personal quantum leap, as it were -- that resulted in long-lasting changes to their outlook, self-awareness, mood, and well-being.

It's been known for years that a single traumatic negative experience can cause devastating damage to a person's psyche, the authors said; why, then, has so little attention been given to the potential for equivalent positive changes from single peak experiences?  The entire article is well worth reading, but one paragraph stood out to me:


The results of this study shed light on the nature of profound meaning and real knowledge, in which unconscious or contradictory aspects of self (regarding inner strength and personal potential) were discovered.  The actual moment of insight was cognitive, perceptual, and emotional, and although not lengthy, substantial knowledge became conscious that involved embracing and repossessing those aspects of the self through which new self and world perceptions were created...  [T]he concrete and personal experience seemed to validate those aspects hence perceived as authentic inner truth, enabling the participant to internalize them as integral and empowering aspects of self.  From this perspective, the experience is a step in the process of personal growth and when perceived and treated as such, may contribute significant personal knowledge to the process.

Had I read this two weeks ago, I would have been largely disinclined to believe it.  Unquantifiable, unmeasurable phenomena like "personal potential" and "inner truth" have always seemed so subjective to me as to be nearly meaningless.

Also, I've blogged before about my struggles with anxiety and depression, troubles that have been with me as long as I can recall and which probably owe their origin equally to genetics and to a home environment when I was a child that was, even putting the best face on it I can, not easy.  The idea that all that could turn around in a veritable instant would have seemed ridiculous.

But it's not.  Because it happened to me. 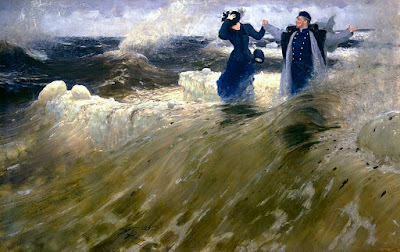 A week ago I attended a men's retreat called "Break Your Chains" at a local retreat center.  The weekend was led by John Aigner, a German life coach and mentor, and the informational website described it as a way of shucking old, self-destructive patterns and learning strategies for revitalizing your life.  All of this sounded good to me.  Just what I needed, actually.  I'd come across the upcoming retreat more or less by accident, and before I could decide otherwise I signed up.

However, the closer it got, the more dubious I became.  I'd been sliding into a full-blown depressive episode for some weeks, and in the week before the retreat, I came damn close to talking myself out of attending.  It was just going to be more happy-talk about pulling yourself up by your own bootstraps, I was sure of it, and besides, one of my issues is calling attention to myself.  It sounded like the activities during the retreat were going to be largely participatory -- little to no sitting and listening passively -- and the thought that I'd be baring my soul to a bunch of strangers, all of whom were looking at me, was somewhere between distasteful and terrifying.

But Friday came, and I couldn't think of a good excuse.  Oh, well, it was just forty-eight hours.  I'd survive.

So I got in my car and drove to the retreat center.

Out of respect for the privacy of the fourteen other men who participated, and also because John requested that we not reveal the exact activities during the retreat -- not out of any Secrecy from Non-Intitiates, but because future participants shouldn't be cheated of the surprise and delight of where the process takes them -- I'm not going to give a lot of details.  Suffice it to say it was largely about reconnecting body to mind, something I've struggled with forever; the way I've put it is that I feel like I have two brains, a cognitive one and an emotional one, and they are not on speaking terms.  The other part was about creating connections to other people, which is something else I've never found easy.

It became apparent within the first hour that if I didn't throw myself into the process, I was going to gain nothing from it.  So Friday evening, I sort of said, "Fuck it, what do I have to lose?" and pitched myself in headfirst.

I'm not foolish enough to think that this one event solved all my problems, nor that my difficulties with depression and anxiety are vanquished.  John warned us about how easy it is to sink back into your previous patterns as soon as you're back in the old context of work, family demands, and the various distractions and difficulties that the world inevitably brings.  But something fundamental in me got knocked loose during that weekend, something that's been stuck for a very long time.  And I think -- I hope -- I'll never be quite the same again.

I'm still processing a lot of what I learned and experienced during that forty-eight hours.  I know that continuing to integrate that into my life -- not to slip backward to where I was -- will take effort.  But one of the deepest realizations I had was that whatever headway I made, I was not going to get dragged back without putting up a hell of a fight.  The constant fear and anxiety, the habit of caution and guardedness toward everything and everyone, was nowhere I'd choose to be, and if there was a way out, I'd take it even if it required a lot of work.

I'd made a u-turn, and I couldn't afford to waste the opportunity it afforded me.

I'll end with a quote from another piece of research, this one by CaSondra Devine and William Sparks of Queens University.  In their 2014 paper "Defining Moments: Toward a Comprehensive Theory of Personal Transformation," from the Journal of Humanities and Social Sciences, they write, regarding patients who described positive transformative experiences:


The quick fixes to mask reality did not work anymore.  A way out did not seem possible, and then realization set in.  A choice had to be made between living or dying.  To choose life meant to pick up the pieces and access resources that could assist.  To choose death was to allow thoughts, guilt, shame, remorse, anger, rage, hurt, and past to consume their identity...  [The] participants... chose to live.  When [they] were asked where they would be had they chosen a different direction, they unanimously had responses that limited their quality of life.  It is my belief that the very instant that the individuals chose to live was their defining moment towards personal transformation.