Been there, done that

One of the strangest and most ubiquitous sensations is déjà vu, that bizarre sense that you're experiencing something that's happened before.  The name is French and means "already seen," but for some of us -- myself included -- the experience is almost always auditory.  It doesn't happen often, but when it does, it's absolutely convincing.  The last really striking experience I had with déjà vu occurred about three years ago, when I was talking to the seventh-grade life science teacher about some interesting concept in genetics, and I was suddenly certain that I'd had this conversation before.

I recognized it -- the exchange, where we were standing, what we were discussing, even what particular words were spoken.  It was uncanny -- and unnerving.  My perplexity must have shown in my face, because my colleague said, "What's wrong?"  I explained to her what was going on, and asked if we'd discussed this before.

But her reassurance did nothing to change the feeling.  After the discussion was over, I was still sure -- despite my rational knowledge to the contrary -- that she and I had had that exact conversation before. 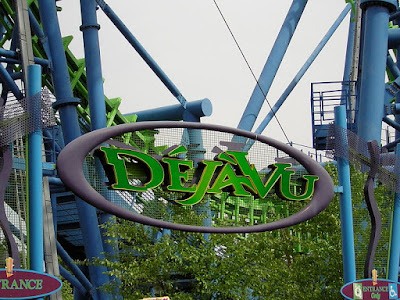 I've heard a few explanations of déjà vu, none of them convincing.  Certainly, the paranormal ones don't seem to me to hold any water -- that it's evidence of reincarnation, or precognition, or astral transport (the subject having visited the place in spectral form, apparently), or telepathy (you're picking up the memories of someone else).  One at least minimally plausible one is that the information our brain is receiving from the senses is out of sync with our processing, so by the time the input is integrated and interpreted the sensory parts register it as already having happened.  But even this one doesn't make a lot of sense, given what I know of neuroscience; the time for sensory processing and interpretation in a normally-functioning brain is on the scale of milliseconds, so it seems highly unlikely to me that there could be a significant enough delay in one branch of the system to account for some kind of out-of-sync reception of the signal.

Last week, though, a study from Colorado State University was published in Psychonomic Bulletin & Review that is the first explanation of the phenomenon I've heard that really makes sense.  In "A Postdictive Bias Associated With Déjà Vu," Anne M. Cleary, Andrew M. Huebert, Katherine L. McNeely-White, and Kimberly S. Spahr show that in the middle of an episode of déjà vu, we're actually lousy at predicting what's going to happen next (which surely should occur if we really did somehow live through this moment before), but that the familiarity of some feature of the event triggers a response in the brain after the fact that gives rise to the feeling we knew what was going to happen before it did.


Recent research links reports of déjà vu – the feeling of having experienced something before despite knowing otherwise – with an illusory feeling of prediction.  In the present study, a new finding is presented in which reports of déjà vu are associated not only with a predictive bias, but also with a postdictive bias, whereby people are more likely to feel that an event unfolded as expected after the event prompted déjà vu than after it did not.  During a virtual tour, feelings of predicting the next turn were more likely during reported déjà vu, as in prior research.  Then, after actually seeing the turn, participants exhibited a postdictive bias toward feeling that the scene unfolded as expected following déjà vu reports.  This postdictive bias following déjà vu reports was associated with higher perceived scene familiarity intensity.  A potential reason for this association may be that high familiarity intensity as an event outcome unfolds falsely signals confirmatory evidence of having sensed all along how it would unfold.

"If the entire scene feels intensely familiar as it unfolds, that might trick our brains into thinking we got it right after all," said study lead author Anne Cleary, in an interview with Science Daily. "Because it felt so familiar as you were going through it, it felt like you knew all along how it was going to go, even if that could not have been the case."

So unfortunately for those who like a supernatural explanation for things, it looks like déjà vu might well be another case of our brain being presented with conflicting explanations for something, and putting them together the best way it can (which in this case, is wrong).  In that sense, it's a little like those optical illusions showing forks with three prongs at one end and two at the other, or circular staircases that keep rising but end up where they started.  Your brain tries to shoehorn what it's getting into some kind of sense, and ends up with an incomplete, or outright erroneous, picture of things.

What I find funny is that even though this explanation makes good sense to me, when I experience déjà vu I am still left with the completely persuasive feeling that something uncanny has happened.  All of which once again illustrates that even us skeptics aren't as purely rational as we'd like to be -- or as we'd like everyone to think we are.